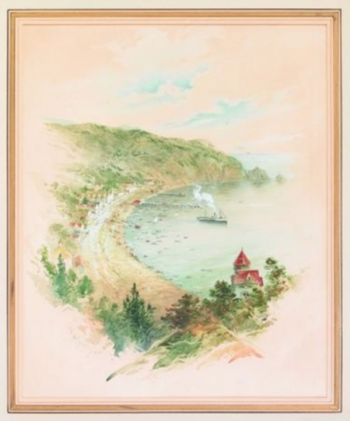 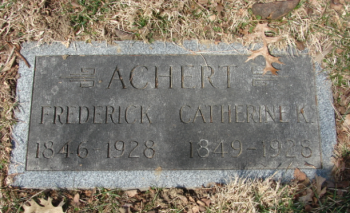 ACHERT, Fred (1847-1928) German-born lithographer and artist living in America in the late 19th - early 20th century. Born in 1847 in Europe, he lived in New York from 1862, then in Cincinnati where he was a member of the Cincinnati Art Club. He visited California sometime prior to 1903, based on a 1903 newspaper article that mentions a California work of art.

His c. 1902 water color of Avalon Bay has incredible attention to detail. With a hand lens, one can count the lifeboats on the Hermosa leaving the harbor.

December 4, 1895 [Cincinnati Enquirer]: “A striking display, quite novel in its nature, is now to be seen on Fourth Street, near Main, under the Keck Jewelry Co. It is an exhibit of specimens of lithographic work, the maiden production of the Fred Achert Lith. Art and Mfg. Co., an establishment but a few months old, but already well known to and received by the manufacturers of Cincinnati, as the wonderful proofs on exhibition will readily demonstrate.”

April 4, 1928 [Cincinnati Enquirer]: “Old lithographer dies. Funeral services for Fred Achert to be held today. Funeral services for Fred Achert, 81 years old, retired, one of Cincinnati's first designing lithographers who died on Monday night at this home, 235 Hearne Avenue, Avondale, will be conducted this afternoon at 1:30 o'clock at his residence. Mr. Achert, who for many years was engaged in the work which included the designing and execution of thousands of diplomas memoria's, testimonials and various other articles of that kind. He also gained somewhat of a reputation as a landscape artist. Surviving him are his widow, Mrs. Catherine Achert; a son, William K. Achert, general manager of the Erie Lithographing Company, Reading, Penn/, and two daughters, Mrs. Alice Koch and Mrs. Kessie Koch, both of Cincinnati.”