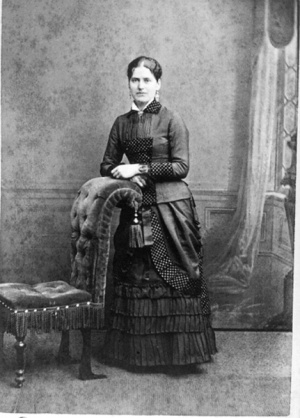 ACKLEY, Matilda May Nevins (1856-1942), Iowa-born, one of seven children who gained her appreciation of botany late in life (in her mid sixties). Ackley visited Santa Cruz Island the weekend of September 1-3, 1928 with The Nature Club of Southern California. The trip was led by Ralph Hoffmann of the Santa Barbara Museum of Natural History. Robert H. Canterbury and Theodore Payne were also on the trip. Canterbury, then gardener at the Santa Barbara Botanic Garden, “armed with shovel and gunny sacks, scoured the canyons and chaparral slopes for roots and seeds to be added to the island group in the garden.” Payne was “filling his bags with seeds of Eriogonum arborescens…” [SBMNH leaflet October 1928].

On her island trip, May Ackley collected plant specimens around Prisoners’ Harbor and Pelican Bay. Sixteen of her specimens are housed at the Santa Barbara Botanic Garden. A. Cookman, E. Benjamine and A. B. Maescher collected ornithological specimens.