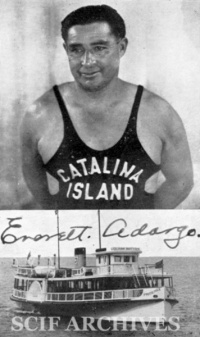 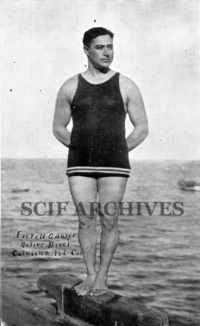 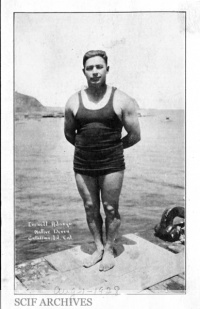 June 12, 1904 [LAT/SCat]: “Avalon. The Avalon schools had their graduating exercises at the Congregational Church last evening… Among those participating in the presentation were… Miss Rosie Adargo… and Everett Adargo…”

February 20, 1917 [TI/Avalon]: “Everett Adargo, who has been wintering on the mainland, returned Sunday to work for the Meteor Boat Company.”

May 1, 1917 [TI/Avalon]: “While the launch Adelaide was returning from Seal Rocks a party of hikers stranded on the hillside signaled for assistance. Everett Adargo, who was also coming along in another launch, went ashore and rescued the hikers from their perilous position. It happened Sunday afternoon, and the launch Adelaide brought the hikers back to Avalon.”

May 28, 1918 [TI/Avalon]: “Captain E. Adargo, who has been wintering in Los Angeles, returned to Avalon last week to take charge of one of the glass-bottom power boats for the Meteor Boat Company.”

July 16, 1918 [TI/Avalon]: “’I felt like I ws going down an elevator, suddenly,’ said Captain Everett Adargo in describing his feelings after the struggle between himself as a ‘fish,’ and Captain Sam Westbrook as the angler, when the angler succeeded in recovering 180 feet of line in 15 minutes, despite the swimmer’s best efforts to escape… Captain Adargo was born in Wilmington 27 years ago, and for twenty years he has been almost daily in the water. He is one of the most powerful swimmers on the Pacific Coast… In a recent motion picture film made at Santa Cruz Island, featuring William Farnum, Captain Adargo plunged into fifteen feet of water from the top of a precipitous rock fifty feet high. For five years he has been an exhibition swimmer and diver for the Meteor Boat Company…”

September 6, 1921 [TI/Avalon]: “Everett Adargo, native Catalina diver. Not the least attraction of the submarine garden boats are the deep sea divers. Among these Everett Adargo is one of the best-known by reason of having been an almost life-long resident of the island. Indeed, he is known as the native diver. Mr. Adargo has a record of remaining 3 minutes and 15 seconds under water, and diving to a depth of 56 feet. He weighs 190 pounds and is credited with having the remarkable chest expansion of 5 inches. He accompanies the glass-bottom boats almost daily, and dives winter and summer… Mr. Adargo is happily married, his charming wife and two boys occupying the old homestead on Whittley Avenue.”

October 1, 1924 [TI/Avalon]: “Captain Everett Adargo and Mr. H. P. Vedder went to Los Angeles Sunday afternoon to bring back the glass-bottomed boat Empress, which has been on the dry dock at Los Angeles harbor, having the woodwork below the waterline painted with copper paint.”

December 31, 1924 [TI/Avalon]: “Captain and Mrs. Everett Adargo had a regular family reunion Christmas day at their home on Whittley Avenue. Among those present were Mr. and Mrs. J. W. McClintock and children, of Los Angeles; Mr. and Mrs. Paul Tanernier, of Alhambra; Mr. and Mrs. M. L. James, of Avalon; Mr. and Mrs. Don Godman and daughter, of Los Angeles; Peter Adargo, Mrs. K. C. Kendrick, Mrs. J. W. St. John, Mr. L. Passarilli and Captain Joe Adargo. Captain Alec Adargo, who was in Los Angeles at the time the 'big doin's' was announced, started post haste for Avalon. He missed the train at Los Angeles by one minute; jumped into a taxi and started for Wilmington. Going through Compton the taxi's starboard wheel lost its air, and Capt. Alec, after assisting the driver to change tires, rolled into the Catalina Terminal at Wilmington just as the steamship Avalon was about 30 feet away from the dock. However, despite Alec's misfortune he phoned to the merrymakers and told them to 'have a good time,' and save a 'junk of turkey' for his arrival on the 26th.”

April 29, 1971 [TI/Avalon]: “A Requiem Mass for Everett Adargo, a resident of Avalon for more than 50 years, was held Thursday, April 22, at St. Anthony’s Church in San Gabriel. Adargo was born on March 28, 1891 in Wilmington and came to the island with his parents while still a baby. As a youngster, he spent this time diving for coins and working on the family boats. When the Wrigleys purchased the first glass-bottomed boat, he developed a diving routine in the submarine gardens. For years he thrilled the tourists always bringing them an abalone shell or some form of submarine life at the conclusion of the dive. At one time, he held the world’s underwater record of three minutes, fifteen seconds. This was with no swimming aids whatsoever. World War II terminated his job and he went to the mainland to work in the shipyards. He returned to the island and to the Whittley Avenue family home at the end of the war. After his wife, Candace, passed away, he moved to his son’s home in Garden Grove where he resided until his death. He was preceded in death by his son, Everett, Jr., who also died this last month [April 6, 1971]. He is survived by his daughter, Sue Goulet of Temple City; his son, Kendrick, of Garden Grove; his sister, Catalina Godman of San Gabriel; and six grandchildren: Grant Heavener, Kendrick, Christopher, Megin, Bridget, Candace and Chuck Adargo. Burial was in Resurrection Cemetery in San Gabriel.”