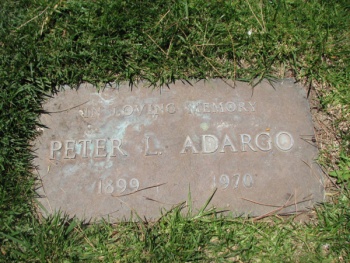 ADARGO, Peter “Pete” Lawrence (1899-1970) [SS#551-24-2532], Avalon-born “Mr. Catalina”, the youngest of seven children born to Joseph and Lola Adargo, he worked on the Santa Catalina-bound steamships as an announcer from 1919, giving passengers an introduction to the history of the island. His father, Joseph, worked with the Banning Company. Pete Adargo died in Lomita and is buried in Avalon Municipal Cemetery.

December 10, 1970 [TI/Avalon]: “The community of Avalon was saddened to hear that Pete Adargo passed away at his home in Lomita last week. Born in Avalon in 1899, Pete was a member of an early California family who owned and operated fishing and pleasure boats during the time the Banning Brothers owned Catalina. His father acted as the Banning Company’s chief guide for hunting parties. As a child Pete accompanied his father on hunting trips and came to know the interior of the island well. He also helped his older brothers on the family boats and was one of the native coin divers. His grandmother planted the first fig tree at Howland’s Landing which is now over 100 years old and still bears fruit. In 1919 Pete started working on the steamers to the mainland and during the two years that followed found himself selling tickets and answering innumerable questions of interested passengers. One day, in an effort to give information without having to repeat it several times to small groups, he picked up a megaphone on the bridge and began talking to people on the deck below. The idea caught on quickly and he was asked to continue the talks. When the route of the steamer was changed to give the passengers a view of the coastline of Santa Catalina Island, the man who knew the island so intimately pointed out places of interest and told the story to the people as only he could. For 37 years he talked to millions of people from all over the world acquainting them with the history of the island and San Pedro Harbor. On Wednesday, December 2, Pete was buried in Avalon Cemetery on the island he loved so well. A Mass was recited by Father Navin at St. Catherine’s Church. Pete is survived by his wife, Audrey, his children, Steve, John, Bill, Joanne and Barbara, all of Lomita. He is also survived by a brother, Everett Adargo, and a sister, Catalina Godman.”