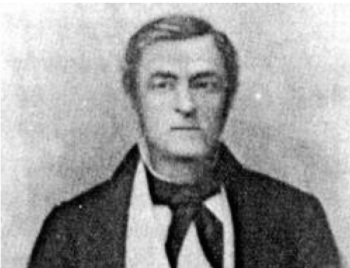 AGUIRRE, José Antonio (1799-1860), a native of Basque, Spain, and wealthy trader who came to Upper California from Mexico in 1834. Aguirre owned several vessels, including the brigs Leonidas and Joven Guipuzoana. From about 1838 he called Santa Barbara home. In 1839, Aguirre acted as attorney in fact for Andres Castillero before Governor Alvarado when Santa Cruz Island was granted to Castillero. Castillero originally chose the island of Santa Catalina, but Aguirre presented the request for Santa Cruz Island, stating on behalf of Castillero the island of Santa Catalina was “wholly unfit either for agricultural improvements or the raising of stock.”

In 1841, Aguirre built an adobe on the corner of Anacapa and Carrillo streets, and the following year he married María del Rosario Estudillo. In 1843 Aguirre was granted Tejon Rancho. January 14, 1847 Andres Castillero wrote to Aguirre directing him to place Castillero’s title to the Island of Santa Cruz in the name of Alexander Forbes, and hence under the protection of the British Government. This was not needed, as title was placed in the name of Andres Castillero until 1857 when it was transferred to William Eustace Barron.

In 1852 when Andres Castillero’s grant of Santa Cruz Island went before the U.S. Land Commission for affirmation, Aguirre claimed an interest in Santa Cruz Island. In support of Aguirre’s claim, former Governor Alvarado swore that in 1838 Castillero had told him that Aguirre was promised one half of the island for taking care of it. Despite this testimony, Aguirre’s claim was not recognized.

California historian H. H. Bancroft described Aguirre as “a man of great size. A fine presence, affable in manor and well liked by all. An excellent type of the old time Spanish merchant, keeping aloof for the most part from smuggling and politics.” Aguirre’s second wife was a sister of his first. He died in San Diego in 1860.

Duflot de Mofras (translated version) notes: Jose Antonio Aguirre was one of the most prominent merchants of that day, carrying on trade with Manila, Canton, and Mexico. At this time, Aguirre, who had been married to a member of the Estudillo family, owned the finest residence in Santa Barbara. Long a landmark on Carrillo Street, it is now demolished. [DuFlot de Mofras' Travels on the Pacific Coast (p. 247)]