AH POY (fl. 1900-1909) of Santa Barbara had a contract to gather abalone on Santa Cruz Island after the turn of the century. According to Helen Caire: “What the owners got is indicated by a letter in existence written to the Caire Co. in 1908, by Ah Poy of Santa Barbara, asking to renew his old contract at Santa Cruz Island, in the same terms as previously, one hundred fifty pounds out of every one thousand pounds that are gathered both of meats and shells.” (Caire 1993). 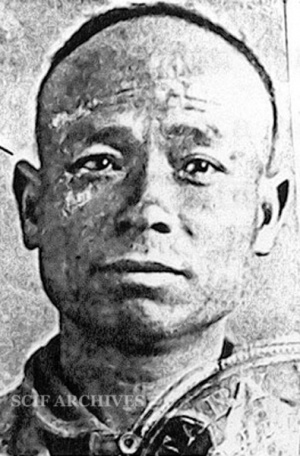 August 22, 1900 [SBMP]: “Late yesterday afternoon constables Hopkins and Sansome arrested William Gerald and Frank Reina on a complaint sworn by Ah Poy, who charges them with Grand Larceny. He alleges in the complaint that William Gerald, Frank Reina and John Doe stole from him 43 sacks of abalone shells and 20 sacks of abalone meat, valued at $150. The thieves stole the abalone shells and meat at the islands, and there sailed in their boat to Gaviota where they shipped the stuff to San Francisco. It is claimed that there is a clear case against the accused. On being arrested they were brought before Justice Wheaton, who, at the request of the accused’s council, set the 27th at ten o’clock. Their bail was fixed at $1000 each. Witnesses will be brought from the islands and San Francisco for the prosecution. Also wharfinger McNealy of Gaviota.”

August 28, 1900 [SBMP]: “Were held to answer… Abalone thieves put no defense and were bound over. S. E. Crow is their attorney. The preliminary examination of William Gerald and Frank Reina were held before Justice Wheaton yesterday on the charge of Grand Larceny. They were both held to answer to the superior court on the same charge. Gerald and Reina were arrested on Wednesday on a warrant, sworn to by Ah Poy, charging them with stealing 40 sacks of abalone shells and 20 sacks of abalone meat. In the examination yesterday, it was learned that Gerald and Reina were engaged with their boat to take P. E. L. Hillyer and a party to the islands on a cruise. After leaving the party on the island, the defendants left for a short trip, agreeing to be back at a staged time. When they returned somewhat later than the agreed time, they stated that they were becalmed and could not get back. Wharfinger McNealy of Gaviota testified that during that identical time the defendants came to Gaviota, and from there shipped about 60 sacks of abalones to San Francisco. The defendants, represented by S. E. Crow, Esq. put up no defense, and were held to answer to the Superior Court by Justice Wheaton.”

August 22, 1905 [LAT/SB]: “[State Fish and Game patrolman H. J.] Abels is making a general raid of all abalone camps on the Channel Islands, and is causing the wholesale arrest of Chinese abalone fishermen for having in their possession the shells of abalones that are under the required size of twelve inches in circumference. Ah Poy and Ah Jim were brought in by him on Sunday, and will plead before Justice Wheaton tomorrow. C. L. Jung, A. Que and Ton King have also been arrested on the same charge. Each of them was fined $25, and they have been released. Mr. Abels leaves today for San Miguel Island in search of others who are disobeying the game laws.”

November 30, 1907 [George Nidever to Santa Cruz Island Company]: “Dear Sir, …I suppose you know a Chinaman by the name of Ah Poy. He was in Santa Cruz Island 2 or 3 years ago picking abalones and seaweed. He was here yesterday to see me and want me to ask you if [you will] let him go to the island again and pick abalone and seaweed on the same terms he was then…”

1908 Fred Caire stated: “the Chinese who gather abalone and sea weed have caused less trouble on the island than Americans. They pay a small rent for the use of the land and this has served to regulate their actions.” Ah Poy of Santa Barbara had a contract for abalone gathering on Santa Cruz Island.

August 31, 1908 [SBI]: “Four Santa Barbara Chinamen returned from Santa Cruz Island this morning on the large cattle schooner, Santa Rosa, which they had chartered to carry to this city one of the largest shipments of abalone shells and cured abalone meat ever taken from the Santa Barbara Islands in a single season. The party has been in camp on the south side of Santa Cruz Island for three months. The cargo which is being unloaded today consists of 12 tons of shells, worth $50 per ton, six tons of cured abalone meat valued at $160 per ton, and two tons of sea grass, which Chinese people use in manufacture of a condiment that is exceedingly popular with the Celestials. The four Chinamen will earn nearly $2000 as the result of their three months’ work. The party was managed by Ah Poy and financed by You Kee, a merchant on Canon Perdido Street. The 12 tons of abalone shells, packed into 500 gunny sacks, were purchased today by G. M. McGuire of this city, who will ship them to factories where they are made into ornaments including buttons, cuff buttons, and trinkets. The abalone meat, which was cured by the Chinamen on the island, will be sold to San Francisco and shipped either to Honolulu or China. Abalone meat is popular both with Japanese and Chinese.”

March 17, 1909 [SBMP]: “Overdue again, this time from San Miguel Island, the power schooner Gussie M in charge of Captain Vasquez, with Captain William G. Waters, his sheep shearers and Ah Poy, the abalone fisher on board, is hourly expected. The little vessel sailed from here some time days ago to bring back the people from the island, but it is believed that severe storms which have not been felt here, have prevented the schooner from making a landing or from loading the passengers and freight homeward bound. Captain McGuire, the schooner’s owner, stated yesterday that he felt no apprehension for the safety of his craft...”

March 19, 1909 [SBMP]: “With Captain Colice Vasquez, half-owner of the vessel, at the wheel, the power schooner Gussie M arrived in this harbor yesterday from San Miguel Island after a tempestuous voyage that tried the seamanship and patience of even this rugged veteran of the briny. The schooner brought in Captain William G. Waters and his sheep shearers, but the stormy weather prevented loading several tons of abalone meat and a number of tons of abalone shell, to say nothing of Ah Poy, the Chinese abalone fisher, and his men. The latter are still on the island and Captain Vasquez will have to make another trip to bring them home… As the result of the Chinese boycott of abalones from Japan, the price for American-caught abalone has soared more than 100 percent. Where formerly the price ranged from 5 to 7 cents per pound, it has now reached 10 to 12 cents. Captain McGuire shipped more than 56,000 pounds of abalone shells, the accumulation of 18 months, to New York via Panama last week. This is the largest consignment of abalone shells ever shipped out of here.”

August 14, 1909 [SBI]: “Fred F. Caire, of San Francisco, who with other members of the Caire family hold the title to Santa Cruz, largest of the Santa Barbara group of islands, announced today that it may be necessary to establish a patrol along the shores of the island and eject all campers who do not hold permits from the family of the management... Mr. Caire said the Chinese who gather abalone and sea weed have caused less trouble on the island than Americans. They pay a small rent for the use of the land and this has served to regulate their actions...’”