February 5, 1916 [SBMP]: “Phantom flier and warship fuss about. Mysterious movements attested to by two ranchers in Goleta. Is a fierce and hostile warship hovering off the coast of Goleta, egged on by a nasty little aeroplane, snooping through the air and rubbering to glean points on which to base an attack on our altars and our fires?...Unfortunately, the Sea Wolf is on the other side of the channel just now, but she may return to her home port today, and perhaps we can get Captain Eaton to organize a scouting expedition to rush up to the troubled salty waters off the port of Goleta and see what is up...”

1920s: An overloaded rum running plane crashed at Christy Beach upon take-off during Prohibition. The wheel hubs and a few parts of the plane remain visible semi-buried in mud on the upper beach flats. The site is 200 yards north of Cessna 182B [N7254E].

March 4, 1921 [SBMP]: “Zenith official plans to Santa Cruz today. With fair weather in prospect, R. J. Schmidt, president of the Zenith Aviation Company, and Lieut. H. H. Holloway planned last night to make today the first trip to Santa Cruz Island in the company's new sea plane. They expected to land in Pelican Bay and reconnoiter for a beach suitable as a place for landing tourists. The plane will be available for tourist trips to the island for a month, after which, Mr. Schmidt said, it will be taken to Neptune Beach in Alameda where Lieutenant Holloway flew last summer. Mr. Schmidt said the plane was capable of making the trip to the island and back with two passengers and pilot in an hour.”

July 30, 1922 [SBMP]: “Blazing airplane or meteor? Startling aerial pyrotechnics seen near Santa Cruz Island. Brilliant display seen after object thought to have struck land or water; visible to persons as far south as Ventura, reported. Did an aircraft fall in flames into the Santa Barbara channel about 7 o'clock last night? Or did a huge meteor fall upon Santa Cruz Island at that hour where it continued to blaze for 10 minutes or more? These were questions which persons all along this portion of the coast debated after witnessing a startling phenomenon last night. Up to an early hour this morning they had not been answered. Miss Gertrude Wright-Knox, daughter of the late Dr. S. B. P. Knox, who witnessed the strange spectacle from a point on the Cooper ranch, ten miles northwest of here, was convinced a huge meteor had fallen upon Santa Cruz Island. Robert E. Clark, who saw much of the same thing from a point in the business district of Ventura, was persuaded a burning aircraft had fallen from a great height into Santa Barbara channel, where it continued to burn for a considerable time before the wreckage sank. All accounts agree that a great flaming object had fallen from the heavens into or beyond the Santa Barbara channel and afterward continued to give off a brilliant glow for many minutes. Some placed the point at which the flaming object fell as four miles off shore between Santa Barbara and Ventura, but nearer the latter place. Some estimated the distance as six miles offshore, while others were of the opinion that the object had fallen upon Santa Cruz or one of the other Channel Islands...”

September 10, 1928 [ODC]: “A hydroplane inspection of Santa Cruz Island was made Friday by Frederick Law Olmstead, famous landscape authority selected by the State of California to pass upon the desirability of the various park sites proposed by the different localities as desirable to be included in the purchases to be made from the proposed bond issue of $6,000,000 to be voted on at the coming election… Passing over Smugglers Cove, but 30-odd fishing boats were in evidence. Before the Santa Cruz waters were over fished there have been 300 fishing boats there at one time…”

September 22, 1931 [LAT]: “Flying forester injured in trip to fire on island. Santa Barbara, Sept. 21. — County Forester Frank Dunne, flying across the channel today to Santa Cruz Island in a plane piloted by Gordon Sackett of Goleta airport, narrowly escaped death when the landing gear collapsed in making a landing on the island. Forester Dunne's back was slightly sprained and he was bruised. Pilot Sackett escaped unhurt. Later in the day a tri-motored ship flew to the island and brought the forester back. After a survey of the brush fire, burning over the island since Saturday, Dunne reported it was being under control today, and has been kept out of valuable timbered areas. Flames are still burning briskly in isolated canyons in heavy brush. Fifty fire fighters are on the lines. Frederic F. Caire, owner of the island, has not estimated the loss, although he says a large area of brush and grassland has been seared by the fire.”

July 6, 1942: Grumman JFR USMC crashed while landing at Prisoners' Harbor and sank. The five Marines aboard all swam to shore.

March 15, 1944: RP-38E piloted by John F. Fleming bailed out after a mid-air collision. Location is listed as Santa Cruz Island.

March 29, 1954: F2H Banshee out of Point Mugu piloted by Lt. Albert D. McHenry went missing in a rainstorm. Searches were conducted around the northern Channel Islands. The plane was never found.

March 30, 1954: Grumman AF-2W Guardian, a single-engine propeller-driven plane operated by the U.S. Government was searching for a missing jet aircraft. Lt. John W. Miller was piloting the plane with his two crew, Bill Burris and Walter G. Brown. Their mission was to located a missing jet aircraft. When engine trouble, the plane was successfully ditched in the water near the shore and three men reached safety on the sandy beach 150 yards away on the south side of Santa Cruz Island, east of Gull Island. Once on shore a parachute was spread out on the sand and distress flares fired. A rescue helicopter picked them up that afternoon. The location of the plane is known in 50 feet of water near Gull Island.

April 1, 1954 [LAT]: “Crew of search plane down in sea rescued. A Navy plane, one of 63 aircraft searching coastal waters for a missing Navy jet pilot, crash-landed on the ocean near Santa Cruz Island off Santa Barbara yesterday and its three crewmen were rescued by helicopter. Distress flares soaring from Santa Cruz Island brought brief hopes that Lt. Albert McHenry, 30-year-old Banshee pilot, might still be alive, until the crew of the ditched plane was spotted on the island beach with parachute spread out. A helicopter was dispatched for the three men who swam to shore after landing the single-engine search plane on the water. They were identified as Lt. John W. Miller, pilot; Bill Burris and Walter G. Brown. Miller said the plane developed engine trouble and he was forced to ditch the craft. Their plane and more than three scores of others were searching the Channel Islands waters and flying some 85 miles out to sea in the hunt for McHenry, who disappeared last Monday while on a routine identification mission out of the Naval Air Missile Test Center, Point Mugu. Included in the search are aircraft of the Coast Guard, which is directing the mission: Air Force, Navy and Civil Air Patrol.” 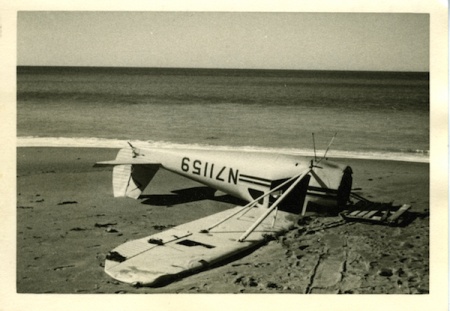 September 30, 1963: Cessna 150 [N71159] crashed on the island during take off from Christy Beach. Leland Spencer and his wife flew out of Compton Airport to Santa Cruz Island during a heat wave and landed on the beach on the island to go swimming and camping. They spent the night. The next morning the tide was high, and taking off in 1 inch of water on the south end of the beach near Kinton Point, the plane flipped. They spent a second night on the island and shot quail to eat for dinner. Fish and Game called the Coast Guard who came and retrieved them. Spencer flew back to the island with Carey Stanton's permission and salvaged the plane's engine and landing gear. He and others stayed at Christy Ranch during salvage operations. [Marla Daily pers. com. with pilot.] 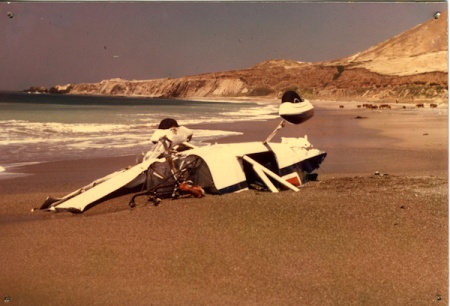 The student pilot and instructor walked away from this accident at
Pozo Beach, Santa Cruz Island, 1974

1974: Cessna 150 [ ] crash landed at Pozo Beach. A student pilot was flying with his instructor when they buzzed several cowboys moving cattle in the area. The plane was caught by a large wave and pulled into the surf. Both occupants survived, and parts of the wreckage are buried in the sand. The insurance company paid a claim to the Santa Cruz Island Company for littering the privately owned beach. 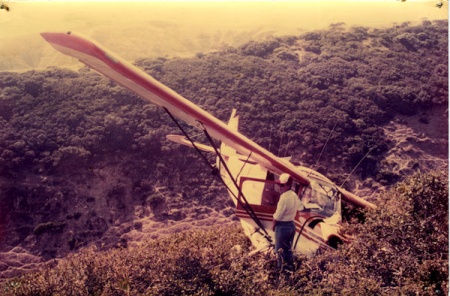 The fish-spotter pilot walked away from this accident on the isthmus,
Santa Cruz Island, 1983

September 13, 1983 [SBNP]: “Pilot disappears after island landing. Despite the puzzling "disappearance" of a pilot shortly after his airplane landed on Santa Cruz Island, the man did not appear to be hurt or engaged in an illegal activity, the Sheriff's department said. The unknown pilot refused any assistance from Navy personnel who arrived shortly after the apparent forced landing Monday afternoon. The pilot left the scene in a skiff moored nearby, a spokesman said. The Sheriff's Department, notified of the incident around 1:30 p.m., sent investigators to the island, but by that time the pilot had already obtained a ride on a larger vessel. The cargo of the plane, reportedly owned by a San Pedro fish-spotting firm, consisted of bags of dye used to mark schools of fish, the spokesman said. The pilot has 10 days to report the incident to the National Transportation Safety Board, the spokesman said, adding authorities are content to wait until then to find out the pilot's identity.” 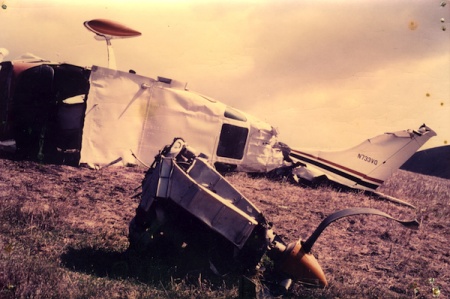 January 18, 1984 [LAT]: Cessna 206 [N733VQ] “Pilot, two passengers rescued. A pilot and two passengers were rescued by Navy and Coast Guard helicopters Wednesday night after their single-engine airplane crash-landed on Santa Cruz Island. The Coast Guard said the Cessna Turbo 206 went down on the east end of the island, about 20 miles west of Oxnard. On Board were the pilot, Gregory Johnson, 37; Darrell Davey, 45; and William Peterson, 60, all of Thousand Oaks. The U.S. National Park Service notified the Coast Guard of the incident, and the men were airlifted to St. John's Regional Medical Center in Oxnard, where a spokesman said Peterson was being treated for internal injuries. The others were transferred to a hospital near Thousand Oaks, where Johnson was treated for a gash over his right eye and Davey for a broken leg.”

January 10, 1997 [NTSB]: Beech C24R [N18892] went into the ocean when the engine quit. The two passengers swam 1/2 mile to Santa Cruz Island. The pilot reported that the engine's power reduced to near idle while cruising at 9300 feet over the Pacific Ocean. This was accompanied by tremendous engine related vibration. There was no evidence of an oil leak, and the propeller continued to rotate. The pilot further reported that he switched fuel tanks and checked the magnetos, but engine power was not restored. The pilot ditched the airplane in the ocean and swam about 1/2 mile to shore. There were no life preservers on board. The airplane has not been recovered. The U.S. Coast Guard subsequently reported that the water's depth was about 192 feet.