In the 1970s, a Stinson L-5 with two bow-hunters intending to poach elk, tried to land on the ridge just east of San Agustin Canyon. The plane hit a cattle wallow on the ridge top and broke a landing gear strut. The hunters walked into ranch headquarters in full camo-gear and complained that they had some sort of engine failure and had to make an emergency landing. They were to return the following weekend with replacement parts. According to Tim Vail (2016), it was a tube and fabric airplane like a Piper Cub. By the time they returned, the cattle had eaten the fabric off the plane, leaving them without a usable plane.

During the War: A P-51 piled up on Signal Road towards Arlington. The military removed it. Al Vail told E.K. Smith about it.

August 17, 1951 [LAT]: “Shattered propeller blade found on Santa Rosa Isle. Theory offered that it came from navy airship Macon lost off coast in 1935. A splintered 10-foot propeller section found on the eastern beach of Santa Rosa Island aroused suspicion yesterday that the wooden blades came from the giant Navy airship Macon which crashed and sank off the Monterey coast Feb. 13, 1935. But a study of pictures of the Macon taken shortly before the crash shows the dirigible carried three-bladed propellers — apparently made of metal — rather than two-bladed laminated wood props such as the Santa Rosa find. At the time of her launching in 1933, however, the Macon was driven by two-bladed propellers. The shattered prop section on Santa Rosa was returned to Vail Field by Ray Goudy, chief pilot for the W. H. (Hank) Coffin Air Service. He was told about the propeller on the beach when he landed on Santa Rosa after flying construction workers to the island. Both ends of the prop are shattered, as if broken while revolving, but the hub — 14 inches thick and 18 inches in diameter — is intact and even the threads inside a portion of the shaft housing show no evidence of impact. The find thus posed three mysteries. What type of aircraft or airship was it from? How did it happen to be in the sea and float on to Santa Rosa Island? How could it be torn from an aircraft and its tips shattered without evidence of failure somewhere in the hub section? Goudy hopes to clear up the mystery with the help of propeller experts and possibly the Navy or the Air Force.”

July 12, 1952 [Accident Report]: “At approximately 0830 PST 12 July 1952 an F-51 aircraft piloted by 1st Lt. James D. Reed crashed on the northeast portion of Santa Rosa Island, 34 degrees N. 120 degrees W, and the pilot was killed. Lieutenant Reed had been following his leader, Lt. Colonel Jack Blacker, at that time commanding officer of the 186th Fighter Bomber Squadron. Lt. Colonel Blacker had done a roll over the area, and Reed crashed while either doing a roll or trying to recover from an unusual altitude. The flight of the two F-51s had been on alert status at George AFB and were scrambled by ADC at about 0705 hours. The flight was controlled for one hour and 15 minutes underdirection of "DISHPAN" GCI...”

November 6, 1966 [Vail & Vickers records]: “On November 10, 1966 Diego [Cuevas] called from the island. Stated a plane had landed on Island November 6, 1966, apparently as an emergency. Ended up with a broken wing, broken landing gear and bent prop. Place — east end, near Old Ranch and Gull Rock. Plane apparently property of Acme Aircraft Co., Torrance Municipal Airport. Person to contact is a C. R. [Roger] Kenney, phone Davenport 64081, P. O. Box 116, Lomita, California. Plane number N1341N. Navy copter picked up one of the plane's occupants on Sunday night and left the second man with the plane. On Tuesday, November 8, 1966, a plane bearing number N4619A arrived at scene. Occupants removed radio from downed plane, and left a note in or on plane that they would return. Diego stated that no permission to land asked for or given by him to second plane landing. Possible trespass charge: Bill Cotter, DA's office, stated November 10, 1966 that Sect. 602, sub-section L, California Code, forbids entering or occupying any real property or structures without consent.”

1970s: Stinson L-5 military surplus plane crashed next to San Agustin Canyon. Pieces of the wreck are still visible. Two bow-hunters intending to poach elk, tried to land on the ridge just east of San Agustin Canyon. The plane hit a cattle wallow on the ridge top and broke a landing gear strut. The hunters walked into ranch headquarters in full camo-gear and complained that they had some sort of engine failure and had to make an emergency landing. They were to return the following weekend with replacement parts. According to Tim Vail (2016), it was a tube and fabric airplane like a Piper Cub. By the time they returned, the cattle had eaten the fabric off the plane, leaving them without a usable plane. [see photos above].

August 4, 1980 [NTSB]: “Apollo Airways, a commercial air taxi-cargo business out of Santa Barbara Airport had a Piper PA-34 [N36207] that came in too fast upon landing. It went onto its nose and sustained substantial damage when the twin propellers hit the ground. Pilot in command failed to maintain directional control.” E. K. Smith remembered the pilot “was a little short guy. He was very well-known.” E.K. Smith flew with him a lot.

May 18, 1982 [SBNP]: “A pilot's poster tells fellow fliers to stay off Santa Rosa Island. A San Diego pilot who landed illegally on Santa Rosa Island got off the legal hook by using his talents to wave off fellow fliers who might be tempted to try the same thing. The pilot, whose name was withheld as part of his agreement to cooperate with law enforcement officials, is a cartoonist who has designed a poster to warn that there is "no landing or low flight over the Channel Islands" and such activity is definitely against the law. He landed on Santa Rosa Island with two other men equipped with rifles. They bagged a hawk, but the island's owners and the district attorney bagged the hunters. The large island has proved especially appealing to hunters. Several state and federal laws can be invoked against those who violate the law, the simplest being the prohibition to land on private property without permission unless it's an emergency. Al Vail of the Vail and Vickers Cattle Co., owner of the 55,000-acre island, said that his greatest fear is fire. There is not much chance of coping with wildfire on any of the Channel Islands. He and the Deputy District Attorney Ron Zonen agreed not to press formal charges against the three hunters if they paid a "restitution" to the ranch, put in some work time on the ranch, and alerted other pilots to the prohibition. The resulting poster, showing a law officer nabbing a flier with one hand and the plane with the other, says such landings violate the state penal and public utilities codes and federal game laws. They also violate the federal Channel Islands Marine Sanctuary regulations that prohibit flying below 1,000 feet near the islands. Zonen said that another pilot has been arrested and charged for an illegal landing and will be in court soon. "It's against the law, and we will prosecute," he said, and Vail added that there are additional ways now to reduce the chances of getting by with it. He isn't disclosing details of the improved detection system. But the San Diego man is distributing a notice among fellow fliers that the cattle company has a new "get tough" policy. "This policy has been forced upon the owners of the island because the violations can and sometimes are accompanied by serious damage to the property and to the animals," the notice says. The Vails issue permits for boat landings when there is a good reason. But Al Vail says that indiscriminate landing would cause considerable damage to the island ecology and present great danger of fire and other accidents. Under legislation that established Channel Islands National park more than two years ago, the Interior Department is to acquire Santa Rosa Island, but Vail said that there have been no formal negotiations so far. Permits are also required for landing on Santa Cruz, the other privately owned island within the park boundary. They are obtained from the Gherini family for the 7,000-acre eastern end of the island, and from the Santa Cruz Island Co. in Los Angeles for the 55,000-acre area managed jointly by Carey Stanton and The Nature Conservancy. The Conservancy also conducts tours to the island. Permits for landing on Anacapa, San Miguel and Santa Barbara islands are available from the Channel Islands National Park headquarters in Ventura. Charter boat companies and naturalist organizations obtain permits for group tours.” 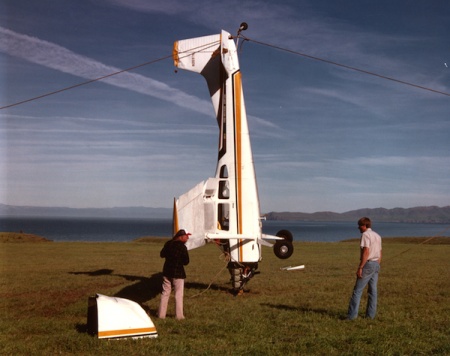 December 22, 1983 [NTSB]: “Accident Aircraft: Cessna 180K, registration N2697K. According to the pilot [Mark Gassaway (d. 2014)], the nose of the aircraft felt heavy just before lift-off and when he became airborne, he felt something was wrong with the tail of the aircraft and that he was unable to obtain full elevator response, so he aborted the takeoff. The aircraft rolled 300 to 400 feet after landing nose low. The pilot reported that he attempted to maintain full up elevator and used moderate breaking. During the last 30 to 50 feet, the prop made numerous ground strikes before the wheels struck a depression and the aircraft nosed over. An examination of the aircraft revealed no discrepancies. The pilot stated that the elevator trim was in the center (takeoff) position. Contributing factors: terrain condition rough and uneven.”

January 8, 1994 [NTSB]: “Channel Islands Aviation's Britten Norman Islander, N55JA, made a hard landing on Santa Rosa Island and cracked the wing. No injuries. The airplane was being operated as a part 135 air taxi. The pilot, Joe Akins, was landing on a dirt airstrip that was about 2600 feet long and 30 feet wide, while on final approach, the pilot reported experiencing a downdraft and the aircraft touched down hard about 10 feet short of the approach end of the runway. Subsequent inspection revealed that the wing, to which the landing gear is attached, received damage requiring replacement of about 2-1/2 feet of the rear spar. Failure of the pilot in command to maintain a proper glide path to the runway and his misjudgment of the touchdown point that resulted in an undershoot and subsequent hard landing.”