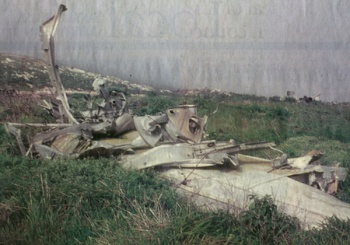 October 2, 1954 [LAT]: “Air Force seeks names in 1943 crash on island. A special Air Force identification team flew by helicopter to lonely San Miguel Island off Santa Barbara yesterday to undertake the grim task of identifying the remains of 12 crewmen killed in the crash of a Liberator bomber July 5, 1943. The World War II wreckage, more than 11 years old, was discovered several days ago and has been definitely identified as that of B-24 No. 27180 that took off from Salinas Air Force Base with eight officers and four enlisted men aboard. It was last reported two hours later near Santa Barbara and apparently the pilot attempted to crash-land the Liberator on the grassy tableland of the island some 60 miles off the California coast. Robert W. Ralston and George J. Schwaderer were assigned out of Air Material Command headquarters (Memorial Affairs Branch) to attempt identification of the crew and return the bodies to the mainland for burial, according to Brig. Gen. Victor Bertrandias, Air Force deputy inspector general, Norton Air Force Base San Bernardino. Names of the dead were withheld pending notification of next of kin. The 12 men had been listed as missing and presumably dead.”

October 3, 1954 [LAT]: “Plane crash 11 years ago linked to sea tragedy. Coast Guard cutter was en route to scene where 12 died when it collided with yacht. An 11-year-old plane crash on lonely San Miguel Island, which claimed 12 lives in 1943, yesterday contributed to a crash at sea which claimed two more. The Coast Guard cutter Morris, which collided with the yacht Aloha off Port Hueneme yesterday, was en route to San Miguel Island with a team of Air Force and civilian identification experts to search the scene where a B-24 Liberator bomber crashed with 12 crewman aboard on July 5, 1943. But two former Navy sailors yesterday told The Times that they knew of the bomber crash in 1944 and helped recover bodies at the scene then. Friday, officials at Norton Air Force Base had termed the new discovery of the wreckage by a fisherman the “’first word’ of the missing bomber since it disappeared in 1943…”

March 22, 1970 [NTSB]: “Maj. Bruce Payne, KGIL's Skywatch traffic reporter, is back in the air after a near-fatal crash into the sea off San Miguel Island. Payne and two passengers were aboard when the craft sank in less than 15 seconds. The group was submerged in 25 feet of water before struggling to the surface to begin a 50-yard swim back to the island.”

May 5, 1984 [NTSB]: “Cessna 180K [N66597]: The pilot was taking off in a 35 knot wind with the flaps extended. The aircraft became airborne in a 3 point attitude, and when 2 to 3 feet in the air, it began a left turn. Subsequently, the wing dragged the ground and the aircraft nosed over. The pilot said he should have raised the aircraft's tail earlier and not used flaps. The wind was gusting to 40 knots.” [Sandy Bredin; Reed McClusky; Ranger Tom].