On 14 Feb 1945: the planes from CVE 106 were to conduct strikes with live ammunition against a bombing area on San Clemente. Dobbin led the morning flight but found the weather unsatisfactory and returned to the ship. One plane crashed due to engine failure but the pilot was rescued. That afternoon six Avengers, three Corsairs, and two Hellcats were launched to continue training. A severe storm approached rapidly so Block Island recalled all aircraft. One Avenger successfully landed but the others were unable to land so they were vectored to San Nicolas about 120 miles away. The weather prevented landing and as a result eight aircrew and seven planes were lost. Although given vectors by Ranger (CV-4) operating nearby, the escort carrier's planes found that the weather had closed in San Nicolas, too. One "Hellcat" pilot reached the Marine Corps air station at Santa Barbara, but an "Avenger" pilot who attempted to reach San Nicolas failed. He and his two-man crew perished when the plane crashed just outside the field. Two "Corsairs" also crashed just outside the field, taking their pilots to their deaths. Maj. Vaupell tried to penetrate the overcast first at San Nicolas and then at Santa Barbara, before trying to make Bakersfield. Twenty miles short of the field, his "Avenger" crashed, and all on board died. Three others ditched successfully near San Nicolas and Santa Catalina, and the Coast Guard rescued two crews, uninjured, almost immediately while a third was picked up 12 hours later suffering from shock and exposure. All other planes landed at San Nicolas. Block Island and Childs spent the rest of that day and the next morning searching the waters off San Nicolas before returning to San Diego. 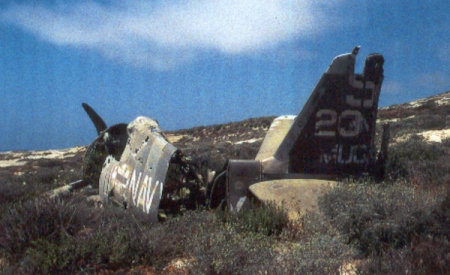 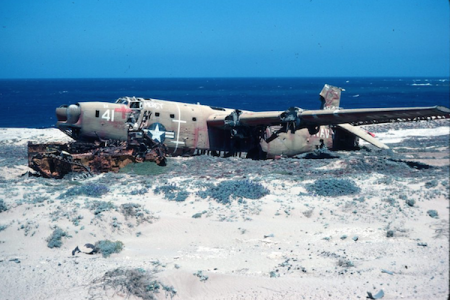 During 1967 and 1968 N.A.S C-54s made the trip with cargo and pax on Tuesdays and Thursdays. When the DC-4 had a mechanical, Mercer would occasionally run their DC-6 (the prototype) and when that wasn't available, the Admiral would lend his C-121. When all else failed, the Sikorsky S-55 would carry a few.

former Eastern Airlines relic designed to carry 14; Poddy crammed in 21 seats. Registered as since 1945 he sold it in the late '60s to Colgate Darden.

April 23, 1999 [LAT]: “San Nicolas Island. Mechanic Hurt as Jet Rolls Down Slope. A civilian mechanic working on a Navy jet on San Nicolas Island was injured Thursday when the million-dollar aircraft rolled off the runway and down a steep embankment, federal authorities said. Edwin Valadish was being treated at St. John's Regional Medical Center in Oxnard for fractured leg bones, said Doris Lance, a base spokeswoman. Lance was airlifted from the island, which is owned by the Navy and sits about 60 miles off the coast, after the 12:30 p.m. incident, officials said. He was in fair condition Thursday night and expected to undergo surgery. Naval Cmdr. Alex Hnarakis said Valadish had taxied a $1.2-million F-4 Phantom onto a runway and was sitting in the cockpit during a routine maintenance procedure. He is authorized to move the plane, Hnarakis said. The plane had burned a large amount of oil during testing Wednesday. Valadish was directed to check the problem by putting more oil in the plane, setting the brake and running the engine at a high rate of speed. During the test, the plane rolled off the runway and 50 feet down a steep embankment. The commander refused to say what position the plane came to rest in or the extent of damage. It was unclear how Valadish was injured. An accident investigation team from Point Mugu Naval Air Station was sent to the scene. Results from the investigation will be available in about three weeks, Lance said. Valadish has worked at the Point Mugu station for 11 years.”