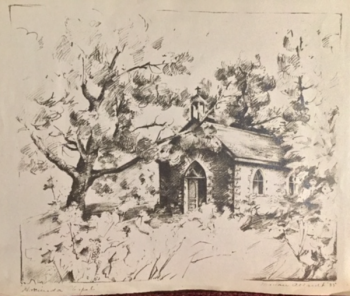 In the 1920-1930s, Marian Allardt pursued her interests in art. In 1928 and 1932 she exhibited works at the Oakland Art Gallery; and in 1931-1932 with the San Francisco Art Association. In 1930 she spent a year abroad where she studied in Paris and spent time in Italy. After the death of her parents in 1931, she lived with her aunt, Mrs. Charlotte A. Carter.

It is thought Marian Allardt was a friend of the Caire girls. She lived in Vernon Heights, which is where the two Caire homes were built on Lee Street in 1915. Presumably she made a trip to Santa Cruz Island with the Caires in 1935 where she did her drawing of the chapel.

Marian Allardt married William Gabriel in 1939 in Reno, Nevada. They had no children.

November 2, 1931 [OT]: “C. F. Allardt, noted Eastbay inventor, dies. Piedmont engineer devised emergency water system, perfected automatic press. Piedmont, Nov. 2.—Charles Ferdinand Allardt, 64, engineer and inventor, who designed the power plant of the emergency water supply system for fires on Lake Merritt, and won national recognition for other mechanical successes, died yesterday at his home, 789 Kingsford Avenue. Allardt, who was born in California, had been connected with the C.C. Moore Engineering company in San Francisco for more than 30 years. He was graduated from the University of California with the class of 1888, and was a member of the Phi Delta Theta. While employed on his first job with the Hoe Mfg. Co. he perfected an automatic press that won a golf medal at the Panama Pacific exposition in 1915. His father, a civil engineer of San Francisco, made the first survey of the San Francisco county tidelands and the first map of Alameda county. Mrs. Caroline Allardt died last December. Surviving members of the family are a daughter, Miss Marian Allardt, his mother, Mrs. George F. Allardt, and a sister, Mrs. Louise Carter.”

November 27, 1939 [OT]: “Allardt-Gabriel wedding in Reno. Slipping away to Reno over the Thanksgiving holidays, Miss Marian Allardt, daughter of the late Mr. and Mrs. Charles Allardt of Piedmont, and Mr. William Gabriel of Oakland were married Friday afternoon at 3:00 o'clock in the Federated Church in Reno. No previous announcement had been made of their engagement. The bride is gifted in art work, and following her graduation from the University of California, went abroad for a year's study in France and Italy. She will continue her studies in etchings and portraiture. Up to the time of her marriage the bride made her home with her aunt, Mrs. Charlotte A. Carter of Boulevard Way. She is also a niece of Mrs. Frederick A. Allerdt. The couple will make their home in Oakland.”