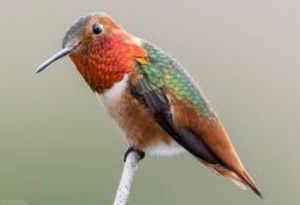 1897 San Clemente Island: “Selasphorus alleni—Allen's Hummingbird. Quite numerous along the ravines, where the metallic rattle of its wings gave notice of its presence long befoer it could be distinguished among the bright-colored flowers. I found a nest on March 28, which contained two incubated eggs. It was built at the forks of a cherry twig, five feet above the ground, in a canon. THe nest is composed of sheep's wool, with spiders' web and a few downy feathers. On the outside, it is covered with green lichens, and bits of plant fibers. The inside measurements are: diameter .90; depth .75. Outside: diameter, 1.90; depth, 1.50. The eggs measure: .54 x .35, .55 x .36. On May 31 and June 3, I saw fully fledged juveniles. THey had a shrill squeak, which they uttered frequently, especially when the oarent bird was approaching to feed them. Four specimens of the Allen's Hummer were secured...The party consisted of Joseph Grinnell, who had immediate charge of the expedition, and gave special attention to the ornithology and entomology of the islands; Horace Gaylord, who collected mammals; and Harry Gaylord and James Brittan [Britton] who devoted their time to archaeology. The party left San Pedro harbor May 11 in a large fishing schooner... [returning June 9, 1897]”
Grinnell, Joseph Report on the Birds recorded during a visit to the Islands of Santa Barbara, San Nicolas and San Clemente, in the Spring of 1897 Pasadena Academy of Sciences Publication No. 1, August, 1897 (26 pages).

1907 San Clemente Island: “Selasphorus alleni. Allen Hummingbird. Fairly common in suitable localities. April 1, I found a nest containing two fresh eggs; April 7, another containing one fresh egg, and two unfinished nests. As I left the Island April 7, I only preserved the complete set and nest of April 1. These nests were composed of wool and spiderwebs, partially covered with lichens and placed on low-hanging twigs of holly and cherry bushes in the canyons. ” [“Visits were made to Clemente in January, February, March, April and October, 1907.”]
Linton, C. B. Notes from San Clemente Island The Condor 10:82-86, March 1908

1905-1906 Santa Catalina Island: “Sehphorus alleni. Allen Hummingbird. An abundant resident at the time of both my visits: the breeding season was well advanced, many nests being found which contained large young. The nests were nearly always built in oaks or cottonwoods in narrow canyons where there was water. Only once did I find this rule violated, in this instance the bird building its nest in a sumac which grew in a sandy wash. The basis of the nest was, with a few exceptions, sheeps’ wool. This was Mar., 1908 SPRING NOTES FROM SANTA CATALINA ISLAND 67 fastened to the twig by the aid of spider-web, the same substance being used to adhere green moss to the outside. Occasionally vegetable down was used in the lining. The dimensions of two nests are as follows:

The males resorted to the wild tobacco bushes (Nicotiana glauca) which grew abundantly in the washes. They were very pugnacious little fellows, constantly fighting and chasing one another about. ” [“These notes are the result of two brief sojourns on Santa Catalina Island in the month of April, eight days being spent in 1905, and five in 1906. Fortunately both trips were made after wet seasons; the hills were carpeted with grass, flowers and insects were abundant.”]
Richardson, Charles H., Jr. Spring Notes from Santa Catalina Island The Condor 10(2):65-68, March 1908

1898 Santa Cruz Island: “...Some groves of eucalyptus trees planted further up the valley were the dwelling place of quite a number of birds common to the mainland, such as Allen's Hummingbird (Selasphorus alleni), Anna's Hummingbird (Calypte anna), Lawrence's Goldfinch (Spinus lawrenci), Arkansas Goldfinch (Spinus psaltria), Western Chipping Sparrow (Spizella socialis arizonae), Western Flycatcher [which has been separated into a new species by Oberholser in the Auk, Vol. XIV, No. 3, July, 1897, and designated as Empidonax insulicola. This has not yet been allowed by the A. 0. U. Committee. It was commonly heard on the island, but during my stay was very shy and seldom seen]... Following is a list of birds observed during my stay:- Allen's Hummingbird (Selasphorus alleni)... ”
Mailliard, Jos., Spring Notes on the Birds of Santa Cruz Island, Cal., April,1898 The Condor 1(1):41-45, April 1899

1907 Santa Cruz Island: “Selasphorus alleni. Allen Hummingbird. Several seen. An adult male was secured November 24.” [“At 11:30 p.m., November 19, 1907, my father (H. Linton), Mr. George Willett, and myself left San Pedro harbor in a dilapidated fishing smack and in company with a crawfisherman, one “Cold-foot” Jorgensen. We arrived off the south end of Santa Cruz Island at 10:30 the following day during a stiff norwester. For various reasons we were unable to make camp until the 22nd. It may not be amiss to state here that twice during the blow we were nearly wrecked: once while at anchor in Potatoe Harbor, a broken anchor allowing the boat to drift within the breaker line and nearly onto the rocks. In this instance the timely arrival of Willett and H. Linton in a small boat, saved the day, and incidentally the fishing smack. At another time (the engine having broken down) we were blown nearly onto the rocks of Anacapa Island; but with father at the wheel and Willett and I on the “sheet” we managed to hold her off. I mention the foregoing, and the many sleepless nights spent on the rocky shores, “running” the surf several times each day (with attendant duckings), etc., merely as a warning to those who seem inclined to believe a field naturalist’s life “strewn with roses”. (Its ’ generally strewn with cacti!)”]
Linton, C. B. Notes from Santa Cruz Island] The Condor 10(3):124-129, May 1908

1927 Santa Rosa Island: “Selasphorus alleni. Allen Hummingbird. Carriger and DeGroot found many nests of this species, containing both eggs and young birds. It was numerous along the water courses lined with willows.” [“Through the generosity of Mr. Silsby M. Spalding who placed at our disposal his splendid cruiser Padariva I the writer accompanied by H. W. Carriger, Dudley DeGroot and 0. W. Howard was enabled to spend the period from March 25 to April 5, 1927, inclusive, among the Channel Islands off the coast of southern California.”]
Pemberton, J. R. Additions to the known avifauna of the Santa Barbara Islands The Condor 30(2):144-148, March-April 1928