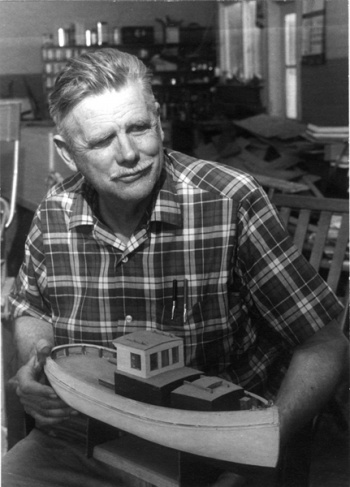 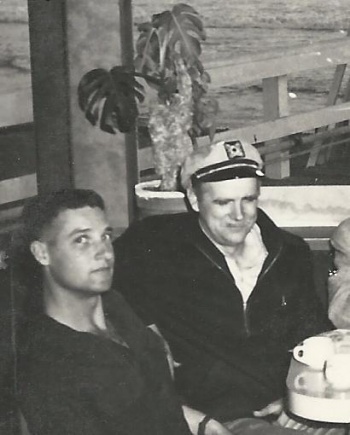 Don Mills with Merrill Allyn, who introduced Don to the wonders of the islands, 1956. 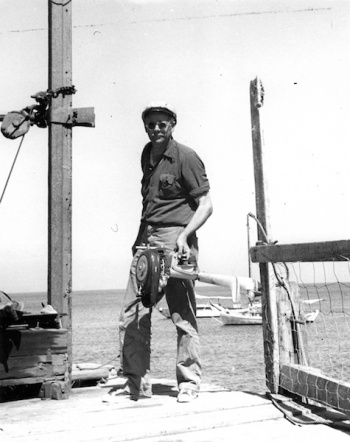 ALLYN, Merrill Carr (1904-1967) [SS#568-44-7142] was known as “Ventura's First Citizen of the Sea.” He was born in Los Angeles, his parents’ only child. He grew up on his parents ranch near Ojai, California. Allyn never married, and was reported to be a shy, retiring person. As a result of a childhood accident, his right eye was crossed, although it never seemed to bother him. Allyn was one of four partners (along with Al Derby and a Mr. Philbrick) who explored the possibility of developing a sport-fishing camp on Anacapa Island while it was leased to C. Fay Chaffe from 1932-1937. Allyn wrote several unpublished Channel Islands manuscripts, including Three Old Kings of Anacapa Island.

According to Merrill Allyn: “In the ten years between 1925 and 1935 a determined effort was made to establish sport-fishing here [Ventura]. It is a matter of common knowledge that nearly every boat brought here was on the beach sooner or later, some being totally destroyed. Party boats over 35 feet in length which broke loose from moorings included the Van-Tuna, Freda, Corliss, Billy Boy, Traveler No. 2, and Vagabond. Anchored fishing vessels lost included the Mary B, Happy Joe and Mam-A-Kiri, Ventura Sea Scouts had 4 losses during this 10-year period. Associated Oil's 45-foot line tender Lino was on the beach 3 times. Finally a total [loss]. 21 privately owned pleasure boats are known to have been overwhelmed at their moorings or beached during this period. Partial destruction of the pier in 1937 tremporarily halted efforts to use boats here. No skiffs or tenders included in above losses. Information on losses in in 1925-35 period comes from personal observation and is correct.”

June 13, 1934 [VSFP]: “H. Bay Webster, pioneer resident of this section, Saturday and what he had done exactly 50 years before, made a boat trip to Anacapa Island. Only the trip 50 years ago was his first, and he had made many since that time; the first trip was made in a small sailboat, while Saturday’s was aboard the motor launch, Hustler; and the last trip was made in the company of his granddaughter, Jane Webster. By way of commemorating the day, Webster and his granddaughter went over on Captain M. C. Allyn’s vessel, camped out overnight, and returned aboard the Hustler Sunday night.”