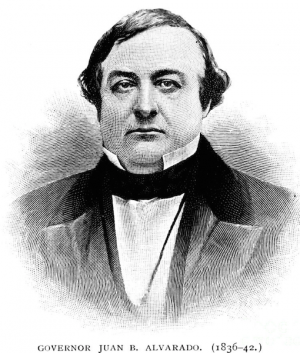 ALVARADO, Juan Bautista (1809-1882), native-born Californian and 12th Mexican governor of California who served from 1836 to 1842. During his term of leadership, he granted Santa Cruz Island to Mexican citizen Andres Castillero in 1839. Governor Alvarado granted title of the island to the water’s edge. Fifteen years later, in 1854, Alvarado testified before the U.S. Land Commission on behalf of Andres Castillero’s attorney in fact, José Antonio Aguirre. Alvarado swore that Castillero told him Aguirre was to have one half of Santa Cruz Island for taking care of it. Despite Alvarado’s testimony however, Aguirre’s claim was not recognized, and Andres Castillero’s grant was upheld.

Alvarado retired from public life following the American takeover of California during the Mexican American War.

February 5, 1874 [LAH]: “The Santa Cruz Island Company was organized in 1869, having been incorporated under State authority, with half a million dollars’ capital, for carrying on the business of sheep-husbandry, stock-raising, etc. The island of Santa Cruz, one of the Santa Barbara group, was purchased by the company as a field of operations. This island, which has a superficial area of 52,700 acres, as per patent, was originally granted to a Spaniard, Andres Castillero, by Alvarado, Governor of California, May 22, 1839, and the grant was subsequently confirmed by the Board of United States Land Commissioners, and by the District Court of the Southern District of California; the patent bearing the date of March 21, 1867. In 1857 it was bought from Castillero by an American, William E. Barron, by whom it was held as a private property, used for sheep-raising, until it was bought by the Santa Cruz Island Company. The officers of the company are all naturalized citizens, including two Germans, two Spaniards, and one Frenchman. The buildings and improvements of all sorts located on five different points of the island, are valued at $20,000 to $40,000, exclusive of steam tallow works erected two years ago at the expense of about $6,000. The wharf at Prisoners Harbor, recently restored, has cost the company no less than $10,000. The fences all over the island represent a prime cost, since the purchase by the present owners, of $6,000. The schooner and surf boats have cost not less than $6,000; and the stock of the wagons, saddles, agricultural implements, etc. may be valued at about $2,500. There are now running at liberty over the island, flocks of Spanish Merino sheep, numbering between 40,000 and 45,000 head, worth, according to the season of the year — that is to say, with or without wool on — from $2 to $3.50 each, and representing an aggregate value of $150,000. Besides these immense flocks there is a stud of about 125 saddle and draft horses and mules, some breeding mares with colts, and a fine stallion of the Morgan stock, representing a value of $10,000 to $12,000; about thirty head of fine tame Devon cattle, including bull, milk cows and their increase for the use of the island, valued altogether at about $1,200 or $1,500; and finally, perhaps, 150 head of cattle running wild in the valleys and over the mountains, and affording, whenever desired, an extra supply of fresh beef for the use of the permanent residents on the island. How this splendid property will ‘pan out’ in the future, in the shape of dividends to the stockholders (and I’m not one of them, so this may be accepted as an unboased account,) may best be judged after an examination of the results of the past year’s operations. The cash receipts and earnings of the company, from the sales of livestock — sheep, sheep-skins, wool — and from sundry other sources, reached $76,000, and the net profits, after paying all expenses, amounted to $48,000, leaving the company with no outstanding debts or obligations whatever. A splendid result, that carries its own lesson with it. After all, it is not the true ‘golden fleece’ to be found on the back of the patient sheep?”