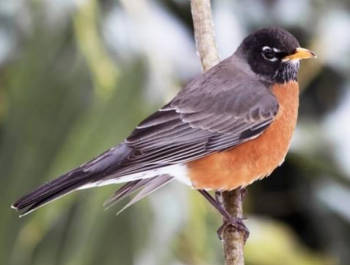 1927 Santa Barbara Island: “Turdus migratorius propinquus. Western Robin. Several were seen by [O.W.] Howard.” [“Through the generosity of Mr. Silsby M. Spalding who placed at our disposal his splendid cruiser Padariva I the writer accompanied by H. W. Carriger, Dudley DeGroot and 0. W. Howard was enabled to spend the period from March 25 to April 5, 1927, inclusive, among the Channel Islands off the coast of southern California.”]
Pemberton, J. R. Additions to the known avifauna of the Santa Barbara Islands The Condor 30(2):144-148, March-April 1928

1927 Santa Rosa Island: “Turdus migratorius propinquus. Western Robin. [Dudley] DeGroot saw on April 4 a flock of about twenty on the higher ground of the western side of Belcher's [sic] Bay.”
Pemberton, J. R. Additions to the known avifauna of the Santa Barbara Islands The Condor 30(2):144-148, March-April 1928

July 1923: “Planesticus migratorius propinquis (Ridgway). Western Robin. The Western Robin has already been recorded from Santa Catalina by Harry Harris (Condor, XXI, 1919, p. 172). In view of the scarcity of records for this island, it is perhaps pardonable to record an additional adult female, taken at White's Landing, January 24, 1920. On Santa Cruz Island, a flock of about 10 birds, from which a female was collected, was found in the oaks near the main ranch, back of Prisoner's [sic] Harbor, March 30, 1920. Mr. Fred Caire, the owner of the island, as well as several residents, stated that robins were present by hundreds during the early winter of that year.”