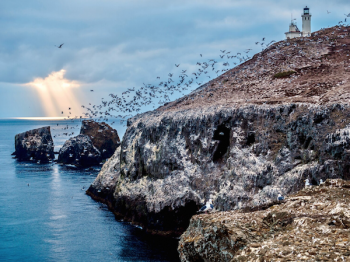 In 1938, Anacapa Island became a part of Channel Islands National Monument, encompassing both Anacapa and Santa Barbara islands. This status was created under President Franklin Roosevelt’s Antiquities Act of 1938.

June 5, 1898 [SFCall]: “Ventura, June 4. There has been filed with the County Recorder a deed whereby, in consideration of $8000, Ezekiel Elliott of Santa Barbara conveys to George Le Mesnager of Los Angeles all his right, title and interest in Anacapa Island, and a deed whereby J. V. Elliott of Santa Barbara conveys, in consideration of $8000, to Peter Cazes of Los Angeles all of his title and interest in San Nicolas Island. Both islands are off the coast of Ventura County, and are a part of this county. Anacapa lies about twenty nearly [something missing] 1000 acres of land, capable of supporting 1500 sheep or goats. San Nicolas is due south, eighty miles from Ventura, and contains about forty square miles, capable of carrying 3000 sheep.”

November 16, 1901 [SFCall]: “Sealed proposals in duplicate will be received at the office of the Lighthouse Engineer, San Francisco, Cal., until 12 o’clock m., December 13, 1901, and then opened, for the rental of Anacapa Island, Ventura County, Cal. (reserved by Presidential order as a lighthouse reservation), for a period of five years. Information and blank forms of proposals furnished on application to Lieutenant Colonel Chas. E. L. B. Davis, Corps of Engineers, U.S.A. Lighthouse Engineer.”

February 1, 1907 [LAT]: “Major C. H. McKinstry, Corps of Engineers, U.S.A., engineer of the Twelfth Lighthouse District, whose office is No. 1392 Golden Gate Avenue, San Francisco, has issued an official announcement that sealed proposals will be received by him until 11 o’clock A.M. on February 19, for leasing the Anacapa Island Lighthouse Reservation for a period of five years, commencing April 1. All necessary forms and information may be secured by applying to Major McKinstry.”

June 14, 1911 [SBMP]: “John Sheridan is supposed to be doing a lonesome turn on Anacapa Island these days, but the latest wireless dispatch from that station is to the effect that he is chasing the eagles from Bay Webster’s patch of lambs, and when not busy at that, has a commission to herd abalones, which are swarming at this season of the year. John was a member of Captain Webster’s party Saturday, but failed to get down to the landing in time for the trip home Sunday evening. He will doubtless be ready for the return trip on the next visit Captain Webster makes to his wave-washed domain.”

February 28, 1912 [SBMP]: “Would you rent an island? Here is your opportunity. Anacapa, four miles long, will be let to the highest bidder by Inspector Moffett. Bids for the leasing of the island will be opened at Lieutenant Moffett’s office in the Customs House in San Francisco. This, and more detailed information on the same subject, appears in a four-page notice posted at the Santa Barbara Post Office. Anacapa Island is described in the notice as consisting of three rocky islands, but the eastern island is not to be leased. That is reserved for lighthouse purposes. According to the same notice, the middle island is about two miles long, and 500 yards in greatest width, with the greatest altitude of 320 feet. The western island is about two miles long and three quarters of a mile wide, and reaches a height of 980 feet. It is admitted that there is but a small quantity of water available on the island, and that the soil is loose and thin. Nevertheless, in former days quite large bands of sheep were maintained on the island. Throughout the year, the morning dew in the summer taking the place of water in quenching the thirst of the sheep, and pools of water standing during the winter, from the rains, serving the same purpose at that time of year. Captain H. Bay Webster of Ventura has been the government’s tenant for the past five years, paying, if memory serves correctly, $25 per year for the island. The new lease will date from April 1, 1912.”

March 20, 1917 [SBMP]: “Captain Ira K. Eaton has just been awarded by the Federal Government the lease of Anacapa Island for a term of five years beginning April 1. The last two terms, aggregating ten years, the island has been leased to Captain Bay Webster of Ventura, and he was one of the bidders for the ensuing term, but Captain Eaton's bid was higher than that of the Ventura man, and he took the prize. Captain Eaton will use the island primarily for fishing camps — the waters roundabout constituting famously good fishing grounds, better at certain seasons, than in any of the other island waters — and he will also utilize the small sheep range on the island, expecting to have a flock of about 500 of the profitable wool bearers. There are at present about 400 sheep on the range belonging to Captain Webster, and these may be bought by the new lessee, or they may not.”

July 2, 1917 [LAT]: “Island’s new king to land on domain today. Early this morning, if the breeze is fair, Captain Ira Eaton will shake the reefs out of his sea legs, cast off short lines from the staunch little Sea Wolf, and sail from Santa Barbara to become the uncrowned king of Anacapa Island. Amid the caves and crags of his domain, where pirates of old skulked between forays on the track of rich galleons booming along from Manila to Panama, the new sovereign will be supreme for the next five years, and all for the sum of $607, United States gold. Simultaneously, Captain H. B. Webster, who for ten years has been lord of Anacapa, will today get the last units of a herd of some 500 sheep loaded on a barge, and with 1400 pounds of wool as treasure trove, will depart for the mainland, to become an ordinary citizen once more… Captain Webster got Anacapa in 1907 for $26 a year, and in 1912 he secured the lease for $77 a year. This time, Captain Eaton overbid the former sovereign of Anacapa, and will assume possession today, wind and tide allowing…”

In 1932, the Bureau of Lighthouses brought Anacapa and Santa Barbara islands to the attention of the National Park Service. By 1935, Congress had created a statute dealing with unused Government property, under which Anacapa Island was placed. In 1937, the Commissioner of Lighthouses advised against any further lease agreements on Anacapa Island, and hence leasing was terminated. In 1938 Anacapa Island received National Park Service protection under the Antiquities Act as Channel Islands National Monument. In 1980 it became a part of Channel Islands National Park.