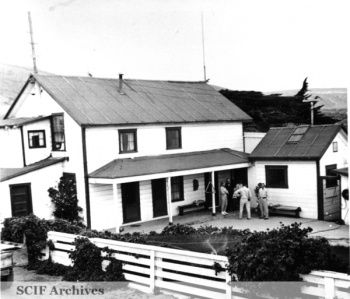 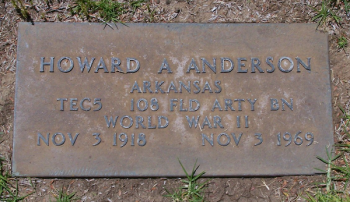 Anderson was born in Arkansas, and had served in World War II. He had worked for Vail & Vickers for about six and a half years at the time of his death at age 51. Santa Barbara Country Sheriff, E. K. Smith, had gotten Anderson the job on the island. Smith knew Anderson because he had been a cook at the county jail. After the fire, Smith, acting as assistant coroner, was taken to the island by the Coast Guard to recover the body. Anderson’s dog also died in the fire. Anderson is buried in the Goleta Cemetery.

Bill Wallace on the Bunkhouse Fire::

“It happened on November 3rd, 1969. We had a cook here, Howard. Long about 10 o'clock at night a cowboy, Miguel, came up and said there was a fire down there — at the bunk house. So I went down there. Howard had gotten drunk and went to sleep with a cigarette in the bed. He was sleeping upstairs in the bunk house. We took his mattress and threw it out and attempted to put all the fire out. Old Howard, he was out of it. He had a bottle of whiskey, and so I took it and his his whiskey. Everything was out, so I came back here and went to sleep. Long about 2 o'clock in the morning, Miguel come back up and, my God, it was an inferno down there. Evidently he [Howard] set the bunk house on fire or what... I don't know... but boy it was an inferno. He died in the fire. The fire burned the whole bunkhouse down. I was scared to death it was going to catch the barns on fire, but it didn't. We started building the new bunkhouse almost right away.”

November 5, 1969 [SBNP]: “Funeral services for Howard Albert Anderson, 51, who dies Monday in a fire on the Vail Ranch on Santa Rosa Island, will be tomorrow… Mr. Anderson worked as a cook on the Vail Ranch and had been employes there for the past 6-1/2 years. The circumstances of the fire are still being investigated by authorities. He was born in Paris, Arkansas November 3, 1918. A veteran of World War II, Mr. Anderson served in the U.S. Army. Surviving are a son, Howard A. Anderson III of Paradise Camp; a daughter, Mrs. Gwennie Lee Hawkins of Redding; his father, Howard D. Anderson of Arkansas; two sisters, Mrs. Betty L. Perez of Santa Barbara and Mrs. Vivian Milliron of Bieber, and two grandchildren…”