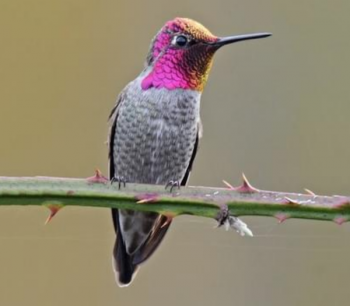 1898 Santa Cruz Island: “...Some groves of eucalyptus trees planted further up the valley were the dwelling place of quite a number of birds common to the mainland, such as Allen's Hummingbird (Selasphorus alleni), Anna's Hummingbird (Calypte anna), Lawrence's Goldfinch (Spinus lawrenci), Arkansas Goldfinch (Spinus palstria), Western Chipping Sparrow (Spizella socialis arizonae), Western Flycatcher [which has been separated into a new species by Oberholser in the Auk, Vol. XIV, No. 3, July, 1897, and designated as Empidonax insulicola. This has not yet been allowed by the A. 0. U. Committee. It was commonly heard on the island, but during my stay was very shy and seldom seen]...”
Mailliard, Jos., Spring Notes on the Birds of Santa Cruz Island, Cal., April,1898 The Condor 1(1):41-45, April 1899