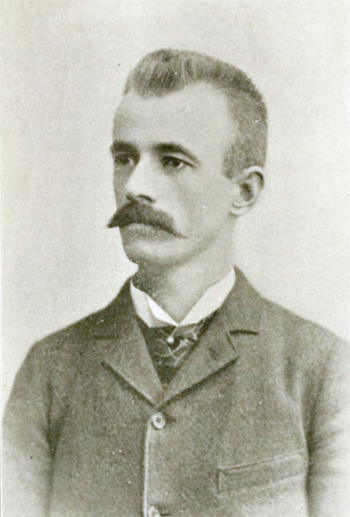 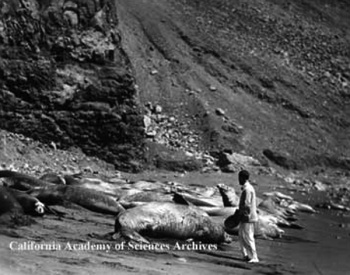 ANTHONY, Alfred Webster (1865-1939) was born in Cayuga County, New York on Christmas day, 1865. He became a field naturalist and mining engineer by profession, and in 1886 he moved to San Diego, where he became one of the early directors of the San Diego Museum of Natural History. Anthony worked extensively in southern California and Lower California, collecting mammals, birds, reptiles, invertebrates, plants and minerals. He developed a particular interest in the islands off the coast of Lower California and purchased the schooner H. C. Wahlberg in order to facilitate his collecting trips.

His private collection of over 10,000 birds was sold to the Carnegie Museum [CM], Pittsburgh, Pennsylvania. Several birds, including Anthony’s Green Heron (Butorides virescens anthonyi), and several mammals are named in his honor.

Anthony visited San Clemente Island August 22-29, 1894 with E. A. Mearns as a part of the International Boundary Commission. They accessed the island via the U.S. revenue cutter, Wolcott.

Anthony visited Isla Guadalupe several times. In 1897 he was accompanied by H. B. Kaeding and Walther Frederick Henninger.

Anthony became a member of the Cooper Ornithological Club in 1921. Anthony died May 14, 1939 in San Diego, CA.

Anthony's collections are found in:

ANTHONY, Alfred Webster “Born in Cayuga County, New York, December 25, 1865. An active field ornithologist, well known from his work in southern California on on the peninsula of Lower California. His collections is now in the Carnegie Museum in Pittsburgh, Pennsylvania. He has described a number of new birds and his name appears in those of Heron (Butorides v. anthonyi Mearns), a shrike (Lanius l. anthonyi Mearns), and Anthony's Vireo (Vireo huttoni obscurus). This last species is now registered as untenable (see Grinnell, Condor XXIV, 1922, p. 32).”

August 30, 1894 [letter/ANS]: “Mr. Witmer Stone. Dear Sir, I returned last night from a trip to San Clemente Island 70 miles west of here. I had Dr. E. A. Mearns with me and of course had a good time. We got all, I think, of the land birds of the island, among them a series of Melospiza fusciata clementae Towns. I can send you a few of them if you wish. They are hard to get and I doubt their being taken from the type locality again soon… Yours

October 5, 1896 [LAT]: “A. W. Anthony of San Diego, who has just returned from the coast of Lower California, where he has been gathering specimens of the flora and fauna for the Smithsonian Institution, brought back with him nine deer of an entirely new species. These deer are of a much smaller size than the ordinary deer of the Lower Peninsula. Anthony’s capture is regarded as of importance from a scientific standpoint.”

January 27, 1897 [LAT/SD]: “A. W. Anthony has purchased the schooner Wahlberg. He will take a six-month’s cruise along the coast of Lower California as naturalist for the Smithsonian Institute.”

February 15, 1897 [LAT/SD]: “Professor A. W. Anthony will sail today or tomorrow in the schooner Wahlberg for Lower California on a cruise until next August, collecting specimens of birds and mammals for the Smithsonian Institution.”

February 20, 1897 [LAT/SD]: “The schooner Wahlberg has sailed for the Lower Califoria coast, carrying a scientific expedition in charge of A. W. Anthony, the naturalist, who seeks specimens of birds and animals for the Smithsonian Institution. Professor T. S. Brandegee, one of the authorities on coast flora, is with the party; also R. C. McGregor of Stanford, E. A. Salisbury of Los Angeles, Col. Scott J. Anthony of Denver. The schooner will visit the Socorro and Clarion group of islands, 300 miles from Cape St. Lucas, and possibly Tiburon Island in the Gulf of California. The trip will last from six to eight months.”

July 28, 1897 [SFCall]: “Found Starving on a Lonely Isle. Four men picked up by the San Diego vessel Wahlberg. Two of them presidio soldiers who had been missing for months. Valuable specimens brought back by the scientists who sailed on the schooner. San Diego, Cal., July 27.—The schooner Wahlberg, which sailed from this port on March 3 on a scientific expedition for the Smithsonian Institution and Stanford University, arrived at noon today. The crew consisted of Captain Fred Anthony, a well-known scientist; H. Keating; D. H. McGregor, a Stanford student, of Stockton; W. E. Goolman of Pacific Beach; and a Stanford University professor, who was left at San Jose del Cabo on the way down as he could not endure the hardships of the voyage. The professor took the first steamer going north for San Francisco. The Wahlberg brings back a full cargo, consisting of five tons of rare and curious deep-sea shells and four barrels of deep-sea fish, especially packed by McGregor for President Jordan. They are beautiful specimens, and were preserved by McGregor of Stanford. They were selected from Todos Santos, St. Martin, Geronimo, Guadaloupe, Bonitos, Natividad, Turtle Bay, San Rooks [Roque], Ascencion, Abricos Point, Cape San Lucas, San Jose del Cabo, Benedict, Socorro and Clarion islands, the latter islands being over 1000 miles from the coast. Many of the fish specimens are very rare, and one or two new varieties, not classified at Stanford or Berkeley, were obtained. On her return up the coast the Wahlberg stopped at Natividad, where she found four San Diegans who had been left at Cedros by the junk Hongkong, and had been taken to Natividad by a schooner, with the expectation of returning on another schooner to San Diego. The men there nearly famished for the want of food, but the arrival of the Wahlberg saved their lives. They were all brought away and arrived here today. They are ex-Sergeant Sanford, Private Connors of Company H, Tenth United States infantry, and John Dampier and William Andrews, sailors. These four men left San Diego on the Hongkong about eight months ago for Cedros Island, 400 miles down the coast. Dampier and Andrews were after abalone shells and meat, and Sergeant Sanford and Connors accompanied them for pleasure solely, both men having been granted three months' furlough. Upon their arrival at Cedros the Hongkong anchored on the south side of the island, where the four men were left, and the Hongkong continued south after guano, intending to return to San Diego and then pick the men up on her next trip. When the Hongkong returned to San Diego she was sold to J. W. Kishler of Riverside, who fitted her out as a guano poacher and sent her out in a different direction. The crew forgot all about the four men awaiting them on the lonely desert island, and went on the cruise with the Hongkong. In the meantime another small schooner had taken the quartet over to Natividad, where they were left with provisions and water, expecting to be able to get aboard of a schooner bound for this port before long. But no schooner have in sight until the Wahlberg arrived in time to rescue the half-famished men. By this time the furloughs of both soldiers had expired, and the men will now have to go to the Presidio to re-enlist in the army. Sanford is the senior sergeant of the Tenth Infantry, having served in the army for twenty-six years and having but one more term to serve to entitle him to be retired. For eight months nothing had been heard of the party, and during that time the men had no tidings of the outside world. Their arrival here today was a great surprise to nearly everybody, as it was generally supposed they were long since dead, either from shipwreck or starvation.”

July 29, 1897 [SFCall]: “Great Scientific Collection. Birds, Snakes, Fish, Mammals, Plants for the Museums. San Diego, Cal., July 28.—Captain Fred Anthony's scientific expedition which returned yesterday on the schooner Wahlberg from a 2500-mile cruise down the coast, was the most successful expedition of the kind ever made to the southern coast. The collection gathered includes 2000 specimens of stuffed birds, many very rare and beautiful and unknown in coast collections; 250 varieties of plants, 100 specimens of cacti, 300 mounted fish, 200 snakes and lizards and 100 mammals. The fish will be turned over to President Jordan to be added to the already magnificent collection at Stanford. The birds belong to Captain Anthony, and many of them will be consigned to the Smithsonian Institution. The mammals will be shipped to the Dr. Allen Museum of Natural History, Central Park, New York City, and the plants will go to Professor T. S. Brandegee, now at Helene, Mont. The rarest specimens were obtained from Socorro Island, 400 miles southwest of San Jose del Cabo and 1100 miles south of this port.”

November 22, 1897 [LAH]: “The schooner Wahlberg, which failed to reach the Cortez fishing banks last week and put back to port for more provisions, sailed for the banks again yesterday.”

January 13, 1898 [SFCall]: “The Wahlberg on the Rocks. Captain and Two of Her Crew Brought to San Diego. While Gathering Curios on the Lower Coast the Schooner is Wrecked. Her Anchor Chain Parts During Heavy Swell—All Hands on Board Escape. San Diego, Jan. 12.—The schooner Anita arrived this morning from Santo Domingo, Lower California, with a cargo of gold ore and several thousand dollars in bullion. The Anita also brought up Captain Charles Hartwick, Harry Drent and Andrew Anderson of the schooner Wahlberg, which was wrecked at Lagoon Heads, 300 miles south of San Diego, on December 17. On December 8 the schooner Wahlberg left this port for the lower coast to gather curios. She called at Ensenada. At that port she took on a Mexican customs official, his destination being the Calmilli mines. Nothing unusual happened on the trip until Lagoon Heads were reached, on December 17. There the anchor was dropped and the sails furled. A heavy swell was rolling in on the beach, but Captain Hartwick saw no danger. The customs official was about to be landed in a small boat, when the anchor chain parted and the schooner was soon drifting in on the rocky coast. The crew made heroic efforts to save the vessel, but before anything could be done she struck and in a few minutes the bottom had pounded on the rocks, smashing her to pieces. They men escaped without injury, but the vessel is a total loss. The men remained on the beach until the arrival of the Anita. The Wahlberg was owned by Professor A. W. Anthony of this city. She was purchased from Captain Martin and has been used to take trips along the southern coast, gathering curios for the Smithsonian Institution. The trip previous to this one consumed five months and several tons of fish were secured by a Stanford student who took passage in the vessel. A letter was received yesterday by Harry Robbins from Professor Anthony, the owner of the vessel, who is at Portland, stating that he had a charter for the vessel as soon as she returned. The loss will fall very heavily on Professor Anthony, who had just had the schooner overhauled and many improvements made to her. The Wahlberg was valued at $2500 and was made famous through her Hawaiian exploits under a former owner.”

March 24, 1898 [LAT/SD]: “Charles Hartwick, late master of the schooner Wahlberg, which was wrecked down the coast several months ago, was arrested yesterday, charged with grand larceny. The owner of the schooner, A. W. Anthony, alleges that Hartwick reported the vessel and furniture a total loss, when in reality the skipper had saved a compass and marine glasses of considerable value…”

July 7, 1922: “Scientists to VIsit Guadalupe Island. Arrangements have been completed, it was said yesterday, for the scientific expedition to Guadalupe islands, which will start Sunday. The purpose of the trip was announced recently in The Union. The scientists will make the trip in to the islands on the Mexican gunboat Tecate, which has been loaned by the Mexican government. The party will be under the direction of Carlos Chesta Terron, biologist of the department of fisheries of the Mexican government, and A. W. Anthony, director of the San Diego Museum of Natural History.”