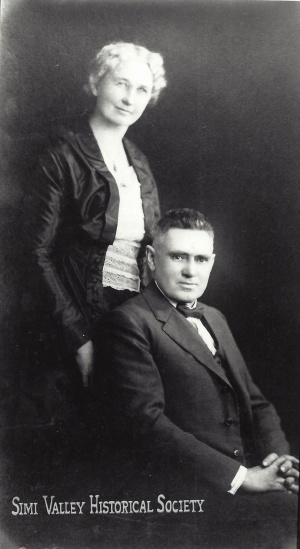 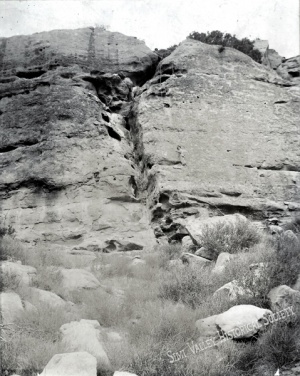 Looking for Turkey Buzzard eggs in the Santa Susana Pass near Chatsworth. Look closely ~ Sparhawk is half way up the rock face on the right.

Appleton was an oologist who collected eggs on four California Channel Islands:

Eggs sets collected by Appleton are housed in at least seven institutions:

June 6, 1906: “Prince Island. California Murre. Eggs laid on bare rock just above breakers. Lots of broken eggs where they were laid too near water and got broke by waves. Two or three colonies of from 5 to 50 pair each nesting on island. All the eggs collected were fresh. Tufted puffin. Eggs laid in burrows on top of island. Burrows 2 to 3 feet long.” [J. S. Appleton. Unpublished field notes, Western Foundation of Vertebrate Zoology].

June 8, 1906 [SBMP]: “The power yacht Vishnu, Captain Merry, came into port yesterday noon having as passengers Professor Appleton of Chicago, and his two assistants, Homer C. Burt and H. S. Hedrick. These members are members of the Audubon Society and are enthusiastic ornithologists. On Prince Island, near San Miguel Island, they found a vast and prolific field for scientific investigation. The island was literally covered by hundreds of thousands of water fowl of many varieties, some of them very rare, and their eggs are very valuable to collectors. The weather at San Miguel Island was very fine, and contributed largely to the enjoyment of the party.”

June 10, 1910 [SBWP]: “Islands scoured by scientific men. The little power launch Niedra, Captain Ed Hall, home port San Pedro, came in late yesterday afternoon from San Miguel Island for gasoline and water, and also to meet Captain Hall's wife and other members of his family who are expected to join him here for his return trip to San Pedro by way of San Nicolas. Incidentally, Captain Hall referred to a smashed foot which injury he received while attempting to make a landing, during a squall, on San Miguel. The Niedra is on a scientific expedition. At least, she is the transportation for two scientific expeditions which are engaged in the compilation of notes of the channel Islands and in the collection of curios and specimens. At San Miguel Island, the Niedra left Messrs. Willets [Willett] of Los Angeles and Appleton of Simi, Ventura county, and others, a party of taxidermists and bird men, who will probably spend two or three weeks on the island, with headquarters at Kiler's (Cuyler's). At San Nicolas, he will stop for Mr. and Mrs. Clarence Linton and party, who have been tenb weeks on the dreary isle in the interests of a new institution in Los Angeles, gathering curios.”