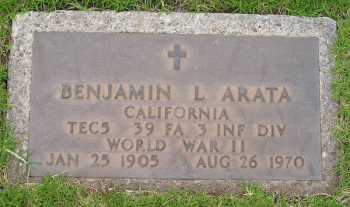 ARATA, Benjamin “Benny” Luther (1905-1970) [SS#563-14-7679], whose grandfather came to Santa Barbara from Genoa, Italy, was a second-generation Santa Barbara native and an Army World War II veteran. Twice married and divorced, Arata suffered from alcoholism. Judge Pier Gherini, Santa Barbara police judge from 1946 through 1951, often sentenced troubled alcoholics to work on the east end of Santa Cruz Island. This not only provided the Gherinis with employees, but also it helped alcoholics in sobering up. Arata was one of them.

According to Suzie Arata, Benny's sister-in-law who was interviewed in 1998 at age 89:

“Benny lived at Scorpion Ranch with his little dog, Chico, and he was very fond of horses. He helped to tend the sheep and perform whatever work was necessary on the island. He came and went to the island several times, putting in his time. Benny would always return to town and drink again.”

Arata also worked off and on for 40 years at the Santa Barbara Riding Academy. In August of 1970, Arata died in Santa Barbara at age 65.

“Little has previously been written about injuries the island workers sustained in performing the myriad ranch tasks, and the radio logs provide insight into the dangers confronting the workers and show a consistent pattern of injury. There were no emergency centers on the island and every injury involved transportation issues which at times could be complicated by the weather. The logs revealed in September 1954, “Benny hurt hand,” “Benny wants to come in.” The boat came the next day “to pick up Benny.” Pier Gherini then “advised Joe, Benny at hospital-operated on hand.” While working on a fence line, Benny brushed his right hand against some cactus which became imbedded and seriously infected. Benny was hospitalized at Saint Francis Hospital in Santa Barbara where surgery was performed.” (Argonaut Reports)

“Like all previous wharfs, however, this one was likewise susceptible to damage from wind and surf, and on 19 December 1956 the log notes, “heavy Santana winds damaged wharf.” The constant battering of the wharf by the winter storms left the structure weakened and it collapsed in January 1959, with the radio journal notations relating the story. At the time 46 large burlap wool sacks and 6 smaller sacks awaited shipment to the mainland. The wool sacks weighed between 300–400 pounds and were six feet in length. Gherini told Benny on January 23rd to haul the wool to the wharf so that the sacks could be loaded onto the boat Sunday. Two days later the foreman advised Gherini that the “dock broke—30 sacks slipped into the water.” The workers were only able to salvage two sacks, and on January 25th, Benny received word that “divers over 0800 tomorrow to look for sacks.” The workers then built racks “to dry wool.” On January 26th, the foreman reported that five sacks of wool were recovered” and the Hodge arrived at Scorpion. The Hodge could haul approximately 300–400 sheep, depending on their size and could carry 50–60 sacks of wool (Gherini 1997). The entry of January 27th explains that the workers and divers “recovered 5 more sacks-total 10-others can’t be found, divers left for SB about noon.” The workers then opened up the recovered sacks, dried the wool for about a week and then resacked it. The shipment of wool awaited another day which occurred on February 24th when the workers loaded the sacks onto the Hodge which brought them to Santa Barbara.” [Gherini, John Radio Santa Cruz: A Glimpse of Island Ranch Life from 1951 to 1984 (2005)]