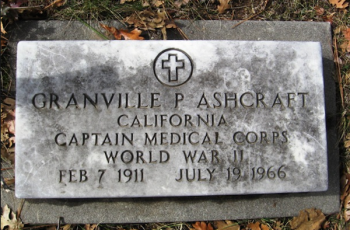 ASHCRAFT, Granville “Bud” Plummer (1911-1966) [SS#547-18-1523], Missouri-born naturalist, member of the Cooper Ornithological Club and physician who served as a captain in the medical corps during World War II. Prior to the war, Ashcraft collected specimens (birds and lizards) on at least seven of the eight California Channel Islands. His specimens are at the Los Angeles County Museum. In 1938 he was with Loye Miller on San Miguel Island. He was also associated with the Hancock Foundation.

Ashcraft married Marie Louise Fulkerson and they had five children: Robert, Edward, Thomas, Theresa and Margaret. While living in the small rural town of Etna, California, Ashcraft pioneered the use of a helicopter for medical missions.

Ashcraft died in Yreka, California on July 19, 1966 at age 55 and is buried in Etna Cemetery, Siskiyou County, California.