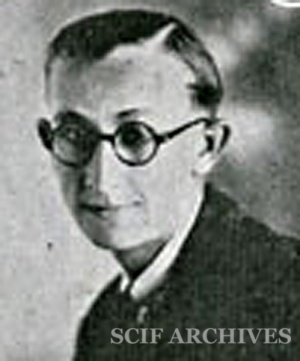 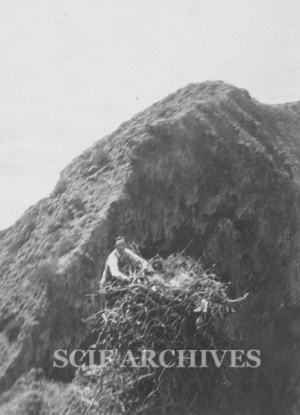 ASHWORTH, Charles William (1909-1974)[SS#477-10-6619] was an amateur ornithologist and avocational egg collector, active on the Channel Islands between 1927 and 1931. He was born to Louis Earl Ashworth (1884-1916) and Lena Starletta Scoles (1888-c. 1917) who had married in Fayette, Iowa on June 6, 1906. His father Louis, a barber, died when he was young, and his mother, Lena, remarried. Lena was murdered by her second husband, leaving Charles an orphan at age eight. Lena’s father, the child’s maternal grandfather, Charles S. Scoles, became his legal guardian. Grandfather and grandson moved to Laurel Street in Ventura to live with Ashworth’s maternal aunt, Leona Jenks. When Scoles died in 1929, Jenks became his legal guardian. While in high school, Ashworth won both the Ventura County and Southern California typing contests. He was graduated from Ventura High School in 1926, and got a local job as a stenographer for Shell Oil Company.

Ashworth began his egg collecting as a teenager, and always went to the islands in the company of his friend, Richard E. “Dick” Thompson, three years his junior. The boys actively collected eggs for about five years. Between 1928-1931, Ashworth published half-a-dozen notes in The Oologist, with information about California Owls, Condors, Bushtits, Snowy Plovers, Western Mourning Doves, and other birds. In his first article, written when he was 19, Ashworth notes:

“Dick and I have only been collecting a few years, and subscribers to The Oologist for about six months, but we get such pleasure from the articles contained in our magazine, that I thought I would record the interesting incidents noted during the past season. I hope it will be of interest to some of the boys [The Oologist 45(11):153 November 1928].

Additional sets of Bald Eagle eggs Ashworth is known to have collected have yet to be located.

In the 1930s, Ashworth moved to St. Paul, Minnesota, where he worked for Northland Ski Company. Ashworth died of colon cancer at age 65, and was survived by his wife, Lucille, and sons James C. and Thomas.

Ashworth’s egg collection is located at the Western Foundation of Vertebrate Zoology.