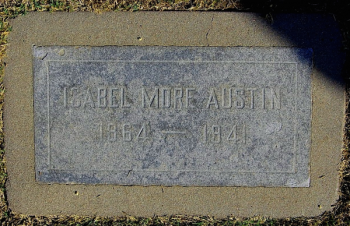 AUSTIN, Isabel “Belle” More (1864-1941), born in Copley, Ohio on December 9, 1864. She was the daughter of John J. More and Miriam Hickox More who were among the early pioneers to move to Santa Barbara from Ohio. Belle was educated in high school in Santa Barbara and attended Mills College in Oakland. As a child, she spent considerable time at both their Goleta ranch, More’s Landing, as well as on Santa Rosa Island, owned by More family members. Belle married artist and illustrator, Charles Percy Austin. They had three sons:

Their home was at 131 East Arrellaga Street.

Belle Austin was an artist and author who wrote various fictionalized articles about the Channel Islands that were serialized and published in the Los Angeles Times. She died in Santa Barbara on July 9, 1941.

October 2, 1898 [LAT]: “Isabel M. Austin. A dry and thirsty land. Story of a Matanza on Anacapa Island… A matanza. That’s a Spanish word for a big cooking apparatus that extracts the fat from the meat after the sheep are skinned…”

July 20, 1905 [SBMP]: “Miss Austin of Mission Canyon, who made the trip to Santa Cruz Island last week on the Vishnu with some friends, was so well pleased with the scenery and with the delights of the voyage that she has engaged the yacht for Saturday of the present week, and a small party will make the excursion with her.”