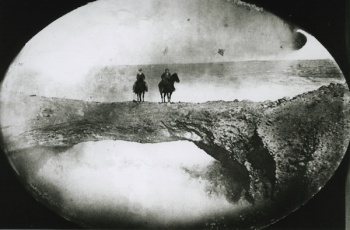 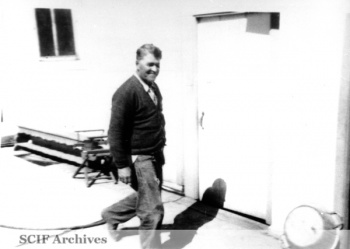 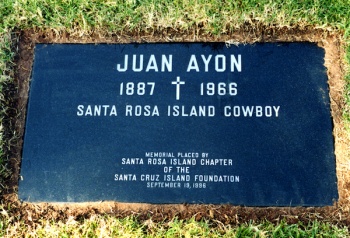 AYON, Juan [Allon, Aione, Ayone] (1887-1966) [SS#548-44-3708], legendary Santa Rosa Island cowboy who worked for Vail & Vickers for 42 years. He came to Santa Rosa Island after first working on the Vail’s Empire Ranch in Arizona. He was born in Sonora, Mexico, was unschooled, and he never married. Unable to sign his own name, he carried a name stamp and an ink pad in a pouch every time he went to the bank in town.

“Juan Ayon was about 67 to 69 years old when I met him. He was kind of a hard person. He love only Juan Ayon. He don't have love for anybody else. He have a pretty bad mouth, curses to speak. He copy lot of English he hear and know all the bad words he can think. He speak not really good English, all broken up English — same thing with the Spanish. The Spanish he spoke was pretty rough.

The only years I know him, I got him to have a bank account and also I teach him to sign his name. As a matter of fact, I wrote to some company in Mexico to have a stamp made with his name, Juan Ayon. He say make me a little pouch — so he can carry his stamp and little ink blotter. And he used it a lot. Every time he go to the bank, or every time he expect to do some signing. Every time he go to cash his check or something, he used that stamp. Also, I used to read his mail, whatever mail he get. And I was not the greatest English reader at that time — to translate his mail. But I used to make myself understand.

He was a very funny person. Like I say, he don't care about anyone, only Juan. He was a cook at that time. He was always cooking whatever he like.And he hide whatever he can from all other workers. He didn't want the other workers to steal anything that he cook. He always make abalone jerky, beef jerky and flour tortillas. He always had some hanging in the barn, or little rooms by the bunk house. He was very proud of doing these things because when we went riding horseback he always reached in one side of the saddle and grab a tortilla or a piece of jerky and always pass a piece of jerky and tortilla around. But he don't like us to get near to his horse. He don't want us to steal anything. He was a very funny guy.

He always grow a garden and grow his own corn and vegetables. He was very proud of everything he do. And he was always happy to give somebody a zucchini to take home or cook it, or doing something like that. Corn — he always grow nice corn.

He used to milk the cows in the morning and have a big fight with the cows. They were bad, always moving, kicking the milk back at him, and they have the biggest fight you can think about. Not only that, he cuss these cows in English and Spanish and Indian, you name it, he'd do it. We all used to make jokes at him.

We used to play a lot of tricks on his horses, with his clothes, tie everything together and turn off the light. He used to wash his clothes in the laundry room and he hang them on the lines. We all used to go tie the sleeves of the shirts together and make a big chain out everything. And he used to get so mad. He get mad.

He have [for his room] one of the corners, one of the four corners, in the bunkhouse. He have a little table in there and a chair and he sit down and roll Prince Albert tobacco cigarettes, tailor made, we call it. And then he just look to us. Because we play cards and we laugh in the bunkhouse. And then he turn around and look at us and cuss everybody, go back and forth, back and forth, just like a lion in a cage. Then in the morning he get up early and go get himself a cup of coffee and just go back and forth, back and forth to the bunkhouse, talking to himself. We used to get mad because he get up in the morning and woke everybody up. I remember one day there was the foreman asking him, 'Juan, why you get up so early and wake everybody up?' He say, 'When I get up, everybody get up!'”

Juan Ayon is buried in Santa Barbara at Calvary Cemetery. A grave marker was placed on his previously unmarked grave by the Santa Cruz Island Foundation in 1996.