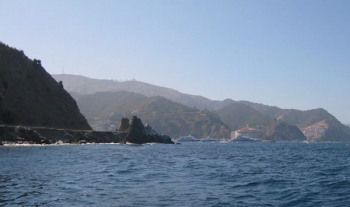 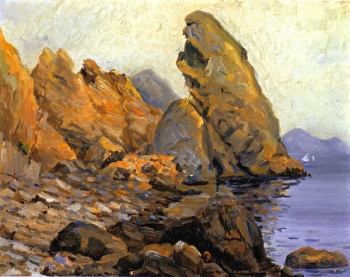 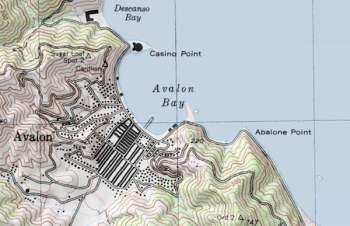 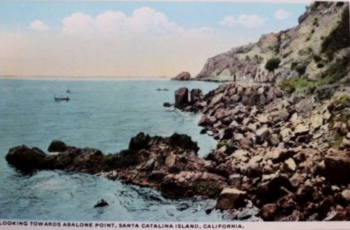 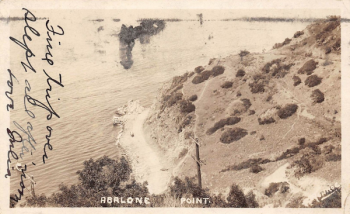 April 5, 1901 [AL]: “On Catalina Island a lady and a gentleman, tourists, walked to the beach by way of the trail, but seeing a long stretch of sand, attempted to return by way of the beach. When they reached Abalone Point they found their way closed and they must either retrace their steps or scale a small cliff, and they undertook to climb it. After laboring up 200 feet they came upon a place more difficult than any yet encountered. Rocks and shale were slipping beneath their feet and dashing into the foaming waters below. It was still a hundred feet or more to the top of the cliff, and when they tried to return to the beach the woman became dizzy and could not move. The man reached the trail and came to town for help, leaving the woman on the cliff side. J. Gardner took his launch, and, with Al Shade and Gus Knowles repaired to the spot. Shade and Knowles climbed up to the woman and fastened a rope about her, and she was drawn up in safety. The woman refused to giver her name, as did her companion, for she said she had traveled all over the world, climbed the Alps and the Himalayas, and did not like the proposition of being knocked out on a little 400-foot climb on Catalina.”

July 13, 1905 [LAH]: “Avalon, July 12. Thirty horses and a small army of workmen are today engaged on the construction of an incline railway, which, when completed, will connect Avalon and Pebbly Beach, in the course of which Abalone Point mountain will be traversed. The structure is planned somewhat on the style and principle of the ‘Angel’s Flight’ in Los Angeles, but will require a greater outlay of capital.”

April 21, 1909 [LAH]: “Avalon, April 20. In defiance of law, a body of Japanese fishermen are today hauling a seine off Abalone Point, which is but a short distance from the mouth of the city sewer. The catch of fish is taken by the alleged miscreants is said to be large, consisting of sardines, rock bass and yellowtail. Notices were posted here yesterday by Game Warden Morgan.”

February 12, 1918 [TI/Avalon]: “While working at the Abalone Point rock quarry, B. R. Scott injured his knee a few days ago. A few days rest will probably relieve the injury, in the opinion of his physician.”

March 19, 1918 [TI/Avalon]: “Since the opening of the rock quarry at Abalone Point closed the surf line road to Pebble Beach, the old roadway over the mountain ridges has been repaired and reopened, and has become quite popular, both for hikers and automobile parties.”

July 30, 1926 [San Pedro News Pilot]: “Local man on tug sees body afloat. Believe woman was in skiff stolen near the club. Efforts to locate the body of a woman clad in a green bathing suit which was sighted floating face upwards in the sea several hundred yards off abalone point, Santa Catalina Island, yesterday by Engineer Heywood of the tug Vivo, were without result up to this afternoon. Men in small boats under the direction of Clarence Patton, assistant chief criminal deputy sheriff, who is temporarily in charge of the constable's office at Avalon, had been searching the waters near the island since yesterday noon. A report that a man and woman who left Avalon, Catalina Island in a 40-foot launch, the Sea Dreamer, were missing, was found to be incorrect when the owner of the boat, a Glendale man, reported that the craft reached San Pedro with the two on board. The man is now in Pasadena and the woman in Los Angeles, it was reported. The body of the woman was sighted in the ocean yesterday by Engineer Heywood of the tug Vivo. The body disappeared after Heywood sighted it. The tug was unable to stop to pick up the body because it was towing two rock-laden barges. Instead, the engineer and the captain, Peacho Davis, reported the incident at Avalon. Heywood said the woman was wearing a green bathing suit with red Egyptian figures on the front and a white belt. She was floating face upward in the water, he said. Captain Davis said the tug had only proceeded a short distance further when a skiff, taken from the yacht Puritan at Avalon by a man and woman Wednesday afternoon, was found riding high on the waves with both of its oars laid inside. "I believe we will be able to find the body of the woman soon," Patton declared. "I am informed here that a strong tide setting to the westward yesterday may have carried the body several miles away from the island and probably brought it back again during the night.”

July 30, 1926 [San Pedro News Pilot]: “All efforts to identify body of woman fail. Fear local resident may be victim of foul play. Search is being made today for a woman's body, garbed in a green bathing suit with a white belt, which was sighted yesterday half a mile from Abalone Point, Catalina, by Engineer Heywood, the tug Vivo, which was towing two rock barges. The men on the tug also saw an empty skiff belonging to the power yacht Puritan, but were unable to stop to pick up the body because of the tow she had behind. The skiff was reported to be riding high and dry, with the oars carefully laid inside. Nobody has been reported missing from the island and the case is causing deep mystery at Avalon, where it is believed that the woman may have been the victim of foul play, or she may have become exhausted while swimming and drowned. D. M. Renton, superintendent at the island, dispatched a glass bottom boat and a seaplane to search for the body. Edwin J. Abbott, secretary of the Catalina Island Yacht Club, reported that the skiff was taken from its berth at the club out to sea, but was too far away when he saw them to be identified. The Puritan belongs to Irving W. Benton of 900 South Westlake Avenue, and he reported he gave nobody permission to use the skiff. It is believed that the couple may have used the skiff to set well out for a deep-sea swim by diving from the skiff, and that both may have drowned.”