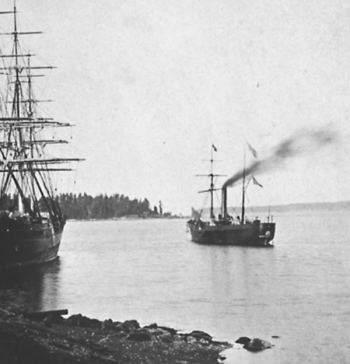 The only known photo of Active

Active (#1209) (1849-1870), New York-built wooden 172-foot U.S. Coast Survey vessel used in the survey of the West Coast of North America from British Columbia to the Mexican border. She was formerly the schooner-rigged Goldhunter purchased by the U.S. government in 1852 from the Pacific Mail Steamship Company to replace their survey steamer, Jefferson, which had been lost in Patagonia. Active was outfitted at Mare Island, California into a 750-ton side-paddle wooden steamer armed with two guns. In 1853 under the command of Lieutenant James Alden, she worked the coast from Point Conception to Point Loma, including the Santa and Santa Catalina Island. “The Active was a fearsome symbol of white man’s strength as she chugged along, puffing out black smoke, her guns exposed for all, but especially the Indians, to see.” She served the Survey until 1861 when she was sold to the California, Oregon & Mexico Steamship Company. Nine years later, her passenger service came to an end on June 5, 1870 when she struck a rock in dense fog twenty-two miles south of Cape Mendocino. All 170 passengers on board were rescued.

April 16, 1852 [DAC]: “The U. S. Surveying Steamer Active — This fine steamer, which has been purchased for the U.S. Government, to be used in prosecuting the Coast Survey, has been refitted and placed in excellent running order. She will sail today for for the purpose of continuing the survey of the coast between this port and San Diego. The following is a list of her officers: Lieutenant Commanding, Richard M. Cuyler… Mr. George Davidson goes down the coast for the purpose of making observations at the most important points between this and San Diego.”

December 25, 1852 [DAC]: “Charts of the Coast Survey. Mr. W. B. McMurtrie, the able draftsman of the Board of Coast Survey, and attached to the surveying steamer Active, at present in our waters, has furnished us with the recently finished charts of the surveying party on our shores. They are drawn by him and are engraved in the east in beautiful style on fine drawing paper. The sketches and charts before us are of Prisoners Harbor, San Clemente Harbor and Cuyler’s Harbor…”

U.S. Surveying Steamer Active, San Francisco, June 15th, 1853 Gents: I enclose herewith for publication Lt. Commanding Stevens’ Report for the Survey of the Shoal or Bank to the southward of San Clemente and San Nicolas islands. This examination proves conclusively that the breakers seen on that spot in 1846, by the U.S. Frigate Constitution, and more recently by the steamers Pacific and Cortes, was nothing more or less than a heavy ‘tide rip.’

Editors, Alta California U.S. Surveying Schooner Ewing, off San Pedro, June 1st, 1853 Lieut. Commanding James Alden, U.S.N., Chief of the Hydrographic party on the West Coast: Sir — I have the pleasure of reporting my return to this place, from the shoal to the southward of San Clemente and San Nicolas, which I have made a thorough examination of, having been five days anchored upon it. The shoal or bank is in Lat. 32 deg. 30 min. N., long. 119 deg. 10 min. 50 sec. W. by N., (by compass), distant forty-six miles; Island of Clemente bears N.E. 1/2 N., (compass), distant forty-three and a half miles. The nature of the bottom is hard, composed of white sand, broken shells and coral; the least water found ten fathoms, which would be about nine reduced to low water, and the character of the soundings, as you will find upon reference to the chart which I send herewith, irregular and abrupt. The weather, while at anchor upon the shoal, we found different from that which ordinarily prevails upon the coast in the vicinity, bearing a strong resemblance to that upon the Banks of Newfoundland. The current is irregular, frequently setting against the wind, and running with a velocity of nearly two knot per hour, producing a heavy sea and causing the water to break in heavy weather as has been reported.

August 20, 1856 [SFDEB]: “The San Diego Herald says, Captain Alden and his assistants having completed the survey of our harbor and the coast in the immediate vicinity, sailed with the Active on Monday morning last, for San Clemente Island. They intended making a thorough survey of this island, and that part of the coast lying between Monterey and San Francisco.”