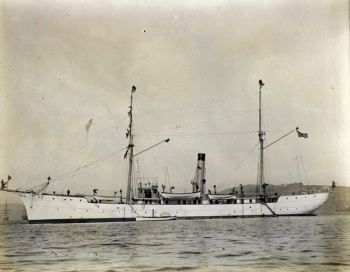 Albatross (U.S.S. Albatross)(G.V.Q.B.)(1882-1930+), 200-foot research vessel built in Wilmington, Delaware for the U.S. Fish Commission. She was used for governmental marine research, and is reputed to be the first research vessel equipped with electric lights from a Thomas Edison design.

January 18, 1889 [SBMP]: “The United States Fish Commission left San Diego on Tuesday night and is now dredging among the Santa Barbara Islands. She will remain in this vicinity three or four weeks and probably as many months. A full description of the Albatross was printed in the Press several days ago.”

February 4, 1889 [LAT]: “The Albatross is commanded by Captain Tanner, and is in the service of the United States Fish Commissioners. She will make a trip to the Santa Barbara Islands, and other large islands near here.”

February 4, 1889 [LAT/SD]: “The fishing commission steamer Albatross, returned to San Diego on Monday from a trip of inspection to Cortez Bank, 100 miles due west of that city, where she reports finding a valuable fishing ground. On a continuation of the bank [Tanner Bank], 30 miles toward San Clemente Island, were found black cod, several specimens of rock cod… The Albatross will proceed to the Gulf of California for the rest of the season.”

February 5, 1889 [SBDI]: “The National City Record, of San Diego County, gives the following description of the Albatross and her work: The Albatross is commanded by Captain Tanner, and is in service of the United States Fish Commission. She will make a trip to the Santa Barbara Islands, and other large islands here. This trip will occupy about a month, when she will return here for coal, then go south and explore the waters of the Gulf of California… Professor Gilbert is in charge of the scientific department, and is ably assisted by Professor Townsend… The Albatross is lighted by electricity, and has all the modern appliances for comfort and accuracy.”

February 25, 1889 [SBDI]: “Professor Charles H. Gilbert, on board the United States fish commission steamer, Albatross, stated to a reporter of the San Diego Sun that he knew of no place in the world where sardines can be secured in greater quantities than in San Diego bay…”

August 25, 1889 [LAT]: “Wonders of the sea. What the Albatross found in the Pacific. Lieutenant Commander Tanner of the navy has made an interesting report to the Fish Commission of the work of the Albatross… Rich hauls were made at Beecher Bay in about 270 fathoms of water…”

August 26, 1889 [LAT]: “Lieutenant Commander Z. L. Tanner of the Navy has made an interesting report to the Fish Commission of the work of the steamer Albatross from the beginning of the present year to June 30 last… Professor Gilbert, the chief naturalist aboard, reported a great number of ancient human remains exposed on a strip of drifting sand 200 yards in width, extending from Carrington Point [Santa Rosa Island] to the sea about 3/4ths of a mile. The only implements seen were stone mortars which were scattered over the surface in great numbers, all broken, evidently by design, for they were too solid to have been fractured by accident…”

May 8, 1896 [LAT/SB]: “U.S. steamer Albatross left Santa Barbara Monday, the 20th inst., for San Pedro where she will remain a week. The Albatross has been dredging around Santa Cruz and Santa Rosa islands, but discovered nothing of importance. It is an opportune time for the vessel to make some investigations of the ledge of rocks and new species of fish caught near the Point Hueneme lighthouse by Hon. T. H. Merry on one of his fishing excursions lately.”

August 8, 1897 [NYT]: “…The steamer Albatross has recently been investigating the off shore fisheries of Southern California, and has located several banks famous for groupers and rock cod…”

April 3, 1898 [LAT/SP]: “The sloop Kee Wee, a twenty-ton craft owned by F. K. Whittley and engaged in the traffic between this port and Santa Catalina and San Clemente, capsized this afternoon about a mile off Deadman’s Island. The wind was blowing about forty miles an hour from the west. Gus Knowles and George Johnson, the crew of the sloop, were picked up by a boat from the United States Fish Commission steamship Albatross, which was anchored about a quarter of a mile away. The Kee Wee was returning from San Clemente Island with livestock when she turned turtle. The Albatross leaves tonight for Mare Island.”

February 17, 1904 [LAT/SP]: “The United States Fish Commission steamer Albatross will sail tomorrow from San Francisco for a cruise along the coast to collect fish for the museum at Washington…”

April 11, 1904 [LAT/SCat]: “Avalon. The U.S.S. steamer Albatross, Captain Smith, of the U.S. Fish Commission, came into port last evening and will lie here until tomorrow when she will proceed northward. She has been fishing and dredging in the waters about Coronado, Clemente and Catalina islands for several weeks, and has brought up a lot of curious forms of marine life…””

March 7, 1911 [LAT]: San Diego. Returning today from a six day cruise as far as the Guadalupe Island, the scientific expedition of the Smithsonian Institution brought on the Albatross six rare specimens of southern waters known as sea elephants. Dr. C. H. Townsend, in charge of the expedition, states that the specimens in New York are worth at least $20,000… Dr. Townsend states that it is his intention to ship the young sea elephants to New York…”

June 11, 1911 [WP]: “U.S.S. Albatross makes a voyage into Gulf of California. The United States steamer, Albatross, with a corps of scientific men on board, has just completed an unusually interesting expedition down the southern California peninsula, and back to San Francisco. The party, in addition to the chief, Dr. C. H. Townsend, acting director of the American Museum of Natural History in New York, included Dr. J. N. Rose of the National Museum in Washington, botanist… Several elephant seals were killed at Guadalupe Island and put in brine, while six of the younger animals were captured alive…”

July 30, 1911 [LAT]: “Huge sea elephants in California gulf. One of the most fruitful and interesting scientific expeditions ever made in the Southwest was that recently to Lower California aboard the U.S.S. Albatross in the interest of the American Museum of Natural History, and which is described by Pingree I. Osburn, the Pasadena young man who led the way… By far the most important discovery was herds of huge sea elephants…”

July 31, 1911 [WP]: “Sea elephants found. The expedition of the American Museum of Natural History, which returned from the Gulf of California on the U.S.S. Albatross, found on one of the islands in the gulf a large number of strange mammals called sea elephants… The largest herd of these water elephants comprised about 50 of all ages…”

November 28, 1916 [TI/Avalon]: “The U. S. Fisheries steamer Albatross, which has been on a cruise for the past nine months studying the habits of the albacore, sailed for San Francisco Friday… For almost six months the Albatross has remained in the waters between San Diego and Point Conception…”