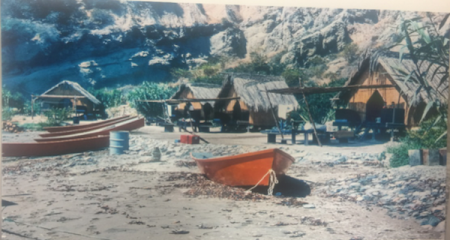 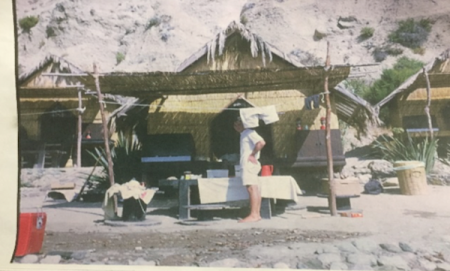 Albert’s Anchorage, Santa Cruz Island, a popular boating harbor on the south side of the island, is located just to the east of Coches Prietos. The place name appears on the June 1882 U.S. Coast Survey map Pacific Coast from Santa Monica to Point Conception, including the Santa Barbara Channel, California, J.E. Hilgard, Superintendent.

“The shack of Frank Hansen [fisherman] at Albert’s has been destroyed during the absence of the “Wild Man.”

Although Albert’s Anchorage is inaccessible by road, it has a source of good water, and therefore in the 1960s it was chosen as the site for the development of a recreational dive camp. The Santa Cruz Island Company entered into an agreement with Bill Huffman and Rick Lagomarsino to operate a diving club. As Carey Stanton said:

“The club was a good idea basically, but it proved to be totally unmanageable and was disbanded after three or four years of operation. The anchorage itself has no road access, and must be hiked to from within the island. The only practical way to get there is by boat. For the operation of the club, a faux Polynesian village with 6 beach huts for guests and a chief’s hut for staff was constructed by hauling materials ashore. It was a very attractive place and did not alter the ecology. It was harmless in that respect. People would sign up for their island visit, arrive by boat, and be taken care of by a guide. The idea was that they would dive locally, and stay in the huts for a few days. The club provided dories for their use while diving. The people agreed in advance not to come ashore anywhere on the island except at Albert's. However this did not prove to be the case. AS soon as their dories would round the point away from the view of the guide, they would go where ever they pleased, and were all over the island. There was no way to control them effectively. Advantage was taken of the situation from the beginning. One stormy day some men and several small children came through the surf in a dory at Christy Beach. They had rowed there from Albert's — quite some distance! It was impossible for them to row back against the currents. The Club also lost a guide [Edward Bell] who presumably drowned. These events, compiled with very wet winters, bad weather and landslide possibilities, prompted the closing of the Club. Safety factors became unmanageable and the Club was no longer physically possible to control.” 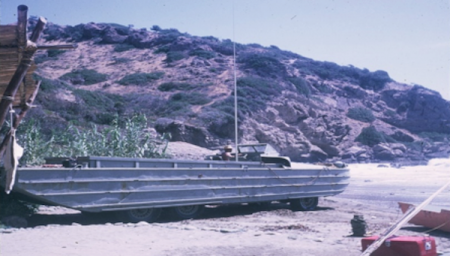 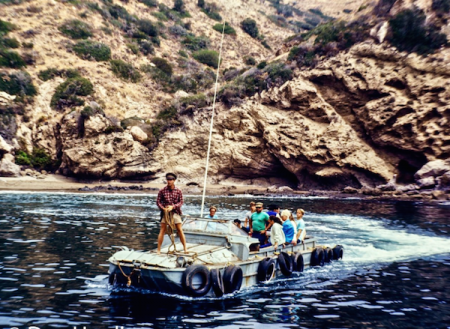 A World War II amphibious duck serviced the camp from boats to shore. The camp brochure advertised “something right out of the South Seas,” and promised at no extra charge: “thatched cabanas, 15-foot sea skiffs, outboard motors, unlimited compressed air, all cooking facilities with fuel, pots, pans cutlery, tables, stools, Colman lanterns, running water, firewood, ice, and toilets.” In addition it was guaranteed there was “no oil damage” after the Santa Barbara spill.

In 1968, camp guide Edward Bell died in a drowning accident, and a landslide destroyed one of the unoccupied guest huts. The business was discontinued in 1969 after a large boulder in a landslide took out one of the huts.

August 3, 1969 [LAT]: “Shangri-la isn't across the sea; it's just across the channel... The hunting is run by the Santa Cruz Island Club, which is operated by a pair of Ventura businessmen under an arrangement with Dr. Stanton. The club has three activities: A camp for bow hunters at Prisoners' Harbor on the north side of the island, a lodge for gun hunters at the Christi Ranch on the west side of the island, and a skin divers' resort at Albert's Anchorage on the south side of the island. Each of these is a rather closely supervised operation—the hunters make advance reservations and are accompanied by guides, and the visitors to Albert's Anchorage come only on chartered boats which have made arrangements with the club. Idle wandering on Santa Cruz Island is not encouraged. I went out to Santa Cruz with a group of hunters one day, taking off from Ventura Airport in a six-passenger Cessna... I was planning to take a look at another part of the island—the skin divers' camp so that morning I separated myself from the hunting expedition and started out on foot for Albert's Anchorage. It was a short and easy stroll from where I left the guides. The beach at Albert's Anchorage was clean and warm in the morning sunshine. It has a Tahitian ambiance, which is no accident. There are six neat bamboo huts along the beach, facing out toward the neat little cove where one small boat stood at anchor and a big pelican flapped about in circles, diving for fish. I was planning to meet a boat, the Island Packer, that would be coming in around noon with a load of skin divers, and I did not know there was a full-time caretaker on the beach. I was surprised to find him there, getting ready to meet the boat. Albert's Anchorage is used mainly by diving and surf-fishing parties, although the whole setup—the secluded beach with six bamboo huts—has possibilities that I think Hugh Heffner would appreciate. Whatever your intentions, it costs $240—plus boat fare—to take it over for the weekend. Skin diving is easily the main sporting attraction of the islands. Most of the group at Albert's Anchorage that day were from the San Francisco area, and a group of that size is only a small fraction of the total number of divers who come to the islands on a weekend. Jack Jannis, a Santa Monica diving instructor who frequently takes groups to Anacapa and Santa Cruz, estimates there are a minimum of a thousand divers in the water around the islands on an average weekend day...”