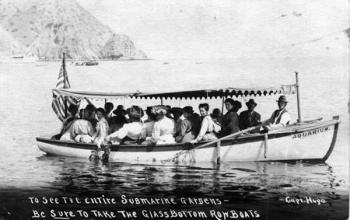 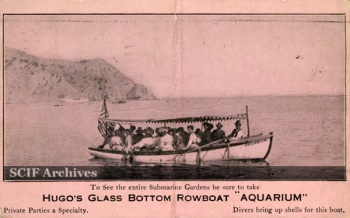 May 22, 1901 [LAT/SCat]: “Avalon. A southwester began blowing very unexpectedly last evening, and about 9 o’clock increased to quite a gale. Some of the boatmen were found unprepared, and, the gale being offshore, three boats went adrift. Two of these were valuable round-bottom skiffs belonging to Chappie, valued at $90, and the third was a glass-bottom boat belonging to Hugo, worth about $100. The loss of the boats was discovered at about 10 o’clock last night and Chappie procured the services of George Michaelis with his little fishing launch, and went out to find them. Nothing was seen of them in the darkness, and the searchers returned thoroughly drenched by the rough sea…”

June 13, 1901 [LAT/SCat]: “Avalon. Hugo’s glass-bottom boat, which went adrift in a storm three weeks ago was recovered after an exciting experience by George Michaelis, who with his little launch, accompanied by Hugo, went to Newport after the craft Monday morning. They started homeward with the glass-bottom oat in tow, at 9 A.M. A heavy wind and rough sea sprung up, and after a hard struggle for several hours, it became apparent that the launch and her tow could not make the island. The fear of running out of gasoline in mid-channel in the raging seas, determined them to run to San Pedro for safety… Hugo, who has been a sailor all his life, says he would not take such chances again for all the boats in Avalon Bay.”