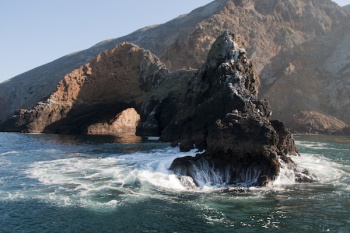 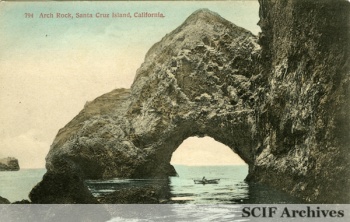 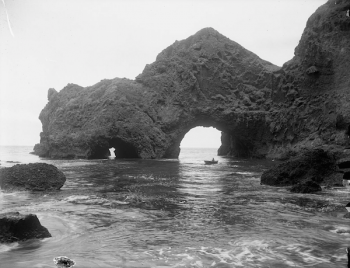 Arch Rock, Santa Cruz Island is located to the east of Cueva Valdez and to the west of Lady’s Harbor on the north shore of Santa Cruz Island. In July, 1924, tragedy struck a very large camping party when three people from Santa Barbara, Mary Stewart Wilkinson, her brother Milton Stewart, and Dr. Hal Bishop were drowned in a skiff accident in heavy wind and seas off Arch Rock. April 20, 1958 [SBNP] the Coast Guard rescued two men whose cabin cruiser Kathy was smashed to pieces against Arch Rock. The men swam to shore where they were rescued. A second Arch Rock, Santa Cruz Island, is also used to describe the arched point that separates Upper and Lower Twin Harbor [Sexton 1922]. This place name appears on the Santa Cruz Island Sheet B topographic map.

May 16, 1909 [SBMP]: “R. H. Morris, a photographer of this city, left on the Santa Cruz Island boat yesterday to spend a week at the island taking pictures of the Company. Mr. Morris will make his headquarters at the ranch house near Prisoners’ Harbor and from there he will tramp over the hill and up and down the coast taking pictures as his fancy directs. The Santa Cruz Island Company for whom he is going is desirous of having views of the ranch house, the vineyard, and the sheep-shearing scenes and the herds of cattle. He will also get pictures of Lady’s Harbor, the Painted Cave, the Arch Rock, and many other beauty spots on the island.”

July 10, 1910 [LH]: “Santa Barbara, July 9. Isabelle Pierce, the 16-year-old daughter of A. M. Pierce, a furniture dealer; and Thomas Del Valle, the 17-year-old-son of Henry Del Valle, of the old California family, were drowned and six others had a narrow escape from death when another boat in which they were rowing three-quarters of a mile from the pleasure camp at Santa Cruz Island capsized. Six of the party were women, three of whom were saved by the heroic work of Eugene Whitcomb, whose mother is Mrs. E. V. Whitcomb, a sister of Lois Were, who was with the party. Mrs. George A. White, the wife of a member of the state dental board, was among those rescued. Some of them were in the water two hours. The body of the boy was brought here tonight. The other was not recovered. The accident was due to blind breakers off Arch Rock.”

July 26, 1924 [SBMP]: “Peveril Meigs, Jr., his 16-year-old son Stewart, and Walter Bishop reached Lady’s Harbor, Santa Cruz Island, yesterday afternoon to search for the bodies of Dr. Harold Bishop of Alhambra, and Milton Stewart of Santa Barbara, with Mrs. Walter E. Wilkinson victims of a sailboat accident Tuesday morning off Arch Rock. Dr. Bishop was the brother of Walter Bishop, one of the searching party. The party is provisioned for a stay of ten days or longer. It was transported to the island by Captain Bob Ord of the Roncador. Upon leaving Lady’s Harbor Captain Ord headed toward San Miguel Island for cargo. He will return for the searchers in five days, it was stated. Mr. Meigs stated, before his departure, he had small hopes of recovering the bodies until they are washed ashore. Walter E. Wilkinson, husband of one of the victims, was yesterday reported to be steadily recovering from the effects of his battle with the waves. Mr. Wilkinson was the only member of the sailboat party to excape with his life.”