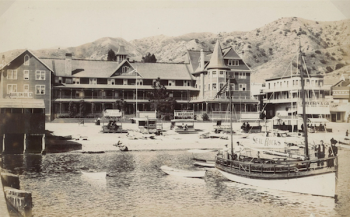 April 1, 1900 [LAT/SCat]: “Messrs. F. W. Clark and E. L. Doran have gone to San Nicolas Island on a curio-hunting expedition. They chartered the Avalon to take them over, and it is to return for them at the expiration of two weeks. San Nicolas is one of the richest of the Channel Islands in relics of the prehistoric people who inhabited all these islands and who are only known to us through the antiquated relics of stone and bone which they left behind…”

April 12, 1900 [LAT/SCat]: “The Avalon returned from San Nicolas Island last night with E. L. Doran, F. W. Clark and Al Holbrook, the curio hunters who were left there ten days previously. They came back laden with all sorts of spoils, which the island sands were made to yield up. When asked about the stories of the Chinaman starving to death on the island, Mr. Clark replied that the Chinaman was certainly dead, but that it was not from actual starvation. Their supplies were stolen, but they were then in as good condition to live as were the former natives of the island, who had no base of supplies except the food they found in the waters…”

April 28, 1900 [SBMP]: “Messrs. F. W. Clark and E. L. Doran visited San Nicolas Island on a curio hunting expedition. They chartered the Avalon to take them over, and it returned for them at the expiration of two weeks. San Nicolas is one of the richest of the Channel Islands in relics of the prehistoric people who inhabited all these islands and who are only known to us through the antiquated relics of stone and bone, which they left behind. On most of the islands there are frequent pueblos or city, enormous mounds and windrows of shells being found all over the island.”

November 14, 1901 [LAT/SCat]: “Three or four weeks ago, when the schooner La Gironde was reported ashore on San Nicolas Island, a party of sailors came over and engaged the yacht Avalon to take them from here to San Nicolas. On her return trip the Avalon encountered some very rough weather, and when off Santa Barbara Island lost her skiff, which she was unable to pick up in the darkness. A few days since the skiff drifted into the little bay at Gallagher’s, on San Clemente Island, the headquarters of the San Clemente Wool Company, and was picked up in perfect condition by the Robarts brothers, who are in charge of the island. It had drifted nearly a hundred miles.”

May 6, 1902 [LAT/SCat]: “Avalon. The yacht Avalon, Captain J. E. Mathewson, with Gus Knowles and Harry Doss as supercargoes, which was chartered by Mrs. Trask to take her and a few friends to San Nicolas Island for a month’s botanizing, had a hard time landing. They left here Saturday evening, April 26, and the yacht only reached home again last Saturday night… ”

June 4, 1902 [LAT]: “The yacht Avalon returned last night from San Nicolas, bringing back Mrs. Trask from a month’s botanizing on that island. They were gone a week and encountered some pretty rough weather, but not more so than was expected. Notwithstanding the revenue cutter Bear reported that the wrecked schooner La Gironde had disappeared, it still lies there on a sand spit and one can walk all around it at low tide.”

September 5, 1902 [LAT/SCat]: “The yacht Avalon, which is under charter to E. W. Scripps of San Diego, who is with his family and retinue at the Isthmus, has just returned from a cruise about San Clemente Island with John Scripps, his tutor and physician on board.”

September 22, 1902 [LAT/SCat]: “Avalon. The yacht Avalon returned Friday from a cruise about the upper Channel Islands of a week or so, visiting the great caves of Santa Cruz, and nearly all the other islands and the town of Santa Barbara. The Avalon is chartered by John Scripps, who has made his headquarters at the Isthmus for the past two months.”

August 28, 1904 [LAT/SCat]: “Avalon. There was considerable excitement here yesterday because of the rivalry which has been generated between the Meteor Boat Company and the Avalon Company, both of which have maintained barbecue excursions twice a week all through the season, giving a dinner at the Isthmus. Yesterday was made an extra occasion, the Meteor Company taking its big glass-bottom boats, in addition to the Meteor, and sending to Los Angeles for a band of minstrels in addition to the De Nubila Orchestra. The Avalon Company cut the price and there was a fight for supremacy. To carry all its patrons the Avalon Company engaged the Ramona and the Emerald, in addition to the Avalon, and all were filled to the limit. When the barbecue was served on the beach it was a great sight. Great canvas awnings had been erected and string after string of tables was loaded with edibles. About five hundred people were served, and this did not include the private parties, which had come on half a dozen independent launches. The Meteor Company’s menu consisted of abalone chowder, barbecued fish of several varieties, bread and butter, salad, cake watermelons, of which there were hundreds, and all washed down with coffee. The excursionists reached Avalon again at 6 P.M.”

September 23, 1904 [SBMP]: “Catalina Party on Santa Cruz. Campers find Channel Islands far superior to the more southern resort. A party of prominent people from Catalina are making a three weeks' tour of the Channel Islands, and have established a most complete camp at Quava [Cueva] Valdez bay on Santa Cruz Island, where they have been for over a week. The party left Avalon on the 14th of September in the gasoline sloop Avalon, which carried full camp equipment and supplies for the trip besides all the members of the expedition. They sailed immediately to Santa Cruz Island and established their camp there, from which they make side-trips to other parts of the island and fishing excursions out into the channel. Their camp is a most picturesque one, being composed of nine tents placed on the beach under the protection of the overhanging cliffs, and near where a fresh water spring bubbles out of the rocks. A large tent in the center is reserved for pleasure-making and for a dining room. They have employed an experienced cook, Mr. Pierce, who formerly worked in that capacity at the Potter Hotel, and have all their meals served in the big tent. The other tents are appropriately decorated with humorous names, such as "hens' Roost," "Orphans' Home", "Butt Inn", "Parker's Inn", etc. They have an abundance of small row boats in which excursions are made into many caves that have been washed out by the waves on the shores of the island. Fishing parties returning from the island report that the Catalina people are most enthusiastic about the splendid fishing that exists about the island, saying that it is far superior to even their own far-famed Avalon for fishing purposes. They can catch a great variety of fish within a stones throw of their camp. The Avalon party consists of Charles Parker and wife, who organized the party; Captain Mathewson and wife, Mrs. Pratt, Chris Ringson, George Aull, Peter Reyes, Edward Edmondson, John Johnson, and the Misses Josephine Foust, Emma Foust, Lena Kelly, Lena Nelson, Elizabeth Hudson, Cora Geruer and others. They expect to explore Santa Rosa and San Miguel Islands before returning, and will visit Santa Barbara for a few days, arriving here next Monday.”

September 23, 1904 [SBMP]: “A party of prominent people from Catalina are making a three weeks' tour of the Channel Islands, and have established a most complete camp at Cueva Valdez bay on Santa Cruz Island where they have been for over a week. The party left Avalon on the 14th of September in the gasoline sloop Avalon...”

September 29, 1904 [SBMP]: “Avalon is now in Santa Barbara. Twenty-five of the most prominent residents of that popular resort on Catalina Island arrived in the city yesterday morning in the gasoline sloop Avalon, and are taking in the city in a most enjoyable manner...”

October 1, 1904 [SBMP]: “The gasoline sloop Avalon, which has been in this port for two days with a party of twenty-five Catalina people, has returned to Santa Cruz Island, where the party has established a fine camp.”