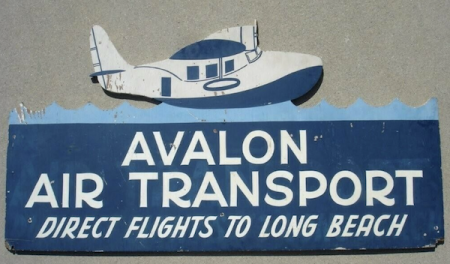 October 8, 1953 [Valley News, Van Nuys]: “Two Valley Rotary clubs — Canoga Park and Sun Valley — have chartered planes to take them to Catalina Island today for the convention of Rotary District 160B. The planes will be furnished by Avalon Air Transport, owned by Richard Probert, who with Andy Devine previously owned Probert-Devine Flying School. Probert will pilot the Rotarians to Avalon. He will pick up the Canoga Park group at 10:30 a.m. today from San Fernando Valley Airport and the Sun Valley group at 9:30 a.m. from Burbank. The new air service which started operations Aug. 27 of this year and normally operates from Long Beach Municipal Airport, has carried more than 1500 passengers the first month, making two flights a day. The flight takes 17 minutes from Long Beach to Avalon and 25 minutes from Burbank to the island.”

March 19, 1954 [LBI]: “Catalina dance set. A delayed St. Patrick's dance, with proceeds going to St. Catherine's Church of Avalon, will be held Saturday, 9 p.m. to 1 a.m. in Catalina's Casino. Music will be provided by Kay Riggs orchestra. Extra flights to the island have been scheduled for the event by United Air Lines and Avalon Air Transport.”

August 25, 1958 [LBI]: “Men from Catalina Island clamber atop the wing of Avalon Air Transport's 24-passenger Sikorsky amphibian in Avalon Harbor Saturday evening as they attempt to bring up its wing which dipped into the water when wing float gave way upon landing. The aircraft was landing empty on a final trip to pick up passengers from the island. No one was injured. Airline officials said the craft was not seriously damaged. The float apparently struck a floating object.”

September 9, 1958 [LBI]: “Worker bitten by snake. A 29-year-old quarry worker was evacuated fro Catalina Island by an Avalon Air Transport flying boat after he was bitten by a rattlesnake Monday afternoon. Richard A. Taylor of Avalon was treated at Seaside Memorial Hospital, where his condition was reported good. He was then transferred to an Inglewood Hospital. Taylor was bitten on his left calf while working in the Graham Bros. Rock Quarry on the west side of the island, 15 miles from the city of Avalon. Dick Probert, chief pilot of the airline, said he was just ready to take off for Long Beach at 6 p.m. when Taylor was brought alongside the four-engine Sikorsky flying boat. An ambulance was waiting at Pacific Landing when the plane landed. Taylor had received first aid treatment and serum before leaving the island.”

October 9, 1961 [LBI]: “A twin engine Avalon Air Transport Inc. amphibian plane with 10 persons aboard crashed during takeoff Sunday from choppy, windswept Avalon Harbor. The nine passengers and pilot escaped from emergency exits soon after the $45,000 Grumman Goose plunged nose-first into the harbor, about 300 yards off shore. The aircraft later sank as it was being towed to shallow water. None of the passengers or pilot was injured seriously. All were plucked from the water within a matter of minutes. All 10 were treated at Avalon Municipal Hospital for shock and exposure. Gail Cason, 18, of 223 Glendora Ave., recently named Miss Lakewood, was admitted for observation. Miss Cason had represented the City of Lakewood at the Catalina Indian Festival and was returning when the plane crashed. She escaped through a window in the pilot compartment.”