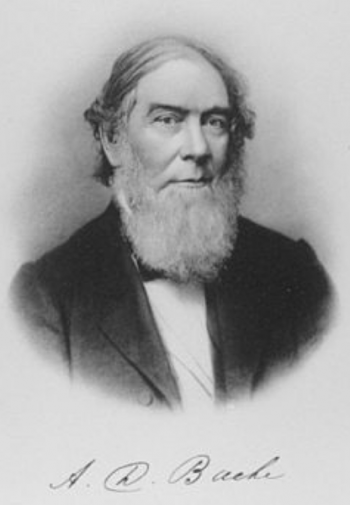 BACHE, Alexander Dallas (1806-1867), physicist and great-grandson of Benjamin Franklin. He followed Hassler as superintendent of the United States Coast Survey, a position Bache held from 1843 (Ferdinand Hassler's death) until his own death in 1867. Bache was dedicated to elevating American science to the front ranks of the world community. As opposed to Hassler who was politically naive, the well-connected Bache moved smoothly through the American political scene. He was dedicated to an overall strategy of publishing the results of the Coast Survey work and the related work of other professional scientists. Letters sent to Bache from various expedition members of the topographic and hydrographic surveys of the Pacific Coast are on file in the National Archives. His Report of the Superintendent of the United States Coast Survey for 1852 describes the Santa Barbara Channel and the eight Channel Islands of San Miguel, Santa Rosa, Santa Cruz, Anacapa, San Nicolas, Santa Barbara, Santa Catalina and San Clemente.

September 27, 1860 [DAC]: “U.S. Coast Survey — We understand that Captain W. M. Johnson, who has been for some time employed on the topographical survey of Santa Cruz Island, in the Santa Barbara Channel, has been ordered to Half Moon Bay, near San Francisco, to complete a gap which had been left in the survey at that point. For this purpose he set out in his schooner to sail up the coast, but encountering a heavy gale, he was driven out to sea a long distance—over 200 miles. On Sunday last, he made the harbor of San Pedro, where the stores and instruments were landed, not much improved by contact with the sea, which at times broke over the little craft. The schooner has been brought up the creek to new San Pedro, where she will lie for the winter, the Captain going up by the steamer Senator. Captain Greenwell, of this department, has gone to Washington, expecting to return about March next; Mr. Bache, formerly operating with Captain Johnson, has also gone East, and expects to be located on the department there.”