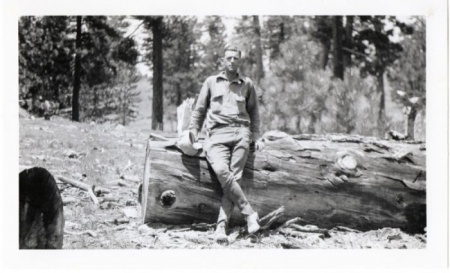 Badger collected at least a dozen sets of bald eagle eggs from Anacapa and Santa Cruz islands, five of which have been located:

His egg collection and field notes are located at the Western Foundation of Vertebrate Zoology.

March 2, 1917 [Field Notes WFVZ]: “A trip which I had planned for several seasons, but which for one reason or another had to be postponed, was finally started on March 2, 1917. In company with Lawrence and Sidney Peyton of Sespe, we left Ventura at 6 A.M. aboard Captain Bay Webster’s launch, the Anacapa, bound for Anacapa Island, sixteen miles off shore. The purpose of this trip was to collect eggs of the bald eagle, also to visit the California brown pelican rookery. Two hours later found us anchored in a little bay at the east end of the island, just below the nesting ground of the pelican. Taking our collecting boxes, ropes, and Kodaks, we were soon rowed in and landed on the rocks at the foot of a two hundred foot bluff. It would be impossible to reach the top of the island at this point if it were not for the government having a ladder here in order to reach the lighthouse on top. Only a few minutes were required in climbing this ladder, and no sooner had we reached the top than the air was alive with pelicans. Nests were everywhere… While I was busy with my camera, the others of the party succeeded in taking two eggs of the bald eagle from a nest about a quarter of a mile away. We proceeded from here to the west end of the island where another pair of eagles had their nest. At this time, Captain Webster had a lease on Anacapa Island, and as he had a large herd of sheep pasturing there, he was about as anxious as we were that we collect all the eagle eggs we could find. Lamb meat appears to be a favorite dish of the eagle in the springtime. Upon arriving at the west end of the island we were again landed on the rocks, and from here we made our way up a ridge to a point directly above the eagles nest. This was placed on a pinnacle of rocks 140 feet below us and 200 feet above the ocean. To reach this, both Sidney Peyton and myself were lowered by means of a rope to a narrow ledge 150 feet down from the top, and from here I lowered Sidney to the base of the pinnacle. It was no easy task climbing up its steep side and reaching the top of the nest. This nest was 9 feet high by 5 feet across to top, and had been used for a number of years. It might be of interest to state that Captain Webster said that he had visited the island when a boy, probably forty years before, and that eagles were using these same nests then. It was composed of large sticks, lined with sea grass and sheep wool, and contained two infertile eggs. The eggs were ivory color and slightly nest stained. Both birds flew about, making a noise like a small chicken, but were very timid, at no time coming closer than 200 feet. From here we left for Santa Cruz Island to spend a few days…”