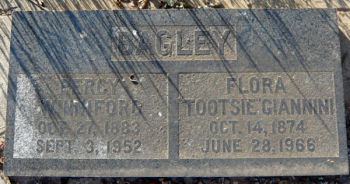 September 12, 1904 [SBMP]: “Percy Bagley yesterday took out Dr. and Mrs. Stinson, Mr. And Mrs. Flournoy and Mrs. Greenwell in his power launch, Nautilus. They returned early in the afternoon with a large catch of albacore and bonita.”

April 16, 1905 [SBMP]: “Ira Eaton's Irene, Percy Bagley's Nautilus, and William Walker's Naiad, have formed a combination and are using every effort to solicit most of the excursion business for the home boats. The McKinley, a large launch from San Diego in charge of Captain Knowles, has arrived in port for the purpose of taking visitors to the warships...”

April 16, 1905 [SBMP]: “Don Leach, Orrin Seeley, Ira Eaton, Percy Bagley, William Walker and other boat owners have combined their interests and will endeavor to give the public better boat service than they have in the past. Under this new combination a half dozen launches and sailboats will be placed in public service under a single management. A boat office and new gangway will soon be constructed on the railroad wharf, and a boatman will be on hand at all hours of the day to take orders from those who wish to take fishing or pleasure trips upon the water. They will charge a uniform rate.”

May 8, 1905 [LAT/SB]: “Craft in danger. Heavy sea at Santa Barbara… A number of small sailboats and power launches that have been built or repaired since the last storm are now at the Channel Islands, and some anxiety is felt as to their safety. Among the crafts that are at the islands are the Vixen, the Irene, Prima María, Portula, Peerless, and Walker’s launch. Bagley’s Nautilus and Gourley’s Belvedere are out riding the storm here.”

May 31, 1905 [SBMP]: “A party of eleven young Santa Barbara men chartered Percy Bagley’s launch Nautilus yesterday morning and caught 200 pounds of large fish by trolling in the channel. The catch consisted of barracuda, yellowtail and bonita. One fish weighing over 30 pounds was taken.”

November 18, 1905 [SBMP]: “Captain Vasquez of the launch Peerless had left for the wreck of the Colman to take off its pony engine. Considerable anxiety is felt in regard to the safety of Captain Vasquez and his crew of six men of the power launch Peerless which is four days over-due from a trip to San Miguel Island... Among the passengers on the Peerless was Captain Percy Bagley, one of the most experienced boatmen of this city.”

November 22, 1905 [SBMP]: “Yacht Vishnu will leave today in an endeavor to locate the missing boat Peerless. The power launch Peerless, eleven days out from this city to the west coast of San Miguel, has not yet been heard from... The Peerless sailed eleven days ago on what was figured out to be a four days’ trip to the wreck of the stranded schooner J. M. Colman; the purpose of the trip was to bring back the pony engine from the Colman. Captain Colice Vasquez was in charge of the Peerless. He was accompanied by Percy Bagley and experienced boatmen of this city: Roy White, a Bakersfield youth, George Godfrey, and two craw fishermen who were intending to remain at the camps on Santa Rosa Island.

May 11, 1906 [SBMP]: “Mr. Van Alstyne enjoyed a fishing trip with Captain Bagley in his launch Nautilus…”

May 18, 1906 [SBMP]: “J. S. Drukker and his son, Roy Drukker of New York… went out at 8 o’clock this morning in Captain Bagley’s power launch and cruised up and down the channel…”

May 19, 1906 [SBMP]: “James Gurkker, a clothing merchant of New York, and his son Roy Gurkker, were out fishing yesterday in Percy Bagley's launch and caught 37 large barracuda.”

June 10, 1906 [SBMP]: “Joseph A. Burns, the local manager of the Metropolitan Life Insurance Company, made a trip into the channel yesterday morning in Percy Bagley’s launch Nautilus. He had fair luck fishing.”