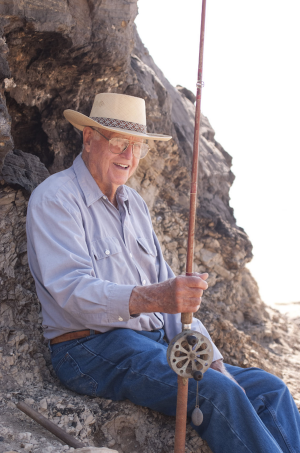 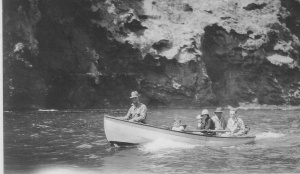 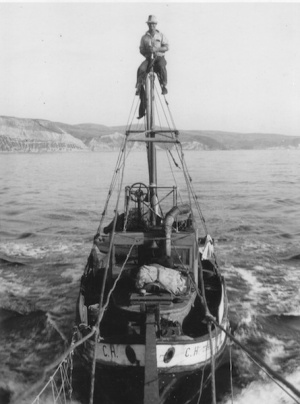 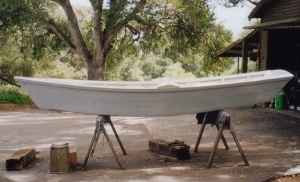 BAILARD, Lawrence Neil “Lawry” (1921-2018), 4th generation Carpinteria resident with a lifelong interest in the California Channel Islands. Fascinated by Santa Barbara's maritime history, Lawry located an original Flint skiff — possibly the last of its kind — and faithfully restored it. Inspired by the project, he then built his own replica Flint skiff.

Lawry Bailard is descended from:

They met on a wagon train from Missouri to California. With a partner Andrew bought 600 acres for $5000 in Purisima, CA (near Half Moon Bay). They sold it for $20,000 ten years later. Andrew and Martha traveled to Carpinteria by wagon in 1868 where he bought 400 acres in Carpinteria from Matthew Biggs and his wife (Arrellanes grant) for $16/acre, paid for with gold. Andrew and Martha had ten children:

An avocado rancher, sailor and local historian, Lawry grew up in Carpinteria on the family ranch where his Bailard ancestors built the original homestead plot, and he continued to cultivate tomatoes, lemons, avocados, cherimoyas and more on the same family land and other Carpinteria acreage for over 70 years. His childhood was filled with outdoor adventures, hiking and hunting in the Carpinteria backcountry, and exploring and fishing around the Channel Islands on family boat trips. As a young man, he studied business at Stanford University, before enlisting in the Army Air Corps in 1943. His military service took him to Okinawa after training in Wisconsin, where he met his first wife, and mother of his children, Kathryn “Kay” Miller Bailard.

After World War II ended, the young couple returned to the family’s roots in California and Lawry decided to join his father, Neil, farming in Carpinteria. He and Kay set up housekeeping and got to work. Lawry and Kay started their own family, with Fred born first, closely followed by Mary and Jim, with David arriving a few years later. Lawry expanded the family’s farm operations from tomatoes, lemons and avocados, to include pumpkins, eventually running a very successful u-pick pumpkin stand on Padaro Lane that helped put all four of his children through college. While they were always expected to help out on the farm, Lawry encouraged his children to follow their own paths in life.

While an avocado rancher never really retires because there’s always work to do on the farm, Lawry eventually brought his daughter and son-in-law into the family farm operation, gradually turning his attention fulltime to his true passions: boat building, sailing, travelling and recounting stories from Carpinteria’s early days.

In 1994, he completed the Kathryn B, a replica Monterey fishing boat that he built himself, and also made various smaller watercraft and dinghies. All his life, some of his happiest days were spent on the Pacific Ocean, rowing in Santa Barbara Harbor, trolling for fish off Santa Cruz Island, or sailing over to the Channel Islands for weeklong stays in the harbors and coves there. Away from the constant stress of managing a farm, Lawry relaxed and enjoyed his temporary role of ship captain.

Beyond ocean pursuits, Lawry served as a board member of the Carpinteria Fire District and the Johnson Fruit Company and then took time at the end of his life to volunteer for various organizations including the Santa Barbara Maritime Museum and the Carpinteria Valley Historical Museum. His impressive memory, keen intellect and deep knowledge of Carpinteria lore allowed him to act as a living history expert, advising anyone interested in documenting local moments from the past.

Beyond volunteering, he filled his later days with travel to faraway climes, from Africa to Ireland, and Egypt to South America. While he valued this time away, he always felt at home in Carpinteria, back on the ranch, surrounded by his family.

In 1993, after his first wife Kay died, he reconnected with a childhood acquaintance, Joan Rock, whose parents were friends with his parents. The two married, uniting two large clans, and joining members of the Bailard, Hunziker, Rock, Mirov, Goodman-Smith and Kroeber families.

From then on, Lawry constantly surrounded himself with his relatives at home on the ranch, or at the house at Carpinteria beach. Although his travels became confined to Santa Barbara County in his final years, he got to journey vicariously through his family members, who always stopped by to say hello, hear a great anecdote or two and to catch him up on their life beyond the local environs.