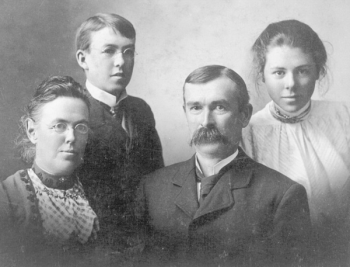 The Baker family: Charlotte and Frederick and
their children Robert H. and Mary C. Baker

BAKER, Frederick (1848-1938) was born in Norwalk, Ohio on January 29, 1854. He attended Cornell University, New York where he initially studied engineering, but switched to natural history. He earned a civil engineering degree from Cornell University in 1870, then joined a four-year scientific expedition in Central and South America.

Returning to the United States, he earned an M.D. degree from the University of Michigan in 1880.

Baker was driving force behind some of modern San Diego's greatest treasures: the San Diego Zoo, Scripps Institution of Oceanography and San Diego State University. He served on San Diego City Council and on school boards. He collected seashells from all over the world. In fact, he was a world-renowned conchologist, one who studies shells. His collection can be seen at the San Diego Museum of Natural History.

Baker married Dr. Charlotte Lebreton Johnson. She was a physician in an era when few women went to college, only 30 years after the first woman graduated from medical school in America. The Bakers practiced medicine in Ohio and New Mexico before settling in San Diego in 1888.

Los Coronados. “Since this was written I have been informed by Dr. F. Baker, of San Diego, that he has taken the following reptiles on these islands...” [Van Denburgh, John. The Reptiles and Amphobians of the Islands of the Pacific Coast of North America from the Farallons to Cape San Lucas and the Revilla Gigedos (Coast Island Reptiles). Proc. Cal. Acad. Sci. 3rd Series. Zoology. IV(1):18.