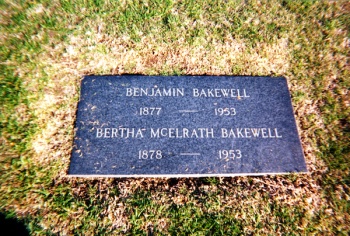 In 1905 Dr. Bakewell was married to Bertha McElrath (1878-1953), the sister of Santa Cruz Island Company employee, Clifford McElrath. They had four daughters:

Dr. Bakewell died at age 75 on September 3, 1953. He and his wife are both buried in the Santa Barbara Cemetery.

October 29, 1915 [SBMP]: “Charles Hanson, one of the better fishermen operating in island waters for several years past, was brought over from the islands yesterday suffering from a wound inflicted by a thrust of an albacore’s fin, which is mounted with a set of needle-like thorns that are sometimes coated with a poisonous film. Mr. Hanson was stung severely in one of the hands by this unfortunate variety of contact, with the result that he has a severe case of blood poisoning with which to wrestle. Dr. Bakewell has charge of the case.”

January 27, 1921 [SBMP]: “Five employees of the Santa Cruz Island Company with two others were brought to the city Tuesday night for medical treatment appear to be have sleeping sickness, Dr. C. B. Nagelman, who examined them, said last night. The men have been in a state of coma for five days, according to Dr. E. J. Boeseke, who also examined the men and confirmed Dr. Nagelman’s diagnosis. A sixth member of the party, Joe Bermudez, is being treated at his home, 719 East Haley Street. The other, Ike Newton of 614 Canal Street, is at Cottage Hospital. According to Dr. High Frisdell, Newton is suffering from food poisoning. Dr. Benjamin Bakewell who also examined Newton, said that the men may have been poisoned from food, but he would not care to say absolutely that was the trouble. The five who were taken to the County Hospital last night were Frank Ricci, Alexander Merlo, John Diana, Emanuel Lamont and Fred Giaconutti. The attending physicians said that they believe the men have sleeping sickness, brought on from existing for three months on meat. All are in a weakened condition. The men were employed on Santa Cruz Island in the construction of a wharf.”

September 4, 1953 [SBMP]: “Dr. Benjamin Bakewell, 75, obstetrician and gynecologist who had delivered countless babies since beginning practice here in 1906, dies at 5:15 A.M. yesterday at a local hospital. He had been in the hospital for three weeks and was believed improving when he succumbed to a heart condition...”