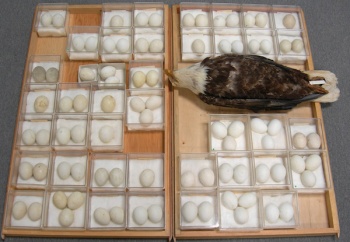 BALD EAGLES (Haliaeetus leucocephalus) have been the national bird of the U.S. since 1782, symbolizing freedom, power and majesty. “Bald” refers to the adult bird’s piebald (black and white) plumage. Adults have a wingspan of seven to eight feet and weight fourteen or fifteen pounds. Eagles typically lay two eggs at a time, but usually only one chick survives. Lifespan is more than 30 years in the wild. Although bald eagles are primarily carrion and fish eaters, on the Channel Islands they have been reported eating foxes, lambs, piglets, cats and rabbits. Bald eagles are also known to hunt young sea otters by listening for the noises they make while feeding in kelp beds. Bald eagles formerly nested on every California Channel Island. By the end of World War II, the island populations of bald eagles had become greatly reduced, and in 1940 the Bald Eagle Protection Act prohibited shooting or otherwise harming the birds in the United States. By the 1960s Bald Eagles were no longer found on the California Channel Islands.

Increasing levels of DDT in the environment are thought to have caused egg fragility in the remaining population, and by the late 1960s the birds were no longer present on the Channel Islands. The chemical was banned by Congress in 1972. The last nesting record on the Channel Islands was in 1950.

In 1980 a program to reintroduce bald eagles to the Channel Islands began on Santa Catalina Island, followed by reintroductions to Santa Cruz Island over a five year period beginning in 2002, and funded by the largest maker of DDT, Montrose Chemical Company. During these five years, 61 Bald Eagles were reintroduced onto the northern Channel Islands, beginning with the release of twelve young birds in 2002.

Research by Marla Daily has located 75 sets of Bald Eagle eggs, 10 skins and 6 skeletons in museums that were collected on the Channel Islands by a number of oologists and amateur collectors: