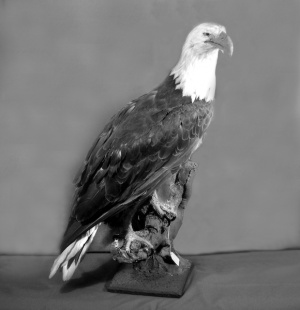 1903 Anacapa Island: “On the 4th of September, 1903, I was landed from a yacht onto Ana Capa Island... My stay on the Island was limited to less than an hour; but besides that I was permitted to coast along nearly the whole length of the island in a small boat....Besides the usual seabirds of the region I saw the following: One Bald Eagle (Haliæetus leucocephalus) flying...”
Grinnell, Joseph Some Birds of Ana Capa Island The Condor 10(3):130, May-June 1908

September 4, 1903: “Some birds of Anacapa Island. On the 4th of September, I was landed from a yacht onto Anacapa Island… Besides the usual sea birds of the region I saw the following: one Bald Eagle (Haliaetus leucocephalus) flying… J[oseph] Grinnell, Pasadena, California.” [Condor 10:3 (130) May-June 1908].

June 14, 1911 [SBMP]: “John Sheridan is supposed to be doing a lonesome turn on Anacapa Island these days, but the latest wireless dispatch from that station is to the effect that he is chasing the eagles from Bay Webster’s patch of lambs, and when not busy at that, has a commission to herd abalones, which are swarming at this season of the year. John was a member of Captain Webster’s party Saturday, but failed to get down to the landing in time for the trip home Sunday evening. He will doubtless be ready for the return trip on the next visit Captain Webster makes to his wave-washed domain.”