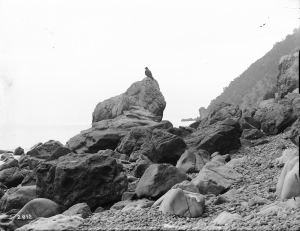 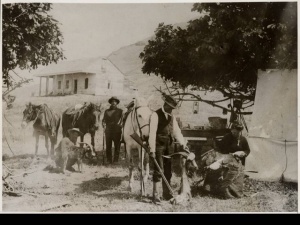 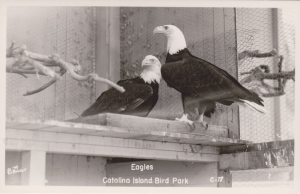 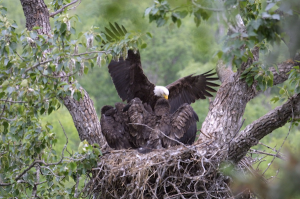 1905-1906 Santa Catalina Island: “Haliaeetus leucocephalus. Bald Eagle. A number of bald eagles were seen circling about the cliffs. ” [“These notes are the result of two brief sojourns on Santa Catalina Island in the month of April, eight days being spent in 1905, and five in 1906. Fortunately both trips were made after wet seasons; the hills were carpeted with grass, flowers and insects were abundant.”]
Richardson, Charles H., Jr. Spring Notes from Santa Catalina Island The Condor 10(2):65-68, March 1908

1842: In the spring of 1841 William Gambel (1823-1849) headed to the west coast via Independence, Missouri, and then by caravan to Santa Fe, where he arrived in July. Gambel joined the Rowland-Workman party, which followed the Old Spanish Trail into the Los Angeles basin. In mid-February 1842 and again in April 1842, Gambel visited Santa Catalina Island, where he observed both Bald Eagles and Osprey. At the time, the island was still owned by the Mexican government.

February 1843: The earliest historical notice of a bald eagle on the California Channel Islands was recorded by William Gambel on his trip to Santa Catalina Island in February, 1843 (Gambel 1846); he reported bald eagles nesting on “precipitous cliffs.”

1861/1863: James G. Cooper (1870a, 1870b) reported bald eagles as being common and numerous along inaccessible cliffs during his visits to Santa Catalina Island in 1861 and 1863. Cooper noted (1870a) that thirty bald eagles were seen at the north end of Santa Catalina Island on July 9, 1873. [Cooper, James Graham 1870a Ornithology, Vol 1: Land Birds. Geological Survey of California, S. F. Baird, ed. University Press: Welch, Bigelow & Co., Cambridge; 1870b The Fauna of California and its Geographical Distribution. Proceedings of the Academy of Natural Sciences 4:61– 81.]

July 28, 1882 [LAT]: “Catalina Island… Well, the day wore away and so did our patience, and we returned to our boat and took an inventory of the day’s spoils: four empty stomachs, eight excessively tired limbs, two abalone shells, one sea gull, two goat horns, one snipe, two manzanita sticks and two eagles…”

July 30, 1886 [KEJI]: “My trip this summer to Santa Catalina Island… One of our party shot a bald eagle which weighed 18 pounds and had claws two inches long. He measured from tip to tip of each wing 5 feet 2 inches.”

April 18, 1897 [NYT]: “California Island life… A story of some foxes without tails, cunning ravens with a fondness for chickens, bald eagles in plenty… I was surprised by the number of bald eagles at Santa Catalina Island, counting fifty during a trip around the island. They build in the inaccessible rocks along the shore, and fish after the habit of the great sea eagle…”

December 5, 1897 [NYT]: “…On the island of Santa Cruz many of the birds familiar on the mainland can be found. The bald eagle could be seen on all these islands, over fifty being counted in circling the island of Santa Catalina, and doubtless there were many others. Their nests were built on the summits of isolated crags, difficult of access…”

March 26, 1902 [LAT/SCat]: “Avalon. ‘Uncle John’ Nestell, who spends nearly all the daylight hours in fishing, with his skipper George Farnsworth, was trolling for tuna just off Jewfish Point when an eagle, one of a pair which have a nest nigh up on the side of the cliff which rises nearly a thousand feet there, mistaking his bait for a floating fish, swooped down and seizing it in its talons, started for the nest. Uncle John’s reel began screaming to beat the eagle’s shriek, and higher and higher flew the big bird, until the 900-feet of line was run out, and then tugging desperately the hold of the hook was torn out of the fish and the line dropped back into the water.”

1910: “The commonest bird of the island is the bald eagle, which appears to thrive and is found everywhere. It occasionally flies out to sea after dead fish, pouncing down upon them, and snatching at them with its powerful claws. This bird (Haliaetus leucocephalus) could be seen at any time near our camp, one or two roosting near us every day at our canon or beach, perched on the rocks within easy gunshot. A large female, injured in some way, was brought into camp after an exciting chase and later sent to the zoological garden at Los Angeles.” [Holder, Charles F. The Channel Islands of California 1910:157].

January 25, 1933 [TI/Avalon]: “… Now, passing the light at Long Point… A bald eagle settles on the most inaccessible crag of the palisades.”

May 3, 1933 [TI/Avalon]: “… Catalina residents should appreciate the privilege of seeing this native bird at home on the island. A pair has nested for several years on the cliffs near Seal Rocks and may often be seen diving for fish which is their principal food. The sight of a Bald Eagle hunting, and the sound of rushing wings through the air as it dives is an experience a naturalist never forgets…”