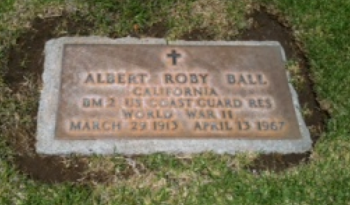 April 14, 1967 [SBNP]: “Albert Roby Ball, 54, a local commercial fisherman known by his friends as “McGee,” died yesterday at the Veterans Administration Hospital at Long Beach. He had been ill more than a year. A native of Arizona, he was born March 29, 1913, the son of Mrs. Bertha E. Ball, now of Oak View, Ventura County, and the late George Ball who died here in 1956. Mr. Ball came here in 1929 and was self-employed as a fisherman, owning his own boat, He also did some gardening when he was not fishing. He served as a boatswain’s mate with the Coast Guard during World War II. Surviving, in addition to his mother, are a daughter, Mary E. Ball of Goleta Valley, a brother, Walter Ball of Oak View. Another brother, William Ball of Compton, died last December.”