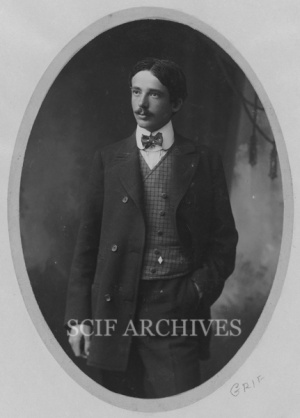 Ornithologist and oologist by avocation, Bancroft and his namesake son had one of the largest private egg collections in the country before World War II. He became a member of the Cooper Ornithological Club in 1920. He made collecting trips to San Clemente Island in February and March of 1923, In February 1923 he collected on San Clemente Island, including five sets of bald eagle eggs. FIX

BANCROFT, Griffing “Born at New Haven, Connecticut, January 21, 1879. An active oologist and ornithologist of San Diego and member of the Cooper Ornithological Club since 1920. In recognition of his interest in the birds of southern and Lower California, Huey has recently named a southern form of Yellow-crowned Night Heron, Nyctanassa violacea bancrofti, in his honor .”

May 5, 1955 [WP]: “May 4. La Jolla, CA. Griffing Bancroft, 76, naturalist, author and attorney and a member of one of California’s most noted families, died at his home here today. A native of New Haven, Connecticut, he was the son of Hubert Howe Bancroft who came to San Francisco during the ’49 gold rush… Griffing Bancroft authored several books including a novel about the Japanese migration to California… He married his first wife, the former Ethel Works, daughter of United States Senator John D. Works, who now lives in New York, in 1901. She is the mother of his three children. They were divorced and Bancroft married Margaret Wood in 1917. In addition to his widow other survivors include three children, Griffing Jr., CBS radio news reporter and commentator in Washington, D. C., Hubert Howe with the Voice of America in Washington, and Mrs. Louis Molloy, New York City.”