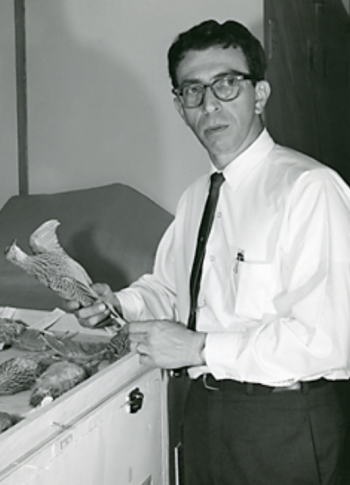 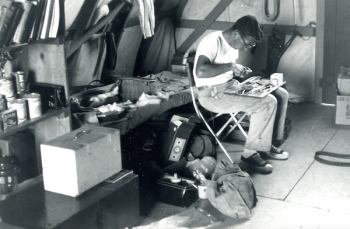 BANKS, Richard Charles (b. 1931) was born in Steubenville, Ohio, on April 19, 1931. His father enjoyed the outdoors and the family often went on drives in the country and walks in the woods. In the early 1940s, a high school biology teacher in nearby Amsterdam, Ohio, began leading bird walks locally and collected birds and other wildlife. Dick was fascinated with the teacher’s collection of specimens from the Amazon basin. Dick’s father, a construction engineer in a steel mill, became an excellent amateur naturalist and a member of the Wilson Ornithological Society. Dick met many professional ornithologists and conservationists through his dad.

Dick was an active birder and Eagle Scout in high school. He was graduated in 1949 and went to Ohio State University to major in wildlife conservation. Dick was in the ROTC at Ohio State, and shortly after graduation in 1953 went on active duty with the Army, serving about a year in post-war Korea. His Reserve Officer Training Corps training was in artillery, but bad eyes kept him out of that branch and his biological training qualified him for the Medical Service Corps in a preventive medicine unit in Korea. Dick collected some birds and herps in Korea.

Returning from the military in 1955, Dick entered graduate school at the University of California, Berkeley, and obtained a position as curatorial assistant in birds in the Museum of Vertebrate Zoology. He studied white-crowned sparrows, receiving his MA and PhD degrees under the guidance of Alden H. Miller. In Dick’s last year or so at Berkeley on a trip to Cerralvo Island in the Gulf of California, he noted some interesting differences in some of the birds he collected, and applied for and received a small National Science Foundation grant to continue studies on that island. He named three subspecies of birds from the island. His interest in Baja California led to the offer of a job as curator of birds and mammals at the San Diego Museum of Natural History in 1962.

In 1966, Dick was appointed chief of the bird section of the Bird and Mammal Labs of the Fish and Wildlife Service in the National Museum of Natural History. He became director of the labs after the retirement of Richard H. Manville. Except for a brief stint as a staff specialist in the Fish and Wildlife Service Division of Wildlife Research, he has continued to serve as a curator of the Biological Survey, U.S. Geological Survey, Biological Resources Division, portion of the U.S. National Museum bird collection. Dick officially retired in 2005 but maintained an office and remained active at the Museum.

In 1967, Dick married Gladys Sparks, known to most as “Chuck,” whom he met in San Diego. They have two sons, Randy and David. Dick was introduced to the Washington Biologists’ Field Club in 1966 and was elected to membership in 1967. He served on the Board of Managers several times, on the membership and research committees, chaired the centennial committee, and was Club president from 1990 to 1993.