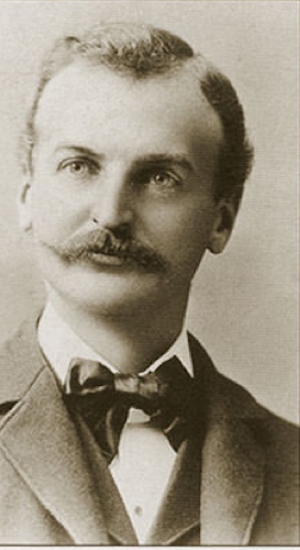 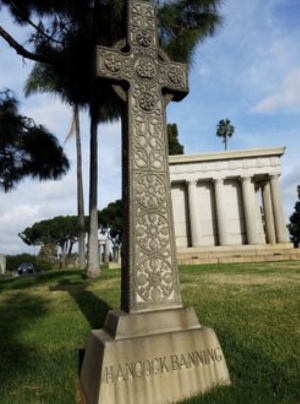 BANNING, Hancock (1865-1925), third and last surviving son born to Phineas and Rebecca Banning, named in honor of Civil War General Winfield Scott Hancock, friend of Phineas Banning. He acquired his Master Mariner license at age 21. In 1890, two years before he and his brothers acquired Santa Catalina Island, he married Anne Ophelia Smith. In 1895 Hancock Banning built his home on the beach at the mouth of Descanso Canyon where he and his family spent summers. This house was later moved to make way for construction of the Hotel St. Catherine, which opened in 1918.

Hancock Banning died in Los Angeles on August 7, 1925 at age 60. Hancock Banning served on the board of the Santa Catalina Island Company for 25 years.

November 16, 1890 [LAT]: “Wednesday evening at 8 o’clock Miss Anna O. Smith and Hancock Banning were united in marriage at St. Paul’s Church. It was one of the most fashionable and largest church weddings that has ever taken place in this city… First came the ushers in pairs: H. W. Latham… G. Patton… About 500 were present…”

January 11, 1893 [LAT/SCat]: “The Bannings will have new cottages next summer for their private use. Captain J. B. Banning will have his cottage in the first canyon north of Avalon Bay, and Hancock Banning already has begun work for his cottage in the next canyon above. The site of his cottage will be on a point of rocks jutting out into the sea, and its foundation will be about twenty-five feet above high water…”

March 1, 1896 [SFC]: “Los Angeles, February 29. Collector Gaffey, Deputy Harkness and Major Harry Patton left this morning on the steamer Hermosa for San Clemente Island on a hunt for smugglers. Collector Gaffey heard some days ago that an attempt would be made to land a number of smuggled Chinese and opium on the island from an Asiatic steamer. It was reported that a San Francisco yacht was hovering about the island waiting for a chance to take the coolies ashore. It was said that the yacht had a large crew on board, and some reports had it that a Maxim gun was seen glittering back of the rail. Gaffey’s force consisted of eight men, all well armed, for, as a matter of fact, the trip is not at all a joke. The success of the smugglers in landing their Chinese means a profit of upward of $100,000, as there are supposed to be about 100 coolies as well as a large amount of opium. Mr. Gaffey was informed that the San Francisco men were a determined lot, and he was warned to take no chances with them if they offered the least resistance. The expedition will, on arriving in Catalina, be transferred to Hancock Banning’s yacht, La Paloma, and will sail at once for San Clemente.”

September 13, 1901 [LAT/SCat]: “Avalon. Captain Hancock Banning of the yacht La Paloma, with N. W. Bell and W. R. Staats, who have been cruising about for three weeks, returned to Avalon Bay yesterday afternoon, and left for San Pedro this morning, where their cruise will come to an end. They visited San Diego and Santa Barbara, and spent some days on Santa Cruz Island, and for some days have been lying at in Catalina Harbor at the Isthmus.”

August 31, 1903 [SBI]: “Hancock Banning, one of the owners of Catalina Island, and a party of friends from the south, who have been spending a few days in Santa Barbara, returned yesterday to their southern homes. During their visit here, the party took a trip to Santa Cruz Island, leaving early Saturday morning and returning in the evening. The cruise was made in the Banning yacht Cricket and the Sinclair yacht Lurline… Mr. Banning declared that Santa Cruz, in its general features, was quite equal to Catalina and he predicted a great future of the place as a resort when once its improvement is undertaken…”

February 16, 1904 [LAT/SP]: “Another vessel has been added to the fleet of the Banning Company… The Cabrillo, in all her appointments, is a beautiful vessel… The launching of the Cabrillo was witnessed by a large crowd, including many ladies and officials of the Wilmington Transportation Company. Among those present were Captain J. B. Banning, Hancock Banning, William Banning, Reese Llewellyn of the Llewellyn Iron Works, Joseph Schoder of the Union Metal and Hardware Company, Edward Maher, superintendent, and Andrew Young, master machinist of the Banning Company.”

August 7, 1904 [LAT/SCat]: “Avalon. Mrs. Hancock Banning is entertaining a house party at her summer home in Descanso Canyon, the guests having arrived this morning. They were escorted by Captain Hancock Banning in a special car on the Southern Pacific Railroad, connecting up with the Cabrillo at San Pedro…”

August 11, 1904 [LAT/SCat]: “Avalon. Captain Hancock Banning, with the Cricket, this morning took a party of twenty-four personal friends… to the Isthmus…”

August 30, 1904 [LAT/SCat]: “Avalon. Sold? Catalina Island has been sold? ‘Certainly not! Absolutely nothing in it. The island has not been sold — is not for sale,’ said Hancock Banning.”

September 18, 1904 [LAT/SCat]: “Avalon. Music is seldom heard to better advantage than last night when the Catalina band gave a serenade at the summer home of Mr. and Mrs. Hancock Banning at Descanso Canyon. It is the custom of the band at the close of each season to give a serenade at each of the Banning homes… An interesting feature was the appearance of little Hancock Banning on the veranda. In the name of his mother and in the absence of his father he made a speech thanking the musicians. Later the visitors were invited to refreshments.”

June 28, 1905 [LAT]: “A jolly party returned Monday from a trip up the coast in the Bannings’ smart little yacht, Cricket. They cruised up to Santa Barbara and over to Santa Cruz, where they spent the night falling in with the Luraline and a party of rovers from the Catalina Island Yacht Club. The members of the party were: William Bell, Walter S. Newhall, Frank H. Edwards, Eugene V. Baker, Allan Hancock and Hancock Banning.”

April 21, 1914 [TI/Avalon]: “Hancock Banning and a party of friends, on the yacht Cricket, visited Avalon Friday. After a trip to the Isthmus, the party returned to San Pedro.”

September 7, 1915 [TI/Avalon]: “Mr. Hancock Banning and family have returned to their Wilmington home.”

January 1, 1918 [TI/Avalon]: “Cadet George Banning, son of Hancock Banning, who has been attending the military aviation school at the University of California, Berkley, was an Avalon visitor one day last week.”

February 5, 1918 [TI/Avalon]: “The latest word from Lieutenant George Banning, who recently underwent a serious operation at the United States military hospital at San Antonio, Texas, was to the effect that he was well started on the road to recovery. His father, Mr. Hancock Banning, spent several days with him, and Mrs. Banning still visits him daily.”

August 8, 1925 [LAT]: “Banning rites Monday. Pioneer succumbs to death after operation. Son of Wilmington founder, Catalina owner. Survived by widow, two sons and a daughter… Mr. Banning was the son of General Phineas Banning, founder of Wilmington, and was one of the Banning family whose name is prominently connected with Catalina Island and Los Angeles harbor development and transportation lines between the two. For more than twenty-five years he has been vice-president of the Santa Catalina Island Company, consisting of himself and brothers, William Banning and Joseph B. Banning, who owned the famous isle. It was disposed of by them in 1919 to William Wrigley, Jr., Chicago capitalist, for approximately $2,000,000… The brothers built the Hotel St. Catherine, Avalon, and operated the steamers Hermosa and Cabrillo, which plied between the island and mainland. Mr. Banning was born May 12, 1865, in Banning Place, Wilmington, and it remained his residence to the last. It has known five generations of the Banning family, and was built by General Banning after he had come here from Wilmington, Delaware, later to found the new town naming it after his old home… Born with a love of the sea and trained on his father’s ships, he became a United States master Mariner at 21 years of age… His Judge and La Paloma vied with the fastest vessels of the Pacific Coast… Mr. Banning left a widow, two sons and a daughter. The widow is Mrs. Anne Ophelia Smith Banning, daughter of former Appellate Judge George H. Smith. The two were married in November 1890… The sons are Hancock Banning Jr., South Pasadena, and Hugh Banning of Berkeley. The daughter is Mrs. John C. Macfarland of South Pasadena…”

August 10, 1925 [LAT]: “Last rights for Banning here today. Catalina delegation will attend services conducted for island pioneer. Funeral services for Hancock Banning, who was active in the early development of Santa Catalina Island into a pleasure resort, and who died Thursday, will be held in Los Angeles today at 2 p.m. Flags on the island were yesterday flown at half-mast in the builder's memory and a delegation of island residents will attend the funeral, coming by special boat. They will be headed by D. M. Renton, general manager of Catalina Island. Renton and City Manager A. B. Waddingham have issued orders that all traffic be halted in Avalon for five minutes during the funeral. Next Sunday evening, at the Avalon Congregational Church, a special Hancock Banning memorial service will be conducted by Rev. La Rue C. Watson. Tonight Porter's Catalina Marine band will play a memorial program at the Greek Amphitheater in tribute to the pioneer.”

August 11, 1925 [LAT]: “Final tributes paid to Banning. Pioneer capitalist buried from St. Paul's. Flags at Avalon flown at half mast. Favorite hymns added to regular service. Los Angeles yesterday at St. Paul's Protestant Cathedral paid its final tribute to Hancock Banning, clubman, capitalist and scion of one of the oldest Los Angeles county families, who died last Friday at Good Samaritan Hospital. Simultaneously with the funeral services here, memorial services were conducted at Wilmington and Avalon, while all flags on Catalina Island, of which Mr. Banning was one of the former owners, were at half mast. The regular Episcopal funeral services were conducted by Bishop Johnson, assisted by Rev. Thomas P. Swift of St. John's Church, Wilmington, an old friend of Mr. Banning. The singing of "Nearer My God to Thee." Mr. Banning's favorite hymn, and Stevenson's "Requiem" were the only departures from the usual service. Hundreds of beautiful floral pieces were banked in the choir of the cathedral, tributes to the memory of the pioneer capitalist from personal friends and organizations with which his business life had been identified. Many men and women from Avalon and Wilmington attended the services. Active pallbearers were Joseph B. Banning, Jr., William P. Banning, Arvin H. Brown, Eltinge T. Brown, Hobart G. Brown and Douglas Van Dyke. Following the cathedral services, the body of Mr. Banning was taken by Pierce Brothers to the Inglewood Park Cemetery, where burial services, with only members of the family in attendance, were conducted by Bishop Johnson.”