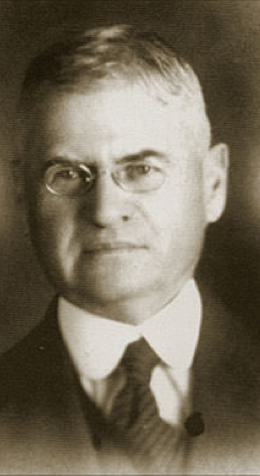 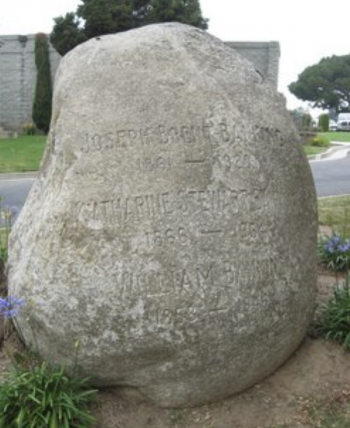 BANNING, Joseph Brent (1861-1920), second son born to Phineas and Rebecca Banning. Joseph Banning acted as onsite island owner/manager after he and his brothers purchased Santa Catalina Island in 1892. He built a cottage in Avalon where he and his wife and family lived much of the year. In 1909 he built a home at the Isthmus on Santa Catalina Island with commanding views of Two Harbors. Today this historic house serves as the Banning House Lodge.

J. B. Banning was an avid photographer and he chronicled much of the Bannings' lives in Wilmington and on Catalina. He had finished law school, but never practiced. The family nicknamed him "The Judge."

January 11, 1893 [LAT/SCat]: “Avalon is preparing for a lively season the coming summer… The Bannings will have new cottages next summer for their private use. Captain J. B. Banning will have his cottage in the first canyon north of Avalon Bay, and Hancock Banning has already begun work for his cottage in the next canyon above…”

August 28, 1901 [LAT/SCat]: “J. B. Banning and family and the family of George S. Patton went over on a special boat this morning to prepare for their tally-ho trip to the northern part of the State.”

January 29, 1902 [LAT]: “Captain F. P. Whittley, owner of the yacht Nellie, which plied about the waters between San Pedro and Santa Catalina Island, and one of the best known men on the coast, died at his residence in this city yesterday. Forty-eight years ago, when he was but 6 years old, Captain Whittley came from Ensenada with his parents, and landed on the island, which ever since has been his home... ‘He was a man of the strictest integrity and honesty in all his dealings,’ said J. B. Banning, last night. ‘He was very popular, being a favorite with everybody…”

February 16, 1904 [LAT/SP]: “Another vessel has been added to the fleet of the Banning Company… The Cabrillo, in all her appointments, is a beautiful vessel… The launching of the Cabrillo was witnessed by a large crowd, including many ladies and officials of the Wilmington Transportation Company. Among those present were Captain J. B. Banning, Hancock Banning, William Banning, Reese Llewellyn of the Llewellyn Iron Works, Joseph Schoder of the Union Metal and Hardware Company, Edward Maher, superintendent, and Andrew Young, master machinist of the Banning Company.”

January 2, 1908 [LAT/SCat]: “Avalon. J. B. Banning, Jr., who, with two of his student friends, has been spending several days shooting at the Isthmus, returned to the mainland today in the launch Cricket.”

July 27, 1915 [TI/Avalon]: “Mr. and Mrs. J. B. Banning and family arrived Saturday, and left for their beautiful summer home, which overlooks Isthmus harbor. The family are planning to spend the summer on the island.”

April 18, 1916 [TI/Avalon]: “Mr. and Mrs. J. B. Banning and family have returned to the mainland. Mr. Banning’s health is considerably improved.”

November 1, 1920 [LAT]: “Pioneer's condition critical. Joseph Banning, leader in harbor and Catalina development, is very ill. Joseph B. Banning of 947 Westlake Avenue, noted for his share in developing Los Angeles Harbor district and Santa Catalina Island, suffered an attack of apoplexy yesterday and a considerable anxiety is felt for him. The family is hopeful, but state Mr. Banning is very ill. Dr. R. Wernigk, the physician in attendance, said last night that his patient suffered a cerebral hemorrhage Saturday and that change either for better or worse may be expected today. Mr. Banning is slightly less than 60 years of age. He is one of the Banning brothers who opened up Catalina Island and conducted navigation activities at Los Angeles Harbor for many years. He was a member of the Banning Company until its interests were sold to William Wrigley, Jr. a few months ago. Mr. Banning has a wife, two sons and a daughter residing here.”

November 5, 1920 [LAT]: “Joseph B. Banning taken by death. Joseph Brent Banning, for many years one of the leaders in the transportation world of Southern California, died early this morning at his residence, 847 Westlake avenue, Los Angeles. He suffered an attack of apoplexy last Sunday. Mr. Banning was a son of the late Gen. Phineas Banning and Mrs. Rebecca (Sandford) Banning. He was born in Wilmington, Aug. 12, 1861. He early became identified with his father's large interests at what is now Los Angeles Harbor. He was first employed in farming and sheep raising and then became manager of the grain and lumber business. Afterward he was made first vice-president of the famous Banning Company, vice-president and treasurer of the Wilmington Transportation Company and first vice-president of the Santa Catalina Island Company. When the Bannings disposed of their harbor business to the Wrigley interests, Joseph Banning practically retired from business. Joseph Banning was a member of a number of clubs, including the California, Craggs Country, Lomita Gun Club and others. He also belonged to the Benevolent and Protective Order of Elks. He leaves a widow, two sons and a daughter residing here.”