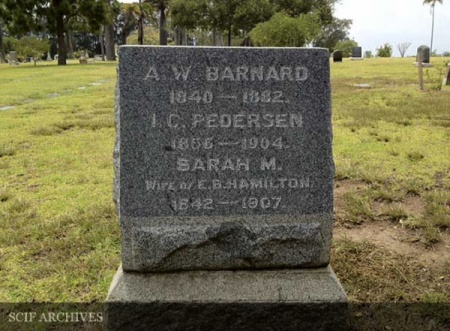 A. W. Barnard and older son, Cyrus, became professional pot-hunters. They were apparently taught the profession by Reverend Stephen Bowers during an extended trip they took together to San Miguel Island in 1877. The Barnards also collected Indian artifacts on Santa Cruz and San Nicolas islands. In the early 1880s, the Barnards sold thousands of Indian relics from the California Channel Islands to anthropological collector, James Terry of the American Museum of Natural History, New York.

A. W. Barnard died on April 13, 1882 at the relatively young age of 42. Fourteen years later, his son, Cyrus, allegedly committed a double murder.

Both Cyrus Barnard and his father, A. W. Barnard, are buried in Santa Barbara Cemetery.

July 24. “We got an early start this morning, and Mr. Barnard and I went to explore the northern portion of the island…”

July 27. “Mr. Barnard and I went to the west end of the island today…”

July 28. “Mr. and Mrs. Barnard went to the eastern end of the island for relics and returned at noon with discs, arrowheads, etc…”

July 30. “Barnard, Mills, Hayden and I went to the west end of the island today. Barnard and Hayden took their guns to shoot sea lions…”

August 30, 1877. “Sent Joe and Barnard across to the ranch house with horses and packs while I walked up the coast… In crossing over Joe and Barnard lassoed a wild boar…”

October 15, 1879. “Started with DeMoss, Rev. Roller Branch, J. L. Bewster, and A. Barnard for San Nicolas Island. I had chartered the sloop Hattie of San Pedro to take us over…”

October 29, 1879. “DeMoss, Barnard and I went to the west end of the island this morning, finding mortars, pestels, discs, serpentine specimens, etc…”

October 31, 1879. “This day has been delightful, though too warm for comfort a portion of the time. DeMoss, Barnard and I went to the west end today, finding many good specimens…”

November 2, 1879. “This is the eighteenth day on the island… DeMoss, Barnard and I went out to bring in specimens… I carried four or five loads and Barnard three… Barnard and I brought in the last load about 2:00 P.M… At the top of the hill Barnard and I found a prostrated cross made from the spar of a ship and and a board nailed across…”

June 14, 1881 [SBDP]: “The schooner Convoy, Captain Mills, sailed for Anacapa Island this forenoon. Mr. S. [A.] W. Barnard took passage on her to San Nicolas Island where he goes to search for Indian relics.”

July 12, 1896 [SBMP]: “The suspicion leading to the attempted arrest of Cyrus Barnard for the murder of the Richardsons, was based on circumstances that seemed almost conclusive as to his guilt…”