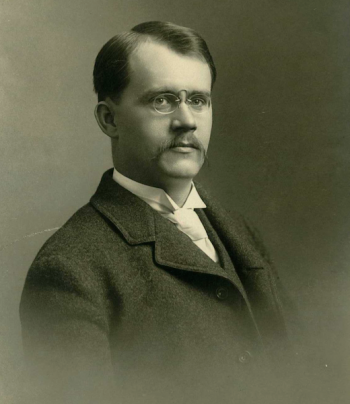 BARNHART, John Hendley (1871-1949) was born in Brooklyn, New York to John Wesley Barnhart and Emma Miller Barnhart. He attended Wesleyan University in Middletown, Connecticut, receiving an A.B. in 1892 and an A.M. the following year. In 1896 he was graduated from Columbia University College of Physicians and Surgeons receiving an M.D., though he never practiced medicine. His decision not to practice medicine was apparently made possible by substantial private income.

Barnhart became known for his biographies of botanists and exposure of biographical hoaxes. The six-volume Appleton's Cyclopedia of American Biography was published between 1887 and 1889 and was one of the first and most definitive works of its kind published in America. It contains biographical information about thousands of people (some famous, some more obscure) in American history. It was hailed as a valuable source of information for both scholars and students alike. But thirty years after the Cyclopedia's initial publication, questions began to be raised about its reliability. The botanist Dr. John Hendley Barnhart published a brief article in the Journal of the New York Botanical Garden suggesting that some of the Cyclopedia's biographical sketches might be fictitious. He had specific doubts about fourteen botanists. He had never heard of these people, nor could he find references to them anywhere else.

Barnhart worked at the New York Botanical Garden from 1903-1942. In 1916 he became one of two editors of their journal, Addisonia (which ceased publication in 1964).

In 1897 Barnhart married Emma Gertrude Platt in Jessamine, Florida. He died on November 11, 1949, and is buried in Cedar Hill Cemetery, Newburgh, New York.

According to Millspaugh & Nuttall, “Collected in the vicinity of Avalon, Aug. 4, 1901. The few specimens (about 12) we have been allowed to examine in his private herbarium.”