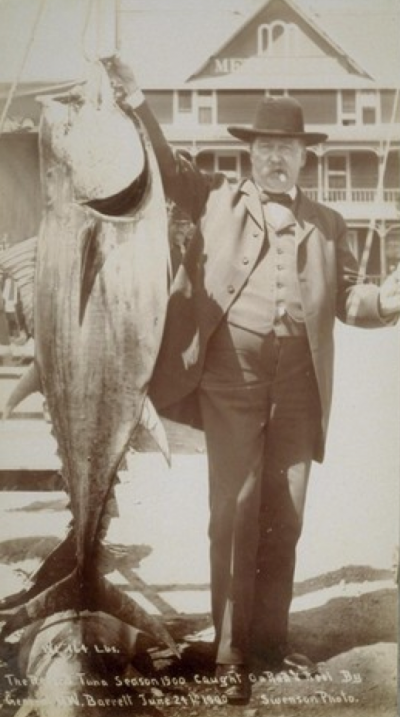 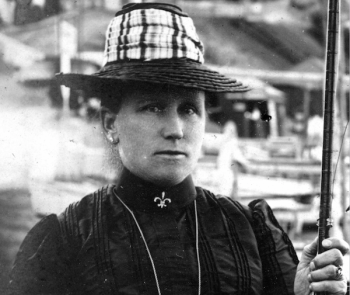 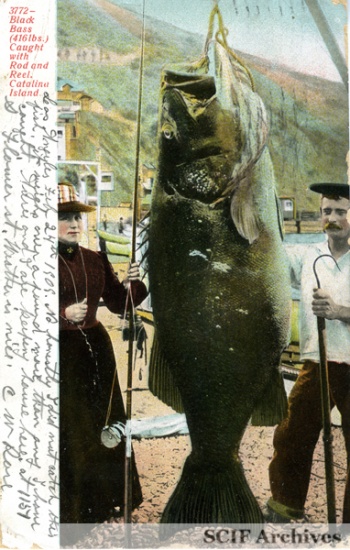 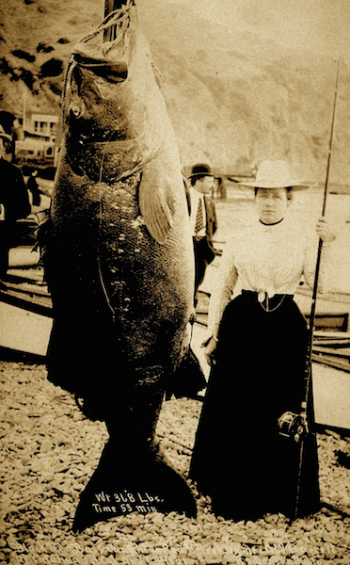 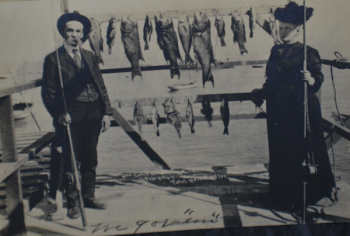 BARRETT, Andrew Washington “A. W.” (1845-1905) was born in Vermont to Joseph Barrett and Mehitable Noyes. He joined to Iowa Infantry in 1861 at the age of 16 and served in the Union Army in the Civil War. In his later years he became Adjunct General. He moved to Los Angeles in 1882 where he became a prominent businessman and Adjunct General of the California National Guard. He served as Superintendent of the Los Angeles Railway system, and as a contractor he built many of the roads in early Los Angeles.

Barrett married Lillie Jean Pierce and they had two sons:

General Barrett was a member of the Tuna Club, and he and his wife loved fishing at Santa Catalina Island. He became the club’s second president (1900-1901), after Charles F. Holder. (Originally the offices of President and Vice President were based on weight of fish taken and number of fish caught.)

Barrett died of prostate cancer at age 60. He is buried in Angelus Rosedale Cemetery. The town of Barrett, California, named for General A. W. Barrett, was renamed Sawtelle and later annexed to the City of Los Angeles. After her husband’s death, Pauline married Mr. Eckman.

July 30, 1901 [SFCall]: “Los Angeles, July 29 — Woman breaks record for big fish capture. Mrs. A. W. Barrett lands a specimen that weighs over four hundred pounds. The world's record for big fish taken under club considerations with rod and reel was smashed at Catalina Island Saturday by Mrs. A. W. Barrett, wife of the president of the Tuna Club. Her catch was a 416-pound Jew fish, measuring seven feet in length and five feet and eight inches in circumference, and was brought to gaff in three hours and five minutes.”

July 30, 1901 [LAH]: “R. F. Stocking's catch of two weeks ago was fourteen pounds heavier than Mrs. Barrett's, but according to the rules he invalidated his claims to the glory there was in it by giving his rod to a companion to hold for a short time. F. S. Schenck of Brooklyn, N.Y., held the world's record with rod and reel for several years, with a black sea bass that weighed 384 pounds. Mrs. Barrett brought her fish to gaff in true sportsmanlike manner, and is entitled to the honor her pluck has richly earned, but being a woman she is not eligible to the gold button the Tuna club voted to award to the biggest catch of the season. Mrs. Barrett is also the only woman who has ever caught a black sea bass in Catalina waters with a rod and reel. Two other women, the late Mrs. Ross Jackson of San Francisco and Mrs. William Beckman of Sacramento, made catches of big bass here, but it was done with hand lines, which is not up to sportsmen's standards.”

August 4, 1901 [LAT/SCat]: “Avalon. The photograph of Mrs. Barrett’s big fish, reproduced in The Times, was taken by Charles Ironmonger, who has done much splendid work of this character here.”

August 22, 1901 [LAT/SCat]: “Avalon. F. S. Schenck brought in his twenty-eighth big black sea bass yesterday. It weighs 230 pounds and required but twenty-one minutes to land… General and Mrs. Barrett left today. Mrs. Barrett has spent three months at Hotel Metropole, while the General has made frequent visits, as his duties as Bank Commissioner would permit, and both have achieved fame as anglers, Mrs. Barrett holding the world’s record for big fish.”

June 11, 1902 [LAT/SCat]: “Avalon. Mr. and Mrs. A. W. Barrett came over today for the season. They have a supply of tackle and have chartered George Farnsworth’s new boat, the Nestella.”

June 24, 1902 [LAT/SCat]: “Avalon. Mrs. A. W. Barrett, with the Fortuna, Dewey, skipper, had a fifty-minute séance with a tuna, which General Barrett says was larger than any brought in this season. She had it up alongside the launch, but the attempt to gaff it was ineffectual, and it dived under the boat, when the line struck the propeller and parted.”

July 4, 1902 [LAH]: “Avalon, July 3. — The Tuna Club held its annual banquet at the Hotel Metropole last night. In the bay window of the dining room a long table was spread for the twenty-four members and guests of the club and handsomely decorated with red rosebuds and carnations. The centerpiece was a marvel of the confectioner's art and stood in lieu of the usual baked tuna that was absent owing to circumstances over which the club members, or would-be members, had no control. Places were designated by cards bearing the printed name of each guest and the embossed crest of the Tuna Club in blue and silver. The scene was brilliant with innumerable electric lights, the individual intensity of which was subdued by delicately shaded globes. The gentlemen partaking of the banquet, which was served in admirable style, were as follows: Eugene Atwood, General A. W. Barrett, William R. Bentley, John Caffrey, Rev. F. W. Clampett, E. N. Dickerson, Colonel R. A. Eddy, R. W. Hersey, F. O. Johnson, Dr. H. W. Lance, General A. L. New, O. O. Orr, C. C. Paine, H. E. Paine, George S. Patton, J. H. Prince, F. J. Rabbeth, Frank V. Rider, A. M. Shields, E. T. Smith, Colonel John E. Stearns, William Wolff and representatives of the Los Angeles press. At the commencement of the banquet General Barrett, president of the club and acting as toastmaster, proposed that all should stand and in silence drink to the memory of Frederick S. Schenck, who would no more grace the board with his presence. Frank V. Rider, in responding to the toast, paid a fitting tribute to Mr. Schenck as a prince among fishermen and a gentleman of such sterling worth and kindly nature as to have endeared him to all who were so fortunate as to have made his acquaintance...”

June 13, 1904 [LAT/SCat]: “Avalon. General and Mrs. A. W. Barrett arrived at the Metropole yesterday. General Barrett is president of the Tuna Club, and it seems to be up to him to produce the tuna this year, as none have been reported so far. They are here for a month.”

June 13, 1904 [LAT/SCat]: “Avalon. General A. W. Barrett had the greatest sport of the season crowded into two hours this forenoon. With the Nestella he was cruising about the ocean some eight or ten miles out, looking for tuna, when they neared a big bunch of floating kelp, underneath which was a school of yellowtail and albacore. They were voraciously hungry, and snapped up the bait so rapidly that it was impossible to get it into the water before a big fellow seized it and made off with it. At the end of two hours the general had twenty-one yellowtail and five albacore to his credit, and was tired enough to quit.”

June 27, 1904 [LAT/SCat]: “Avalon. A. W. Barrett had the greatest sport of the season crowded into two hours this forenoon. With the Nestella he was cruising about the ocean some eight or ten miles out, looking for tuna when they neared a big bunch of floating kelp, underneath which was a school of yellowtail and albacore…”

July 12, 1904 [LAT/SCat]: “Avalon. Another tuna! General A. W. Barrett was the lucky man this morning. With George Farnsworth as boatman, at a very early hour they were afloat, and when off Empire, some three or four miles out, the boatman discovered there was something under the water…”

July 26, 1904 [LAT/SCat]: “Avalon. The acres and acres of tuna which were seen yesterday in the vicinity of Long Point are still there, but feed is so plentiful that they do not care to take the anglers’ bait… General Barrett, who managed to get two out of the bunch yesterday had a strike this morning, but did not succeed in landing the fish. Very few others were as lucky as he.”

August 12, 1904 [LAT/SCat]: “Avalon. Mrs. A. W. Barrett had as her guests out fishing this morning Miss Gillingham and Will Colmery. Miss Gillingham had a rather queer experience. She had hooked a yellowtail and had it well in hand when a huge jewfish appeared and with a single gulp swallowed her hapless yellowtail. This was more than the young lady had bargained for—two fish at one time and on a single hook, and the huge creature was rather more than she cared battle with. The boatman came to her relief, but the jewfish, after tugging for some minutes at the line concluded there was something wrong about his lunch and spat out the yellowtail.”

September 19, 1904 [LAT/SCat]: “Avalon. Mrs. A. W. Barrett came over this morning with some relatives to whom she is showing California, and which is incomplete without a visit to Catalina. They are Dr. and Mrs. A. J. Morrison of Indianapolis.”

1910: “The extraordinary nature of these [tuna] catches cannot be realized by the mere contemplation of a realistic photograph. The fishes look large, but they do not tell the story of hours of battling, the nervous and physical strain. Mrs. A. W. Barrett, wife of General Barrett, hooked a tuna off Long Point, and was towed about for seven hours before the fish was brought to gaff. This fish was an extraordinary fighter, having this way and that, hurling itself along the water; now plunging deep into the blue channel to the bottom, then coming up like an arrow from the bow, to dash in at the boat and circle it, performing a thousand tricks to demoralize the angler and wear her out; but all without avail.” [Holder, Charles F. The Channel Islands of California, 1910:71].

1910: “The black sea bass when alive is a handsome fish of the black-bass type, fin for fin. In the water he looks blue, but is, in reality, a dark mahogany tint above, lighter beneath. The eye is large, and blue. All in all, the fish is a dignified and attractive fellow. It would seem impossible that a woman could land such a fish with rod and reel, but numbers of notable catches have been made by women, notably that of Mrs. A. W. Barrett, of Los Angeles. [Holder, Charles F. The Channel Islands of California, 1910:110].